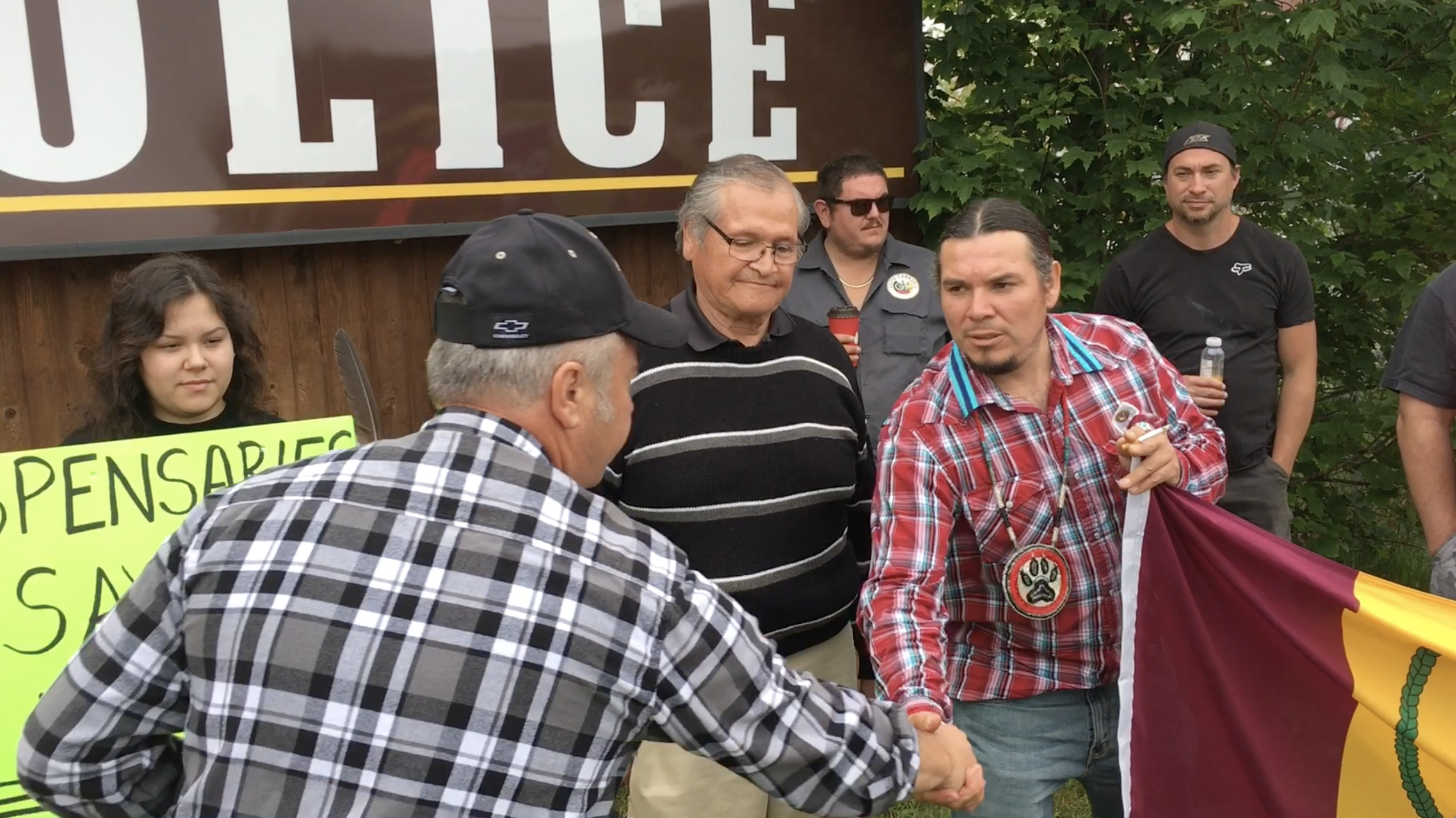 A new step in a dialogue was made on Sunday as Sergeant Jim Sayers of the Batchewana Police (OPP) agreed with dispensary owners that criminalization doesn’t work to address rights issues; and offered to “sit down, talk about it, come to an arrangement” as Anishinaabe people. OPP Provincial Liaison Team Constable Brian Speakman was on hand to “enhance security” and to get “more of an understanding” of the situation.

SAULT-STE-MARIE – Over 50 people attended rallies at police stations in Batchewana and Garden River FN on National Aboriginal Day. The rallies were held in protest of recent threats to raid indigenous cannabis dispensaries by Indian Act Band Councils and the Anishinabek Police Services.

The event began at 11:00am at the APS police headquarters in Garden River, but moved over to the Garden River APS detachment when it became clear that no-officers were at headquarters. Officers had been seen at the Garden River detachment, but refused to answer the door when protestors arrived. Grand Chief Del Riley delivered a speech on the topic on anti-Indigenous racism, and explained how the Indian Act could not bring justice on the matter.

When the gathering moved to the Batchewana Police station, Sergeant Jim Sayers of the Batchewana Police Department (OPP) and OPP Constable Brian Speakman of the Provincial Liasion Team were on hand to accept a letter from the North Shore Anishinabek Cannabis Association signed by Grand Chief Del Riley.

Brendan Syrette, owner of The Ranch, a dispensary and garden in Batchewana spoke before the letter was handed over. “A lot of us here are dispensary owners and the way it’s going right now is we’re being threatened with being charged with trafficking. I have no criminal record, nor do I wanna get in trouble. I’ve been straightforward, I’ve called our chief, we’ve all taken the due diligence to inform our people what’s going on. Unfortunately we are continually being threatened and under the fear of being charged… I was just given a letter from Tremblay Hall stating that I could be charged with trespassing for wanting to build the community garden that I am working on. Which is, to me, is nonsense.”

Syrette added: “this [Indian Act] system that we have on First Nations communities is a very racist system, it doesn’t let us be Anishinaabe. It’s an arm from the Minister. I’m Anishinaabe. I’m protected under the Constitution. And I have all rights to stand up for that Constitution. That’s part of our meeting today and we have elders still that are with us today who fought for that right so we can stand up.”

After Aiyana Soloman-Ward read aloud the letter to the police from the North Shore Anishinabek Cannabis Association, Grand Chief Del Riley addressed the officers. He said “We’ve lived in this racist, or I don’t know if not racist then Apartheid law of Canada, since 1876. I served five years in a Residential School where I received the most horrific treatment a human being could possibly endure. We want this racism to end, we want our Caucasoid immigrants who are now running the country to back off the racism. We can fix everything but we’ll have to work together…. We’ve got to develop our own economy, we can’t do it under John A MacDonald’s racist Indian Act. I think it’s going to be coming to an end all over Canada, the same thing is happening all over the place.”

Grand Chief Riley concluded his remarks by saying “I think the best thing is if we can sit down, we can figure this out, we can figure out all of the legal aspects of it. I was looking at the whole legal aspect of you have to be invited in by an individual in the reserve, Chief and Council are not individuals, they are a corporate body that can sue or be sued. There’s a lot of legal, technical problems associated with anything you do. What the best thing is: sit down and try to figure it out, because racism is gonna end one way or another and we’ve had enough of this, that’s about all I can say.”

Batchewana Police and OPP agree to meet and resolve issues

Sergeant Jim Sayers of the Batchewana OPP responded to the points made by Syrette, Chief and Riley, and the NSACA letter by offering to “sit down to meet.” He began by talking about his own first hand experiences of racism. As an Anishinaabe man he noted that he had taken the OPP and the Ontario government to the Human Rights Tribunal in order to ensure the equality of treatment of First Nations officers.

Sergeant Sayers said “So we know all about racism, suppression, we know all that stuff. Systemic racism can be fought against. We struck up a committee in Ontario for other First Nations within the OFNPA Ontario First Nations Police Agreement. That’s what we did and we fought that on our own so we were successful, I’ve been on both sides of this: I’ve been on roadblocks, been charged, blocked in MNR; and on the law side I learned the law, what’s applicable and you’re absolutely right the people have to sit at a round table and talk about it. Police can facilitate that.”

Sergeant Sayers explained how the people’s common identity as Anishinaabe could provide a solution to the issue. “We can do that as Anishinaabe people born and raised our lineage goes right back to the beginning of time, that’s where I come from, and that’s what I offer: to sit down with everybody so our community can heal together and stay together, work together whatever the issues are. Like Brendan said, going down to the court system doesn’t work. We know how it works, we know the shortfalls. It’s not the answer. So that I offer to everybody: sit down, talk about it, come to an arrangement, we’re all Anishinaabe.”

Constable Speakman declined to comment on the OPP’s June 4th, 2020 raid on the Territory of Oneida Nation of the Thames, stating that he “was not familiar with the details,” but that the OPP was getting “more of an understanding” by attending the rally in Batchewana. In Oneida, over 100 OPP officers raided three tobacco and three cannabis shops owned by traditional people at Band Council’s request. They pointed guns at a 14 year old girl, and tazered one man. The Band Council offices were occupied by traditional people for five days as a result of the raid.

Brendan Syrette responded to Constable Speakman’s comments by saying for the record: “I don’t give OPP any rights to come onto the reserve. As a First Nations individual I don’t give the OPP any right to come and take our stuff. That needs to stop, and I agree with Jim [Sayers] we need to sit down and we need to talk. We have a sacred fire burning, we lit that sacred fire, we’ve gotten a hold of Chief and Council, we’ve asked them to come. Out of all Chief and Council we had one of them show up. They talk about protocols, us as traditional people, as Ojibway people we also have protocols and it’s their duty to come and gather around that fire so that we’re not sitting there bickering.”

After Sergeant Sayers took the letter, the OPP officers walked away to the sound of the drum and the song, “OPP have no Jurisdiction.” Throughout both rallies, and with the interaction with police, the assembled Anishinaabe were peaceful and friendly, even good-naturedly laughing when Constable Speakman put his foot in his mouth by referring to Anishinaabe as “you people” on National Aboriginal Day.

Speeches from the Garden River Rally

After Riley’s speech, Aiyana Solomon-Ward of the Temple, one of the Garden River dispensaries, read aloud the letter to Garden River Police from the Ketegaunseebee Medzin Society.

The rally was then addressed by Derek Roque of the North Shore Anishinabek Cannabis Association who spoke about the red economy and the fact that there already is a safe and tested indigenous cannabis supply chain with Indigenous testing from Legacy 420 in Tyendinaga Mohawk Territory.

Frank Belleau of the Ketegaunseebee Medzin Society, then spoke about the failures of the Garden River Chief and Council to even talk with their members about the cannabis situation, and of the police oppression he has witnessed first hand.

Brandon Syrette of the Ranch, a dispensary in Batchewana which has been using its business profits to create a garden capable of feeding 1000 people, then addressed those gathered.