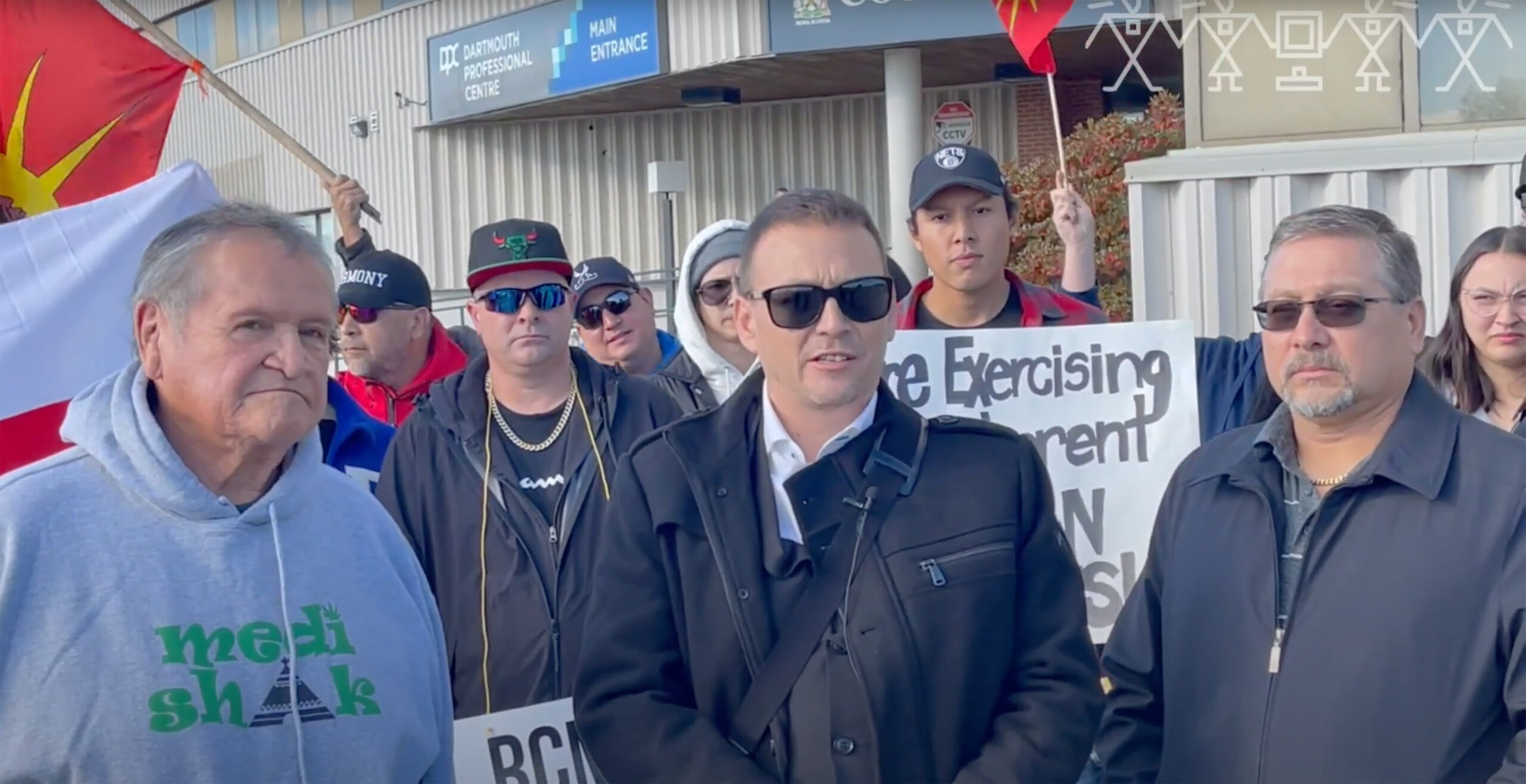 Among Councillor Googoo’s supporters was former National Chief Del Riley. In the 1980s, Chief Riley negotiated for the inclusion of Sections 25 and 35 of the Canadian constitution which enshrine the protection of Aboriginal and Treaty rights in the highest law of the land. Chief Riley, an Aboriginal rights expert with over 50 years of political experience, holds that Councillor Googoo and other Indigenous entrepreneurs have every right to sell cannabis, tobacco or any other product on their unceded lands.

Chief Riley, who has supported Indigenous cannabis entrepreneurs in over a dozen different Indigenous communities, said “I think we’re going to win, something really big is happening. People are realizing that the Indian Act chiefs and councils are just, as John A. Macdonald said, “an experiment.” The real authority stays with the traditional people because they are the only ones who signed treaties, not the elected [Indian Act] Chief and Council. Your authority lies all within the people. At some point in the future you have to figure out how to exercise it.”

Chief Riley stressed that the Province has no jurisdiction over Micmac* lands and rights. As he noted, “Real authority resides with the people – your nationhood. That’s what throws out the Province here. When it comes to rights, the Province is only an administrative unit of the Federal government. They can’t deal with your rights, they have to bring in the Feds. If you use Section 35 [of the Constitution] here, that’s what’s going to happen.”

Driving his point home, Chief Riley said, “You people have a fantastic opportunity, you own the whole Province here. You own it. They’ve never bought any of the land off of you. All of your rights are intact here. You’ve got to learn how you can maneuver and resolve your issues from the position that you still own the land and all the resources they’ve extracted from it.” Chief Riley’s statements echoed his presentation given at Millbrook First Nation in April of 2022 where he said Micmac people fighting for their rights, “are actually in a hell of a good position here.”

Support rolls in from other Micmac communities

Supporters of Chris Googoo and Indigenous cannabis rights came from other communities as well as Millbrook First Nation. Heather Knockwood, an Indigenous taxation rights activist came from nearby Indian Brook First Nation to show her support. She stated, “I came here today because of the Section 35 of the Constitution which recognizes and affirms the rights on Indigenous people…. I came here to try and understand what’s going on with Chris Googoo, because you see we’re here in Provincial court, and [that court] has absolutely no jurisdiction. I stand with Chris Googoo for the protection of our rights.”

Ms. Knockwood added that it was an Aboriginal right for different Indigenous nations to trade with other communities, and stated that the issue of cannabis was not unlike other resource issues Micmac people are facing, such as the fisheries, where a sharp fight has been ongoing. Drawing a comparison with the Donald Marshall fishing case which saw Canada’s Supreme Court recognize the right of Micmac people to enjoy a “moderate livelihood” from fishing, Knockwood said, “In a way I keep thinking that Chris Googoo is probably going to go to the Supreme Court with this. I’m proud to support him, because I think he’s very strong, strong enough to fight this.”

Albert Marshall Jr. from Eskasoni First Nation drove over three hours to support Chris Googoo. “I support Chris and our inherent rights to trade, something that we’ve been doing forever,” said Marshall. Marshall opened up his own dispensary in Eskasoni two years ago despite a band Council imposed moratorium. The RCMP raided his shop, but when he went to court to raise a constitutional challenge, the RCMP refused to show up to testify and all charges against him were dropped. As of this date, the RCMP has still not returned any of the products that they seized from Mr. Marshall.

Garrett Gloade, an elected councillor from Millbrook First Nation was also on hand to support Mr. Googoo. Councillor Gloade stated that, “We all need to be here to fight the government when it comes to things like this. Understanding who we are as Indigenous people, and realizing that the government doesn’t have a hold on how we govern our communities, is the step that we all need to take in exercising our rights. If Chris is successful here, this is going to set precedent across the country. People are going to recognize that name Chris Googoo just like they recognized Donald Marshall Jr. when it came to hunting and fishing.”

Councillor Gloade indicated that the struggle for Indigenous cannabis is just a part of a much longer struggle against colonial domination. Noting that Micmac lands remain unceded, Councillor Gloade stated “Our people utilized each and every resource… we need to get out of the colonial mindset and recognize that we have to exercise our rights to all resources, whether that’s going from fishing to cannabis, to tobacco, to [mineral] elements. We’re stewards of the land. These lands belongs to us. Non-Indigenous people came here and took and raped the land, and this is just us taking it back.”

Some protesters were surprised to see Bob Gloade, the Elected Chief of Millbrook First Nation show up at the rally since he had previously encouraged RCMP raids on sovereign Indigenous cannabis shops and publicly denied that selling cannabis at trading posts was an Aboriginal right. In a 2019 interview with Saltwire, Chief Gloade compared the unauthorized sale of cannabis on Nova Scotia’s First Nation reserves to “bootlegging alcohol,” and stated that “there is no treaty right protecting them in regards to selling, growing or distribution of cannabis whatsoever…. our treaty rights basically focus around hunting and gathering not growing and distribution.”

Saltwire also confirmed with Nova Scotia RCMP spokeswoman Cpl. Jennifer Clarke that the RCMP was working with Chief Gloade and his Council “to address the issue of the retail sale of cannabis on the reserve.” When asked if he would support RCMP raids on “unauthorized” cannabis shops in Millbrook First Nation, Chief Gloade responded by saying “​​Absolutely.”

These prior statements led to Chief Gloade receiving a somewhat frosty reception at the rally, with one crowd member raising the question, “How the fuck are we going to get rid of Bobby Gloade – legally?” before the Chief arrived.

While inside the court, Mr. Googoo was met by Charles Naugle, a Fuel and Tobacco Officer of Service Nova Scotia and Internal Services, who had carried out a raid on Mr. Googoo’s shop the week before.  Officer Naugle served Mr. Googoo a notice to appear for a court date on Nov 30th, 2022 to face charges of selling “contraband” tobacco. The raid and charges appear to be political motivitated, and follow a controversial Band Council resolution banning sales of “Mohawk Tobacco” proposed by Councillor and Director of Commercial Operations, James Stephens.

Councillor Googoo thanked Chief Riley and Chief Gloade and all the supporters for coming out to stand with him at the courthouse. “Exercising our inherent and treaty rights is something that all of our people should be doing freely without being harassed by any bodies of government, including Indian Act Chief and Council. I feel great to see that the people are standing up for our rights. At the end of the day, our nation is stronger than any province or anything. When our people come together it’s a force to be reckoned with, and I’m proud to see everyone here today and giving recognition to our rights and standing up for our rights.”

Chief Gloade is referring to the Community Consultation on Cannabis document created with the assistance of Kahnawake-based lawyer Scott Robertson, the husband of former Liberal Attorney-General of Canada, Jody Wilson Raybould. That document proposes the implementation of a cannabis regime controlled by the Band Council through an “independent” cannabis committee as established in Kahnawake. The “Kahnawake model” has been exported by consultants at great cost to numerous Indigenous communities, but does not actually regulate any cannabis enterprises in Kahnawake or Six Nations where it was attempted, because the Federal Government refuses to go along with it.

It is the position of Government of Canada as expressed by spokesperson William Olscamp, that “there are no specific authorities or definitions in the Indian Act for the regulation of cannabis.” And thus, the only Indigenous cannabis regimes that are legal to the government are those that are perfectly harmonized with the Federal and Provincial laws concerning cannabis, which means that all cannabis must come from Licensed Producers regulated by Health Canada.

The Mi’kmaq Cannabis Association (now the Micmac Rights Association) responded to the Band Council’s Community Consultation on Cannabis with a lengthy position paper of their own. The document stressed that “there is no place for an Indian Act Band Council that is the construct of Canadian colonial law to determine the laws and economic functioning of sovereign Indigenous people on unceded lands. The Mi’kmaq were never conquered. We signed peace and friendship treaties with the British. These treaties were introductions between our peoples and contained no surrender of lands or rights. Indeed, our ability and right to trade are explicitly discussed in the 1752 Peace and Friendship Treaty which states that any Mi’kmaq people are entitled to “bring for Sale to Halifax or any other Settlement within this Province, Skins, feathers, fowl, fish or any other thing they shall have to sell, where they shall have liberty to dispose thereof to the best Advantage.””

In an interview with Dispensing Freedom, Councillor Googoo, the founder of the Micmac Rights Association, noted that “inherent and sovereign rights don’t come from the Indian Act or the Band Council. These rights are expressed individually when we exert them, and as long as we are not harming our people with these rights, there’s nothing to discuss.” Chief Riley echoed this position, stating outside at the Courthouse, that “The government of Canada uses its Indian Act to suppress us and ensure that the Chiefs and Councils that were formed under this Indian Act have no authority anyway, to do anything.”

Chief Riley concluded the gathering on a positive note by stating that “the nations here are in a wonderful position in that all of their rights are totally intact in all of their land here. I know I’m on their land right now, because nobody bought it from them.”

We are using the older spelling of Micmac rather than the more recently introduced Mi’kmaq spelling in accordance with a request from former Atlantic Region National Chief and Putus, Hector Pictou, who explained that it was only after the government paid Bruce Wildsmith, a Law Professor from Dalhousie university, $2.5 million to represent Donald Marshall, that the term Micmac became spelled as Mi’kmaq. According to Putus, “The term Micmac is ours. It didn’t come from a court transcript, it’s our every day way to spell our identity, and it is the name on the treaties that were signed with our sovereign ancestors.”