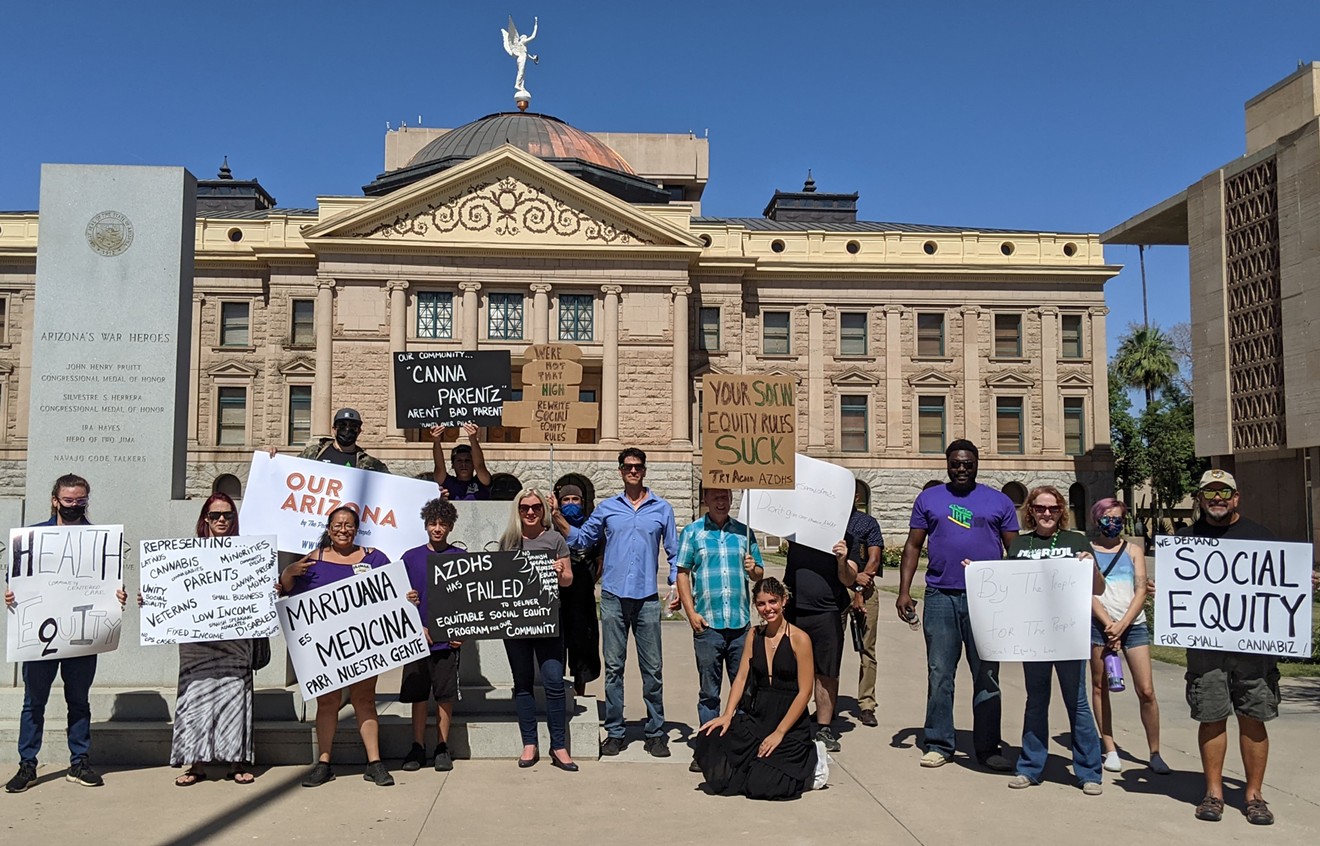 Not a Whole Lot of Equity in Arizona’s ‘Social Equity’ Marijuana Rules, Activists Say at Capitol

Cannabis advocates took their protests about the state’s “social equity” dispensary licenses to the Arizona State Capitol on Thursday morning, in a small rally that drew about two dozen people, including representatives from activist groups Arizona NORML and Our Arizona.

As Phoenix New Times previously reported, the state is handing out 26 “social equity” licenses for marijuana dispensaries via lottery and is in the process of drafting rules around them. Cannabis advocates say the rules around the social equity licenses – which are supposed to go to communities disproportionately affected by marijuana prohibition – actually further disadvantage those communities.

“It’s a shit show. It’s all fucked up,” said protestor Allison Stein, editor of The Kush Kronicles. “I don’t care who gets the licenses at this point; I just feel they need to be protected and they need to be for the community.”

People who win a social equity license in the lottery (which costs a non-refundable $5,000 “application fee” to enter) might not have the resources to open and operate a dispensary in their community, protestors said. But they can sell their social equity licenses immediately for millions of dollars, most likely to an existing cannabis corporation or deep-pocketed investors who are not based in communities that have been disproportionately affected by marijuana laws.

“These licenses can be resold. That’s the issue,” said Dr. Allen Harrison, a former chiropractor who for seven years fought felony charges related to being a caregiver for medical marijuana patients in 2012. (Those charges were ultimately dropped, he says.) “And they can be instantly resold. If they had to work it for five years, well, then, it’s reasonable. If they worked it and the community benefited, then it could be sold. But the way they’re doing it, it could be sold immediately. So the reality is, it’s widening the divide and it’s pharma getting corporate control.”

Attorney Tom Dean, who has represented clients impacted by cannabis laws for decades, announced the May 27 Capitol rally in a video on Facebook, saying, “We need a more diverse spread of licenses throughout the community. We’re fighting for licenses to be sold only to another social equity applicant.” (Dean reportedly had a family emergency and did not attend the rally.)

The grassroots group Our Arizona, which organized the Capitol protest, was founded to advocate for cannabis equity in Black, Latinx, and Indigenous communities. No one from those communities was brought in for dialogue about the social equity license rules, said a group representative named Nydia, who did not give her last name.

An Our Arizona organizer puts the finishing touches on a protest sign. Niki D’Andrea
“We need laws that can’t be changed. We need laws, not rules,” she said. “Why aren’t the people in Arizona raising hell? It’s because the information is being hidden, it’s incredibly difficult to decipher what is happening, and most people in Arizona don’t think that it’s an issue… legislators gave more information to the lobbyists than they did to the community. So, what does that tell you? It’s not people from the community who have a seat at the table.”

The rally was planned at the last minute, Nydia said, because AZDHS is drafting the rules this week. And it’s not easy to corral the community early on a Thursday morning, added a woman who identified herself only as Lydia.

“We’re talking about people that have literally been targeted and impacted for decades,” she said, “Now we’re adding in race, now we’re adding in poverty level, and let’s add in the global pandemic we’re all living through. What free time does this community have to be here at 9 a.m. on a weekday, during committee, to know what bills are passing through?”

“This is the Gold Rush of the 2000s,” Morrison said, “and they’re blocking people from getting into it.”