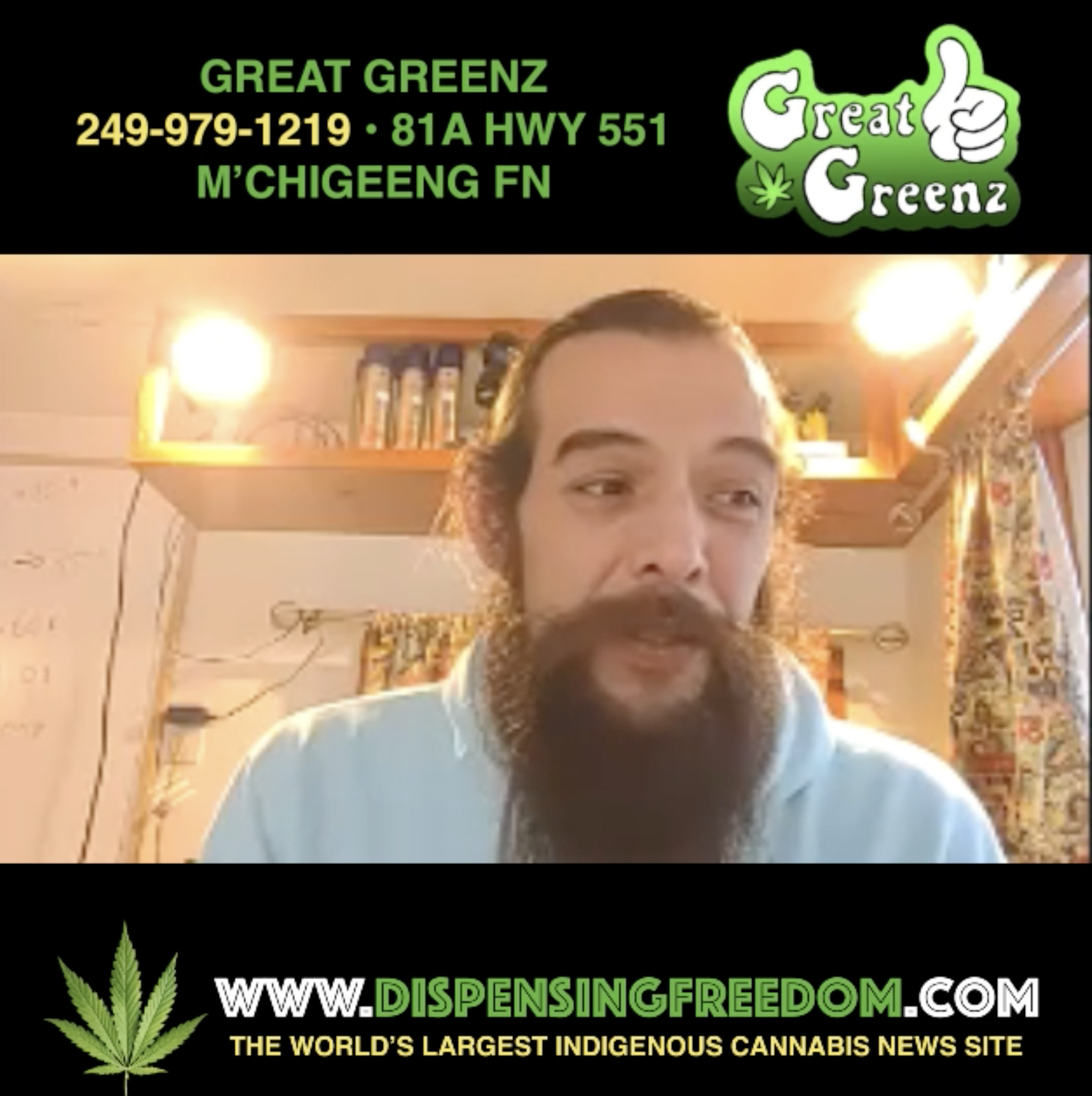 Dane Bebamash of Great Greenz is staying open, and has gained the support of constitutional expert Chief Del Riley.

M’CHIGEENG FIRST NATION – Dane Bebamash of M’Chigeeng First Nation believes he is upholding his Aboriginal and Treaty Right by opening a cannabis dispensary on his land. In doing so despite the opposition of the local Indian Act Band Council, Mr. Bebamash is following in the footsteps of more than 265 other sovereign Indigenous dispensaries operating on Indigenous lands across Canada.

In a recent video interview with Dispensing Freedom, Mr. Bebamash said that he’d been planning to formally enter the cannabis industry for years. After 15 years in the construction industry, Mr. Bebamash seriously injured his back, and has been unable to continue in that line of work. According to Mr. Bebamash, he’s had a lifelong positive relationship with cannabis, and “I’ve been waiting on my band do something on this issue, but they’ve been sitting on it for the last three years. I’ve been watching people go to other reservations and get their product legally and smoke it.”

The Chief and Council of M’Chigeeng First Nation have not been supportive of the cannabis industry. In September of 2018, one month before Canada legalized cannabis, the Indian Act council declared a moratorium, despite their lack of jurisdiction on the matter.

Deciding that the time had come to exercise his Treaty and Aboriginal Right to cannabis, Mr. Bebamash’s store opened his store on December 17, 2021. His store is open seven days a week, from 10am to 8pm at 81a HWY 551, and is already bringing him newfound freedom and independence. “I just started after a month, and I’m able to expand on my house more to put on a bedroom…. I’ve always lived hand to mouth, paycheck to paycheck, and never been able to put something away. But now that I’m able to put money into by business, into my house, and into my pocket, it’s a freeing [feeling].”

Mr. Bebamash added, “I don’t feel that what I’m doing is harmful. The substance I’m providing isn’t bad. I can do this with a clear conscience. I have the support of many in my community, and it’s aggravating and frustrating and saddening that that I have to go through this with my band.”

Mr. Bebamash’s shop was opened on a Friday, and the following Monday – December 20th 2021 – it was raided by the UCCM Police. The police removed cannabis and money from Bebamash’s property in violation of Section 89 of The Indian Act which reads “Subject to this Act, the real and personal property of an Indian or a band situated on a reserve is not subject to charge, pledge, mortgage, attachment, levy, seizure, distress or execution in favour or at the instance of any person other than an Indian or a band.”

Support is growing for Great Greenz

Believing in his rights, Mr. Bebamash decided to stay open in the face of the raid by the UCCM, and was back in business the next day. He started a petition, and in short order collected the names of over 170 community members who support him. An online version of the petition is also available for supporters to sign.

Mr. Bebamash’s family have gained the support of the country’s most renown Indigenous leaders, former President of the National Indian Brotherhood, Chief Delbert Riley. The 78 year old Chief is now acting as spokesperson for Mr. Bebamash and his family. Chief Riley decided to become politically active again after the discovery of the unmarked graves of 215+ children in the Kamloops Indian Residential School.

Riley has issued a letter in response to a letter from M’Chigeeng elected Chief and Council, and introduced himself as being a “Hereditary Chief of the Crane Clan of the Chippewa Nation, a former elected Chief of the Chippewas of the Thames First Nation, a former Land Claims Director and later President of the Union of Ontario Indians, and the last President of the National Indian Brotherhood (the forerunner to the Assembly of First Nations, which I helped to found). Among my achievements while President of the National Indian Brotherhood was the development and negotiation of Sections 25 and 35 of the Canadian Constitution which enshrine the protection of Treaty and Aboriginal Rights in Canadian law.”

Chief Riley informed Chief and Council that they lacked the jurisdiction to make any kind of cannabis “moratorium” or other regulations because “you only have the right to deal with the very specific, and highly limited responsibilities delegated to you under The Indian Act. In all of your actions, you are required to uphold the Canadian Constitution – including Sections 25 and 35 which protect the Aboriginal and Treaty rights of people such as Mr. Bebamash.”

Chief Riley indicated that the real rights holders are the traditional people, while the “M’Chigeeng First Nation” is a creation of the Indian Act and the Canadian Parliament. Chief Riley added, “While the “M’Chigeeng First Nation” is an entity that can sue and be sued, it is not an “Indian,” it did not make any treaties with anyone, and it does not have any Aboriginal or Treaty Rights. The sovereign rights holders on the lands known as M’Chigeeng First Nation are the Anishinaabe people like Mr. Bebamash who live in accordance with the customs and conventions of their people on their unceded lands – not the institutions of the Federal Government which exist to discharge the Crown’s fiduciary obligations to Indians.”

Chief Riley also wrote that “Mr. Bebamash has the backing of his family, as well as the support of over 176 community members who have signed a petition in support of his business. He is doing nobody any harm, and he has yet to receive a single complaint from a community member opposed to his operation. Mr. Bebamash’s store is operating in the same way as hundreds, or maybe even thousands, of other sovereign Indigenous cannabis dispensaries and tobacco stores across Canada – in accordance with the customs and conventions of their people, and without the need for license or regulation by the Province, the Federal Government, or The Indian Act band councils.”