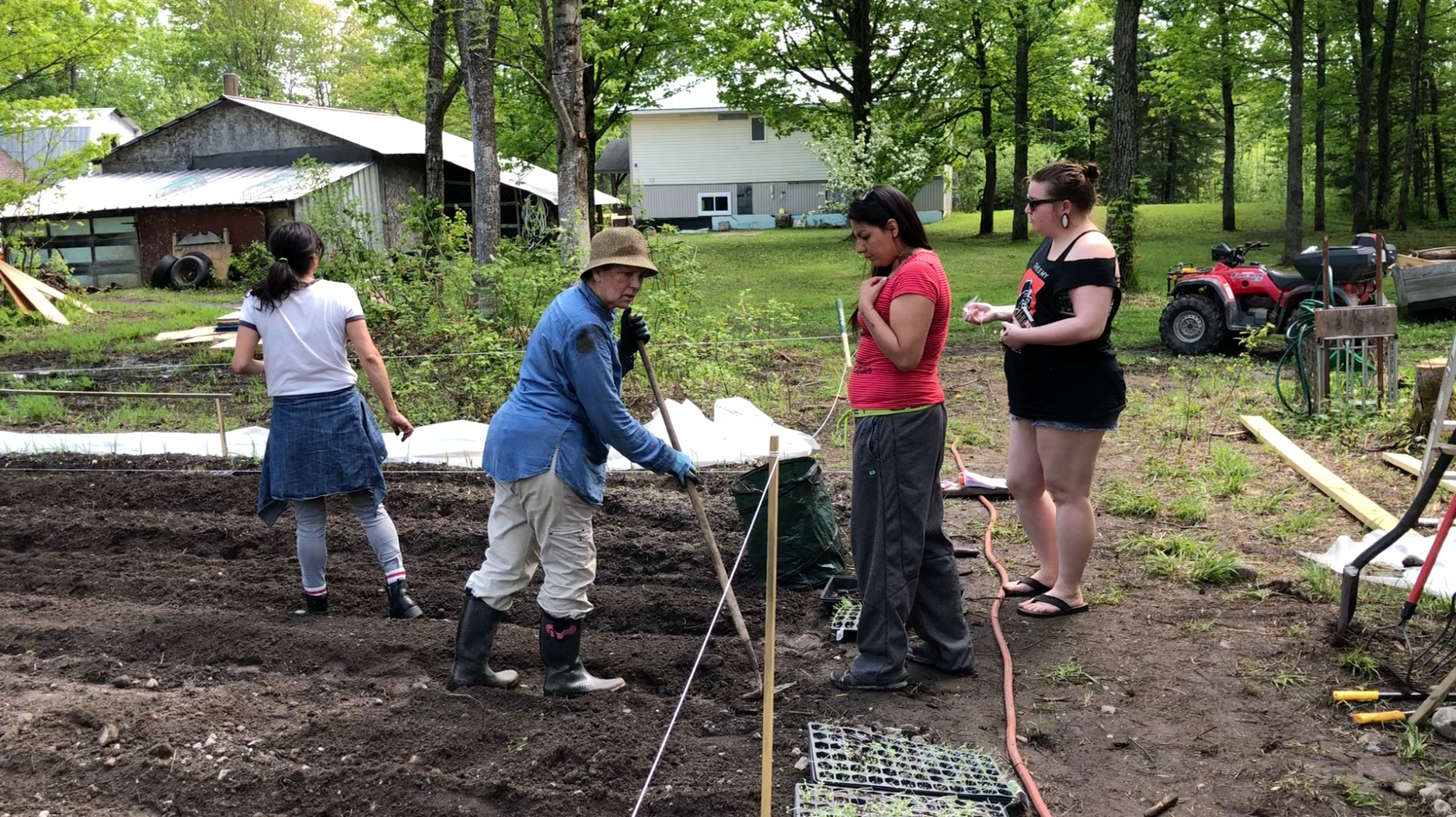 A dream comes true: The Ranch provides Batchewana with fresh grown food and cannabis as a medicine

But tensions are rising in Batchewana First Nation as the Band Council uses the Indian Act to try and shut down a community garden and dispensary on unceded Anishinaabe lands.

Rankin 15D – It sounds like a dream is coming true. Anishinaabe people on unceded lands are working together to build a garden capable of feeding 1000 people, funded by the Ranch, an onsite cannabis dispensary providing high-quality, scientifically tested, Indigenous made medicines that are benefitting elders and nearby locals. The garden is the brainchild of Brendan Syrette, an Anishinaabe Wolf Clan member and entrepreneur who is receiving a great deal of support from local community members.

The only problem? The Indian Act Band Council of Batchewana First Nation are trying to shut the garden and dispensary down. In an undated letter received by Syrette and two other community cannabis entrepreneurs on June 1st, 2020, Kim Lambert, the CEO for Batchewana First Nation, claimed that the distribution and sale of cannabis within the territory was subject to a moratorium passed by council, and thus “if you or anyone is found to be in contravention of this Moratorium, the proposed business owners and land owners could face potential criminal charges, including trafficking.”

A separate “cease and desist” letter concerning the garden was sent by lawyer Jennifer Tremblay-Hall on behalf of Band Council and was served to Syrette on May 27, 2020. This letter claimed that “any actions or occupation of any kind whatsoever” outside of the Syrette’s parcel of CP land on the reserve is “considered unlawful possession under s.20(1) of the Indian Act and constitutes trespassing.”

Feeding the people, freeing the land

Syrette for his part doesn’t feel like he’s doing anything wrong. According to him, he’s merely living according to his responsibilities to provide for his people. The land that the community garden is situated upon is right behind his family’s CP lot, on ten acres of farmland that his family was granted 30 years ago as attested to by Albert Sewell, a Council member at the time who was present in the initial survey of the lot. The current Chief and Council, led by Chief Dean Sayers, state that there is no official paperwork to back up this claim, and insist that the garden must be removed. But all the lands to the north of the Syrettes’ CP lot where the garden is located, are wilderness lands unused by other members of the community. In fact, if one were to walk due north from the garden, it would take over 10 kilometers of trekking to even reach a road.

In a video posted to his Facebook wall, Syrette states “I’m not a criminal, I don’t bring harm upon other people and I never will. That’s not what I do.” Syrette adds, “What’s happening with our people? Why can’t I build a garden to feed 1000 people? Where is this coming from? Who gives those people [Chief and Council] the power to tell me that I can’t utilize this land that’s sovereign nation land – unceded sovereign territory? I’m not taking the place where they’re going to build a home. I’m taking a place where we can actually build a food plot and bring some livestock in and actually help our community grow and help our people with good food.”

As in the case of over 160 other sovereign indigenous cannabis dispensaries, Syrette has found the cannabis plant to be the gateway to healing and economic independence.  “In this case I found a beautiful relationship with cannabis – a wonderful medicine. Miishkonhs. It’s a very strong medicine and it helps. I’ve witnessed this. I’ve been a part of it. I’ve given people who don’t believe in CBD or THC and we’ve helped them along their path. We’ve helped them with gout, with arthritis, we’ve helped them with so much. That’s what we do as Anishinaabe people. And with some of the proceeds we’re building a sovereign community farm for our people to feed 1000 people.”

Community support for the Ranch growing

However, the opposition from the Band Council is hardly unanimous. Councillor Mark McCoy accepted Syrette’s invitation to visit the farm, and he liked what he saw. “I think Brendan’s vision here is a great idea. He’s making food for the community, we have community members here working and volunteering their time, tons of donations are being given here. It’s nice to see.” Reflecting on the food insecurity within Batchewana, Councillor McCoy stated “our youth are eating Kraft dinner and processed foods all the time. Here we have natural foods straight from Mother Earth. No chemicals, just good natural food. It’s good.”

Other community members such as Robyn Eshkibok have come to express their support for the Ranch and their gratitude for the garden. Eshkibok is a US combat veteran suffering from PTSD who has found great healing benefits from spending time at the Ranch and working in its garden.

According to Eshkibok, “This won’t stop. I’m not going to stop gardening. I’m not going to stop consuming medication that I directly benefit from, and even my children [use a non-psychoactive cannabis topical for their] eczema. I just want to say Chi-Miigwetch to my friends and the Ranch to allow me as a combat veteran to come to a place where I know there’s a lot of love and teachings and patience happening.”

Syrette has been receiving support far and wide for his cause. He was especially grateful that Chief Del Riley, a hereditary Crane Clan Chief and former leader of the National Indian Brotherhood, and author of Sections 25 and 35 of the Canadian Constitution Act, came to visit the Ranch to offer his support. Chief Riley, a respected elder who has never strayed from the path of Indigenous sovereignty and nationhood, has been touring Anishinabek communities on the North Shore to provide support to local entrepreneurs entering the cannabis industry.

Riley considers the threats from Band Council and its lawyer to be frivolous and lacking in any legal merit. According to him, Band Council resolutions are mere statements of intent, and they have no power unless the traditional rights holders on unceded lands agree to them. And as for the threat of a police raid, Riley doesn’t think it will hold up in court. “The problem is that the OPP don’t have jurisdiction according to their own system. The reserve is Federal land, and they’re only Provincial police. Who covers the liability if something happens to them and they get hurt? Even if they are invited in, nobody has sat down and figured out the law on this. The OPP cannot enforce Federal laws like the Indian Act on reserve.”

According to Section 88 of the Indian Act, Provincial laws of “general application” apply on reserve, but they are “subject to the terms of any treaty” that apply. Because Indians have an Aboriginal Right to their own medicine and sustenance from the land, Riley argues that the Band Council cannabis moratoriums are unconstitutional and in violation of Section 25 and 35 of the Canadian Constitution.

As things now stand, Syrette and the other entrepreneurs have responded to the letters from Band Council and their lawyer, and are digging in to grow their garden and their business. Visitors and supporters are welcome to drop by the farm anytime.

As Syrette says. “I’m asking you guys to stand up. To rise up with us. Yesterday there was a bunch of people out here all taking part in planting a garden. Elders to little kids. That’s such a beautiful thing. Nobody’s going to give us money to do that. But we found something beautiful. We help somebody with a little bit of medicine, and we can grow some food. We’re not asking for nothing. It’s not about asking for anything, it’s about what we can do for our people.”

The Ranch is located at 1564 Old Garden River Rd in Rankin First Nation. Click here to follow them on Facebook. The Band Council of Batchewana First Nation was asked for comment on this article but have not replied as of press time.