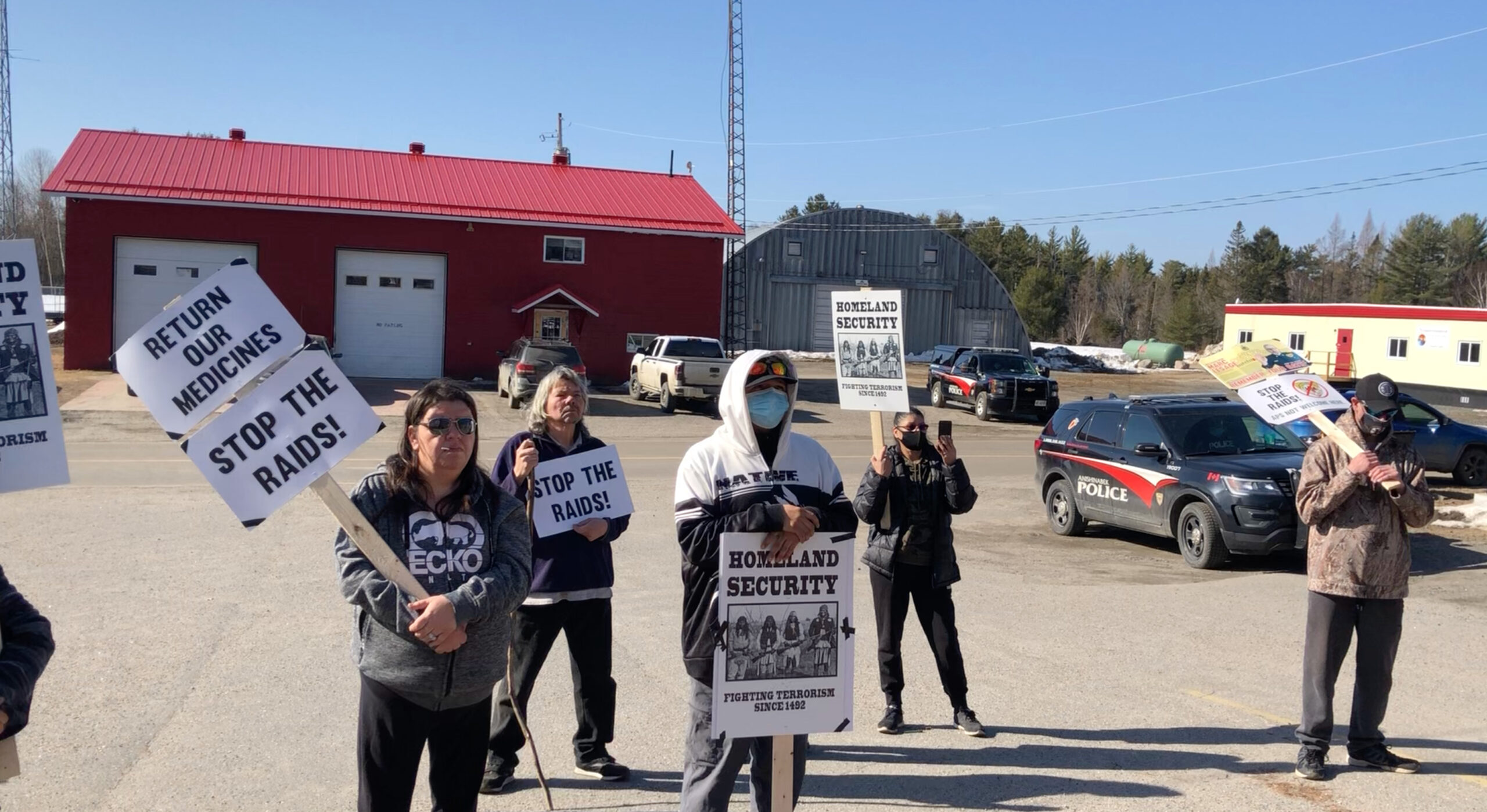 Although Band Council Chief Wayne Pamajewon insists he had nothing to do with the March 11th Anishinabek Police Services (APS) raid, documents from police suggest otherwise. The APS has agreed to meet with Hereditary Chief Riley in mid-May.

SHAWANAGA FIRST NATION – About two dozen people gathered at the Shawanaga Band Council office on Monday, March 22nd to rally against the March 11th, 2021 raid by Anishinabek Police Services on the High-Way 69 Medicinal dispensary. The group was led by Hereditary Chief Del Riley, a former head of the National Indian Brotherhood, and one of the main authors and negotiators for the sections of the Canadian constitution which are meant to safeguard Aboriginal and Treaty Rights.

The gathering began in the parking lot of the High-Way 69 Medicinal Shop on Hwy 69 in Shawanaga. The group had originally intended to convoy to the Anishinabek Police Services office in Wasauksing – the detachment from which the March 11th raid originated – but instead went to the Shawanaga Band Council. The rally changed location because Shawanaga Band Council Chief Wayne Pamajewon requested police presence for a possible demonstration at the Band Office. The APS office in Wasauksing announced that it would be closed down for the day, and that they would come to Shawanaga. On the day of the rally, six OPP cruisers were on location to close down Highway 69, while another four APS vehicles were parked at the Band Office.

When the group arrived at the band office, Chief Riley gave a speech from the deck of the building. Speaking of the raid on High-Way 69 medicinal dispensary, Chief Riley said “the same thing is happening all over the place. History is moving along and sometimes they try to hold us back and keep us under these old racist laws which are still in place. The only good thing is that Sections 35 and 25 now protect your rights. But the problem everyone has is [knowing] what are our Aboriginal and Treaty Rights.”

When Chief Riley was National leader of the Indian Brotherhood, he helped to write and negotiate Sections 25 and 35 of the Canadian Constitution. In the lead up to the constitutional debates of the 1980s, Chief Riley says he “probably lobbied every cabinet minister several times” and he opened a political office in England to serve as a headquarters to expose Canada’s wrongdoings internationally. It was these international efforts that Chief Riley believes were instrumental in getting Sections 25 and 35 added to the Constitution. Jean Chretien, then the Minister responsible for constitutional negotiations, made a handshake deal with Chief Riley that if he closed the office in England down, the sections protecting Indigenous rights would be added to the Constitution as the National Indian Brotherhood demanded.

In his speech in Shawanaga, Chief Riley said in reference to Aboriginal and Treaty Rights, “those rights supersede both Federal and Provincial law. The Province is not a state. They can’t enforce anything on your lands at all. Even on your treaty areas… You own all the land. It’s been a big delay since the constitution got accepted. But now our people – not just here but all over the place – are trying to learn what their rights really are. But they also need to know that those rights will always supersede both Provincial and Federal law.”

Chief Riley was critical of the Indian Act Band Council system, noting that when “John A. Macdonald set up the racist Indian Act, he also created the Chiefs and Councils. And actually, they shouldn’t be called Chief and Councils, because they’re just ‘John A. MacDonald clubs.’ He never gave them any authority.”

“It’s changing now. Now you need to know. You’ve got a situation here that your only real authority is your traditional people. Whoever holds your various clans. That’s the only authority you’ve got because Chief and Council are servants of the Minister. He pays them. The only authority that they actually have is within the Indian Act. They’ve been using the Indian Act to hold you down, to ensure that you were never able to develop an economy. You’ve got to develop an economy.”

Chief Riley concluded by saying, “There’s a lot of work to figure out how this will all come out in the end. But your rights are there, and they are guaranteed, and that can’t change.”

After Chief Riley’s speech, a group of about a dozen band members met with Shawanaga Indian Act Chief Wayne Pamajewon, and Sergeant Dory Cook of the APS. Sergeant Cook did not participate in the meeting, but after the rally he agreed to meet with Chief Riley and representatives of the store to discuss the matter further. He said he was unable to make a public comment when asked to speak on the record to Dispensing Freedom.

After the rally, Chief Pamajewon spoke with Dispensing Freedom in an interview given in the Band Office. Pressed as to why the raid happened, Elected Chief Pamajewon denied that he had put pressure on the APS to raid the store and stated that, “Most certainly it didn’t come from us.” He added, “What we expect is if you’re out there breaking the law and you have knowledge of that, shouldn’t you be charged? It’s just like a highway stop. If you’re crossing the centreline or speeding you’re breaking the law. This is no different. You’re doing something wrong.”

When asked about why the police didn’t raid the Blue Sky Women trading post, which sells “unlicensed” tobacco it purchases in Six Nations on the basis of the same sovereign rights as the High-Way 69 Medicinal Shop sells cannabis, the Elected Chief said “Technically, yes [they are breaking the law]…. Many communities allow these people to come into our communities, they weren’t even native, half these people. They were organized crime that was involved with the tobacco industry.”

For Elected Chief Pamajewon, Aboriginal and Treaty rights to medicine and the tobacco and cannabis trade are “totally different” from hunting and fishing rights which he sees as being protected by the Robinson Huron Treaty. But the real sticking point for him – in a community where there are no private businesses except for the Blue Sky Woman Trading Post and the High-Way 69 Medicinal Shop – is that those businesses should not be operating without a permit from his Indian Act Band Council.

“Band members if they want to get into business… you come here and you speak with [the economic development officer] and that creates a paper trail… Eventually, once the business plan is put together, it’s brought to this table and the support will be given to it here for that opportunity to move into reality.”

Although Chief Wayne Pamajewon was adamant in his denials that he had called on the APS to raid the High-Way 69 Medicinal Shop, a police liaison indicated to a Shawanaga member involved with the store, that the Chief had indeed given them paperwork indicating that an “un-permitted” medical cannabis store was operating on the territory and that should it not be immediately closed, “we will have no choice but to take further action and to request that the Ontario Provincial Police carry out an inspection of the Property on our behalf.”

You can support the High-Way 69 Medicinal Shop by signing their petition of support.