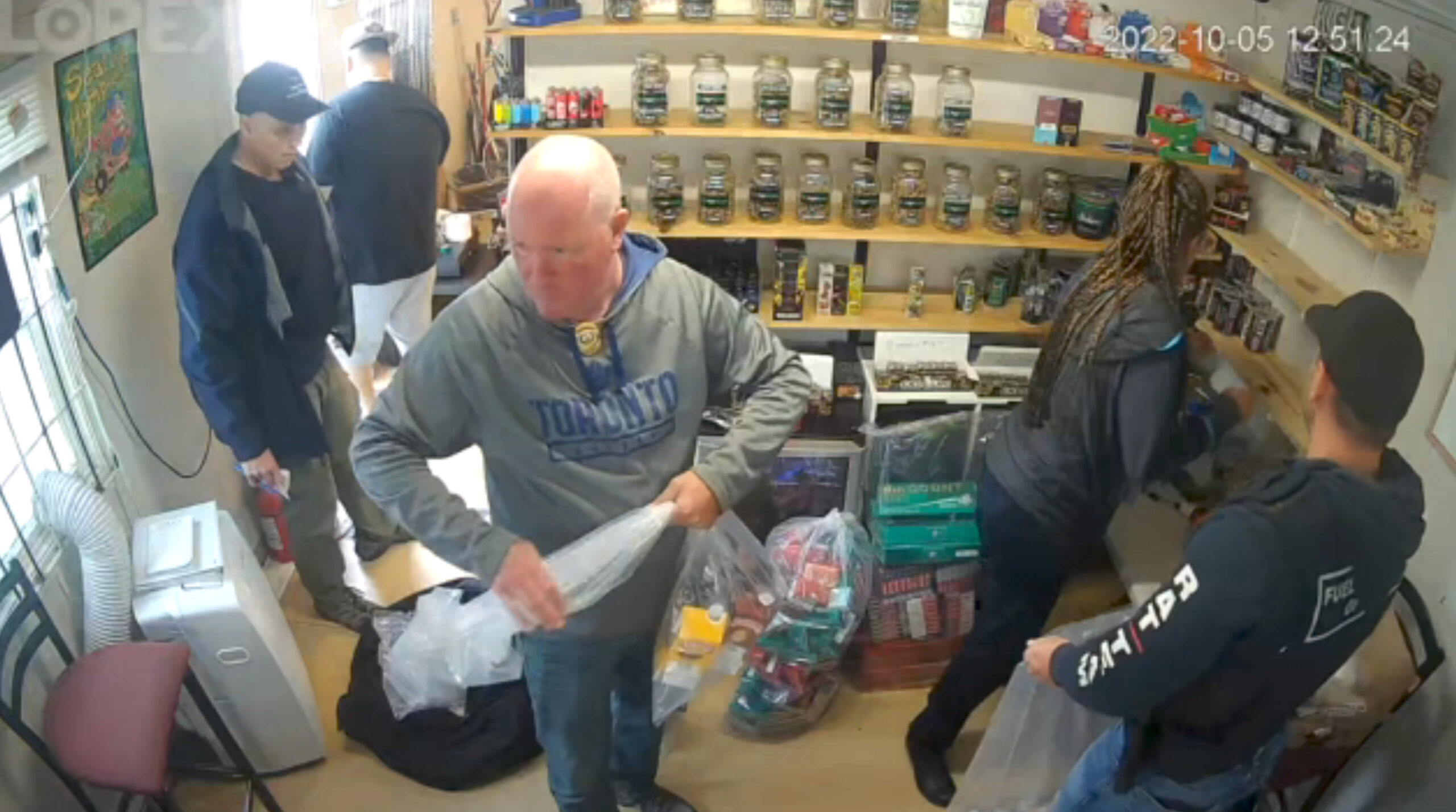 COLE HARBOUR, UNCEDED MI’KMAQ TERRITORY – On Wednesday, Oct 6th, the RCMP escorted Charles Naugle, a Fuel and Tobacco Officer of Service Nova Scotia and Internal Services, into Cole Harbour, a district of Millbrook First Nation, where he and another officer proceeded to confiscate tobacco products sold at the High Grade Smoke Shop.

According to store employees, Officer Naugle – who is a Provincial agent with no jurisdiction on Federal or Indian lands – took at least four boxes of smokes, tobacco chew and nicotine vapes, valued at around $30,000 retail. The paperwork left by Naugle indicated that the retail vendor was at fault for having and selling tobacco “on which tax had not been paid” and which did not have “a prescribed mark” required by Provincial law and which was purchased from a vendor other than one approved by the Province in contravention of the Revenue Act S.N.S. 1995-96. Of note, the words “Indian,” “Indigenous,” and “Treaty” do not even appear once in the entire text of the Revenue Act.

Millbrook First Nation Councillor Chris Googoo, the owner of High Grade Smoke Shop was outraged at the theft from his store and the violation of his constitutionally protected Aboriginal and Treaty Rights. In a post to his Facebook page, Googoo wrote that “I am not in any agreement with the Band and or in any other tobacco agreements with the Province or any other government bodies. This provincial Tobacco act has literally nothing to do with me period.”

Indeed, the actions of Officer Naugle are perplexing as they violate well established Canadian law, and Provincial authorities have no jurisdiction on Indian lands. As Googoo noted, “the Royal Proclamation of 1763 protects me against taxation. And the Indian Act sections 87, 88, and 89 protect me and my property from illegal seizures. Treaty rights are constitutionally protected, under Section 35 of the Constitutional Act which affirm and recognize our inherent and treaty rights.”

Officer Naugle declined to comment for this article when reached over the phone, stating that he was “not a person capable of making comments to the media” as he was “the lowest person on the chain of command on this issue” and said that a superior officer would speak of his behalf. The RCMP detachment responsible for Cole Harbour were also asked for comment and have not replied as of press time.

Raid comes in the wake of controversial council decision

The raid on the High Grade Smoke Shop comes in the wake of a controversial decision made by a minority of Millbrook First Nation Chief and Council members on July 27th, 2022 when they passed a motion to ban the sale of Mohawk tobacco on their territory and stated that they would call the RCMP to raid shops that continued to sell sovereign Indigenous tobacco. This initiative came from the Band’s Director of Commercial Operations, James Stevens, who is also an elected Band Councillor, and was seconded by Councillor Anissa Blackmore.

At the July 27th Band Council meeting, Stevens provided Council with a report claiming that the Millbrook Indian Act Band Council was losing hundreds of thousands of dollars due to customer preference for Mohawk rather than Canadian cigarettes. There are several shops on the reserve selling sovereign Mohawk tobacco, and nine other stores selling only Band Council approved, Federally and Provincially stamped tobacco.

According to the July 28, 2022 report from Stevens, the band is currently stuck with $628,850.00 in overstock inventory of Canadian government tobacco which nobody wants to buy. This product holds an estimated sales value of $807,020.50. According to Stevens’ projections, there will be a 9000 carton overstock position by year end, meaning an excess of 700,000 grams of tobacco, leading to what he calculates as an estimated overall lost profit of $400,000 for the Band’s commercial operations.

At the council meeting, Stevens, who is paid for being both an elected Band Councillor and a Band Council employee, put forward a motion to stop the sale of “Mohawk tobacco” with the proviso that if the sovereign shops didn’t stop selling it, Band Council would direct the RCMP to raid the stores.

According to one Band member who was present during the meeting who wishes to remain anonymous, “The motion was made due to the fact that we have a tobacco agreement with the Province. The motion said that it would give those establishments selling Mohawk tobacco two weeks notice to stop, and that if they didn’t, Chief and Council will direct the RCMP to take action on those shops.” According to the member, James Stevens also said that, “We were instructed by the RCMP that if there were other illicit products in those stores, such as mushrooms or cannabis, that they would be taking everything.”

In order to get the motion passed, Stevens insisted that Councillors Alex Cope, Chris Googoo, Carley Gloade, Lisa Marshall, and Steven Marshall leave the meeting, claiming that they had a “conflict of interest” because they had a connection to tobacco sales in the territory. Two other councillors – Natasha Benard and Ward Markie – were not present for the meeting. Councillor Garrett Gloade abstained on the vote, and he has now indicated to council that he wants his vote changed and registered as a no vote.

The vote was ultimately passed with only three of twelve Millbrook First Nation Band Councillors voting in favour of it (James Stevens as the mover, Anissa Blackmore as the seconder, and Zachary Julian). Zachary Julian has since indicated that he too is not in favour of the motion, and said that he felt rushed and pressured into making a decision without having enough information to make a proper decision.

This means that decision to try and shut down the sovereign tobacco industry was supported by only 16% of Millbrook First Nation Band Councillors voting in favour of it. If Councillor James Stevens is indeed in a conflict of interest, in that he is also a Band employee running the economic development department whose own bottom line and job opportunities will be greatly impacted by the decision made to ban sovereign tobacco, the motion was only legitimately supported by one councillor, Anissa Blackmore.

“There’s no conflict of interest when it comes to exercising your rights!”

Chris Googoo who was one of the Band Councillors excluded for a “conflict of interest” is exploring options for legal action as a result of the decisions made in the meeting. In a Facebook post on July 29th, Googoo wrote, “I am seeking legal action against another councillor that made a motion for our shops to be raided for Mohawk tobacco yesterday, breaking our constitutional rights as sovereign peoples of this land of ours. This councillor was 100% in a conflict of interest when making this motion, because they are a councillor, and also a band administrative employee, and should of left that meeting like the rest of us that were in conflict. There needs to be accountability for anyone breaking policies for their own agenda.”

Selling tobacco as a trade item is a constitutionally protected Aboriginal and Treaty Right for Mi’kmaq people living on their unceded lands. According to former National Chief and Hereditary Chippewa Crane Clan Chief, Del Riley, Mi’kmaq owners of stores or “truck houses” have the Aboriginal and Treaty right to sell tobacco grown and produced by Mohawks, and are continuing a centuries long nation-to-nation trading relationship with the Mohawk people by doing so.

According to Chief Riley, “The fact that customers prefer Mohawk made product to Canadian products does not give Band Council any right to call in police to raid shops. If anything, that should be an incentive for all the stores to sell Mohawk or other Indigenous tobacco products and to make the best business they can.”

Chief Riley also noted that in excluding the council members exercising their rights, the Band was putting itself in legal jeopardy. “You can’t have conflict of interest when it comes to exercising your rights – you have the right to do it, full stop” said Chief Riley.

Chief Riley is returning to Millbrook First Nation for a series of events from October 11-13th.

Millbrook Chief Bob Gloade, Councillor Anissa Blackmore, and Councillor and Director of Commercial Operations James Stevens were asked to provide comment for this article but have not replied to the request.