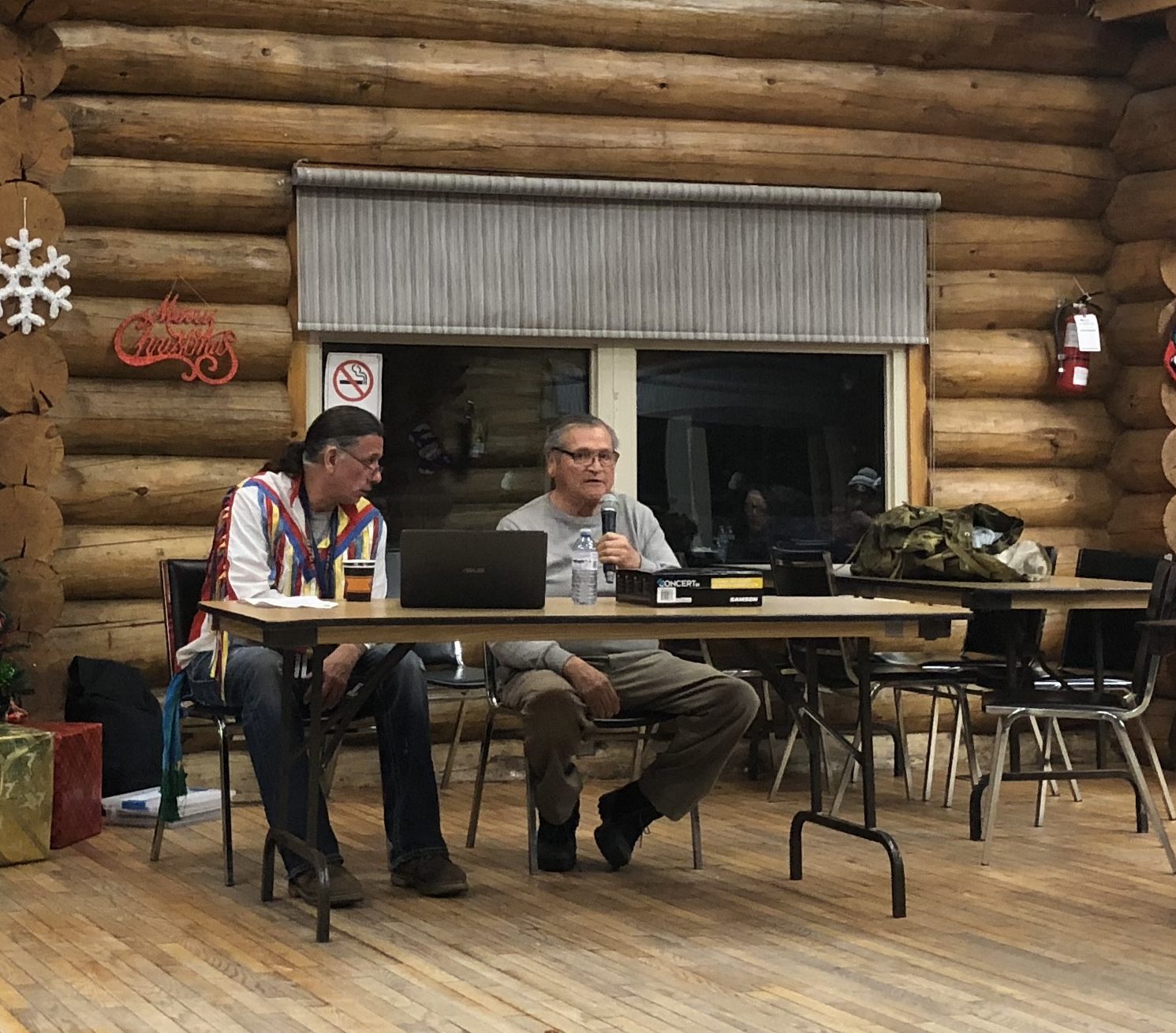 Del Riley, former leader of the National Indian Brotherhood, and co-author of Section 25 and 35 of the Canadian Constitution explains that Indigenous people have the “Aboriginal Right” to operate cannabis dispensaries on their lands in accordance with their custom and conventions.

GARDEN RIVER FIRST NATION – Over 60 people gathered in the community centre on Thursday, December 19th, 2019 to hear Del Riley, a former leader of the National Indian Brotherhood, and co-author of Section 25 and 35 of the Canadian Constitution, speak about the Indigenous right to run cannabis dispensaries on their own lands. The evening’s event came in the context of a recent raid on an Indigenous cannabis dispensary in the territory, and a 50 person strong rally outside of Band Council offices held in protest of the raid.

Those gathered enjoyed a fully catered meal of penne and meatballs and chicken cutlets with roasted potatoes before getting down to the discussion at hand.

At the meeting, Riley argued that Indigenous cannabis dispensary owners “have the right to continue the operation of the shops that you have,” and suggested that “Section 35 is what we should use to move forward with the cannabis issue. It connects with Section 25, and both are extremely important.” These two sections of the Canadian Constitution were incorporated after a process of lengthy constitutional negotiations involving the National Indian Brotherhood, which Riley led at the time.

Frustrated with the constant court battles over hunting and fishing rights in the 1970s and 1980s, Riley worked to get constitutional protection of Indigenous rights recognized “in the highest law of the land – the constitution – that way everyone has to observe it.”

Sections 25 and 35 of the Canadian Constitution

Riley explained that the real reason the sections were added came as a result of a quid pro quo agreement with then Minister Responsible for Constitutional Negotiations, Jean Chretien. At the time, Riley and his co-thinkers had opened up an office in England and were using it to lobby around the world for Indigenous rights. As Riley recalled, “Jean Chretien pulled me aside in one of the committee rooms in Ottawa and says, ‘Mr Riley, If you close your office in England, we will give you your protection for Aboriginal Rights.’ And that’s how it really got in.”

Riley explained, “We put in Section 25 so that they can’t deviate from the logical meaning of it. The wording was put together with all First Nations [people] sitting around the table and writing it. We put it in as strong as we possibly could so no courts could get around it if they were making laws.”

Section 25 of the Constitution reads:

Riley noted that, “Section 25 incorporates the Royal Proclamation and the only reason we put that in was so the rest of the First Nations in the Country wouldn’t get weaselled out of their rights. If the British government is to take any land from you, they have to follow a process.”

Section 35 of the Constitution reads as follows:

Riley said that the power of Section 35 was obvious from the fact that it has been so successful in winning legal cases, stating that “right now we’ve won something like 283 straight cases on Section 35.”

Interestingly, at the time that the sections were written, there were no commonly agreed to definitions of the term “Aboriginal and treaty rights”. According to Riley, “When we put in aboriginal and treaty rights, there was no definition of it. And we had to lobby to ensure that they included protections even without a definition. Canada thought the real definition of Aboriginal rights was encapsulated in the St. Catherines’ Milling decision, and that we only get usufructuary rights [rights to use the land]. They finally let it go, but I knew in the end that one day it would come back, and guess what, the only person that can define Aboriginal treaty rights is us. No court judgement, no fictional legal argument can change that. That’s really important.”

The main focus of the meeting was to discuss the status of the four Indigenous cannabis dispensaries that are currently operating in Garden River First Nation. While Riley made clear that he didn’t want to offend anyone, he explained that “the problem that your councils have is that they have no authority in this area [cannabis] at all. The Indian Act doesn’t deal with it. They have no authority…. That’s where they stand, and Indian Affairs didn’t know what to do because they can’t get around Section 35 either.”

Riley continued, “Where that leaves everything is in limbo really. What have we got left? We’ve got to go to what our traditional way of dealing with this. And you’re not going to find it in books. You’ve got a situation where businesses have always been allowed to happen in First Nations. That means that there’s been passive acceptance of the community of it, which is their Aboriginal Right. The province and the feds can’t touch that. Chief and Council has nowhere to turn because the Indian Act doesn’t deal with that and they have no authority. In the future you’re going to have to work something out so that everyone in the community can get along.”

The key issue that Riley kept pointing to is that the Band Council Resolutions or Cannabis Control Bylaws being passed by Band Councils to regulate cannabis, are just another form of Federal legislation that violates Section 35 constitutionally protected Aboriginal Rights. Because Indigenous people nowhere gave up their rights to grow, harvest and sell plants like cannabis in their traditional territories, the Constitutional protections of Section 35 trump Band Council, Provincial and Federal Laws.

For Riley, Band Council is a dead end. “They have no authority, all they can do is throw an ad-hoc committee at you.” Riley added, “Chief and Council is a product of the Indian Act and the Minister controls everything and can deny any decision they make. So you have a problem there too. There’s no real way of dealing with it. But with cannabis you’ve got an area that’s totally unexplored, yet valid and legal.”

The only real issue as Riley sees it, is the matter of writing up and properly presenting this information to governments, police, and courts and properly articulating Section 35 rights. And when asked about the “cannabis moratorium” passed by Band Council, Riley answered, “I don’t think you need any moratorium on anything. You’ve been operating in the community with passive acceptance of the community. That’s traditional. Get up those [store] signs so you can explain all of this.”

In concluding his remarks Riley indicated that he would be willing to testify as an expert witness in any case where Indigenous people are prepared to assert their rights through Section 35 and the traditional way of doing business in the community.

At the end of the meeting moderator Frank Belleau thanked the people for coming out and stated in conclusion, “this is our right. Our ancestors fought for this, and never thought once about giving up our voice for the people. Everybody’s voice means something where we come from.” Belleau added that, “we can heal ourselves and we can heal each other through mother earth, mother nature…. Our families, our communities, our clans, are all coming together like they should. In honor of what our grandfathers and grandmothers left for us.”

A meeting of the Ketegaunseebee Medzin Society is being planned for Saturday, January 18th, 2020 and will serve as a place where the people of Garden River and the cannabis dispensaries in the community, can meet to discuss the self-regulation of the cannabis industry in their territory.

For more information about the meeting and the Ketegaunseebee Medzin Society, visit their Facebook Page.