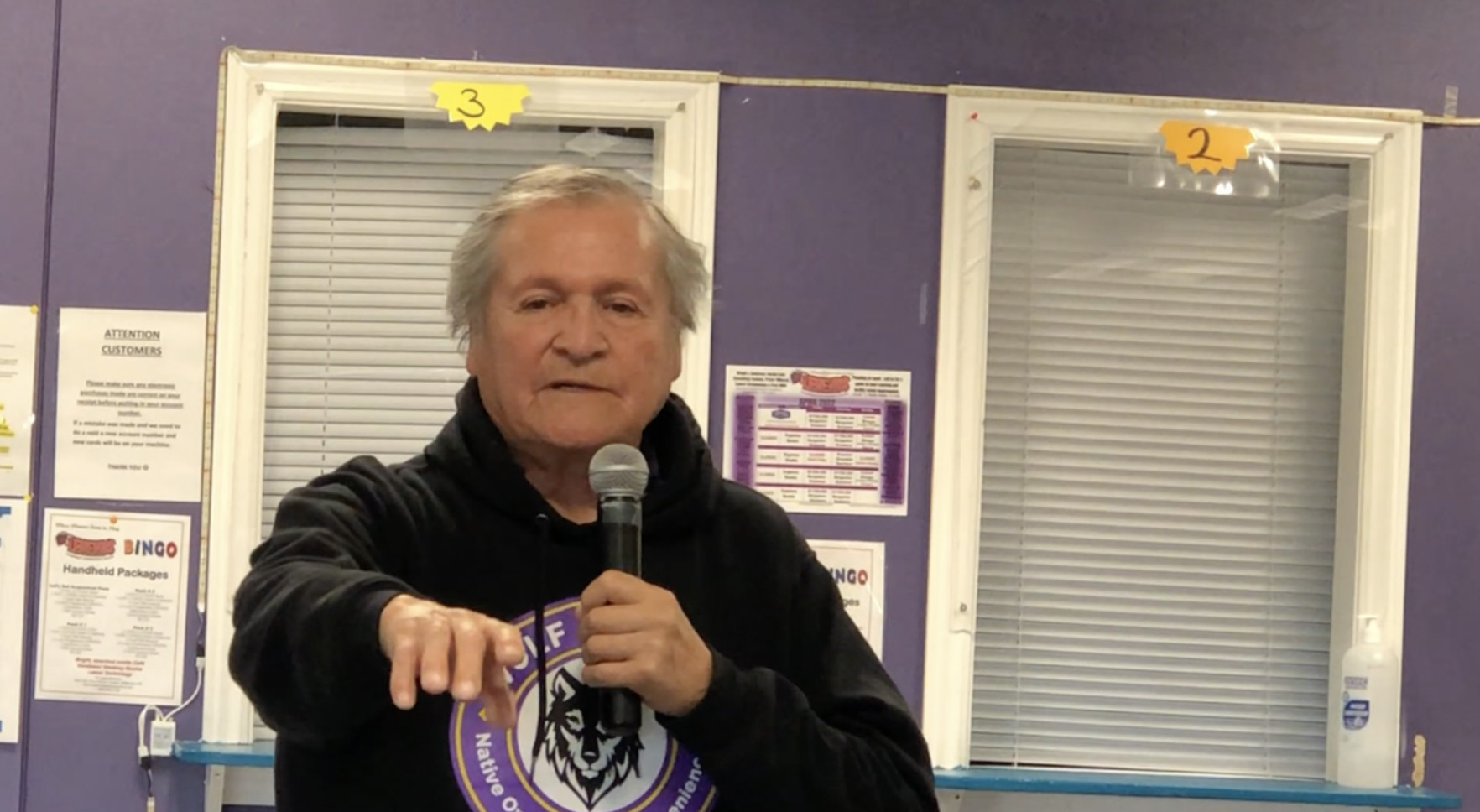 Over 80 community members came out to hear former National Chief Del Riley speak about cannabis as an Aboriginal Right.

MILLBROOK FIRST NATION – On Wednesday, April 6th, 2022, former National Chief Del Riley made a presentation on the topic of “Decolonization, Moderate Livelihood, and cannabis as an Aboriginal Right” to an enthusiastic crowd of over 80 people at the Legends Gaming Centre in Millbrook First Nation. Local cannabis entrepreneur and Millbrook First Nation councilor Chris Googoo organized the event with the Mi’kmaq Cannabis Association in order to discuss Aboriginal and Treaty rights as it affects the cannabis industry and possible options for the “regulation” of the Indigenous cannabis industry.

Over the last several years, Chief Riley has been traveling to Indigenous communities throughout Ontario to speak about the constitutionally protected Aboriginal and Treaty right to cannabis. Although there are now over 300 sovereign Indigenous cannabis dispensaries across Turtle Island, many – including some stores in Millbrook First Nation – have been raided by police. In some cases, including those in Aundeck Omni Kaning and Six Nations, the Crown has dropped the charges but not returned the products and money seized by police.

In other cases involving a number of dispensaries along the north shore of Lake Huron, Chippewa of the Thames First Nation, and Millbrook First Nation, dispensary owners have been raided and charged and are now raising constitutional challenges to their charges. If these constitutional challenges are successful, Provincial and Federal cannabis laws as they apply to Indigenous people would be overturned.

Chief Riley has a unique perspective on these issues. Not only has he enjoyed the use of cannabis since the 1960s, and used cannabis as a medicine to treat himself for serious illness, but he has spent his entire life fighting for Indigenous rights. In addition to his hereditary position as a Crane Clan chief of the Chippewa Nation, Chief Riley was also the last President of the National Indian Brotherhood, a founder of the Assembly of First Nations, a past President of the Union of Ontario Indians, and a past chairman of the World Council of Indigenous Peoples.

Among Chief Riley’s many contributions, he helped to author and negotiate Sections 25 and 35 of the Canadian Constitution as the President of the National Indian Brotherhood. These sections enshrined Aboriginal and Treaty Rights in the Canadian constitution and are a central defense in the three constitutional challenges currently in front of the courts.

In his presentation in Millbrook First Nation, Chief Riley spoke about his efforts to entrench Aboriginal Rights into the Canadian constitution. According to Chief Riley, the key was the National Indian Brotherhood’s move to open a treaty office in England to put international pressure on the Canadian government. Ultimately the deal to include Sections 25 and 35 in the constitution was made when Jean Chretien – the Minister responsible for constitutional negotiations – offered that they would be included if Chief Riley would close down his office in England. When Canada later tried to renege on the deal, Chief Riley called a national meeting and protest that was attended by 10,000 people on Parliament Hill. After this show of force, the protections to Aboriginal and Treaty Rights were added to the Canadian constitution.

The Indian Act and Indigenous Cannabis

In discussing the political situation facing Mi’kmaq people today, Chief Riley underlined the fact that no Mi’kmaq land or resources have ever been surrendered to the Crown. Only Peace and Friendship Treaties have been signed. Among them are the 1752 Peace and Friendship Treaty which explicitly states that Mi’kmaq people are entitled to “bring for Sale to Halifax or any other Settlement within this Province, Skins, feathers, fowl, fish or any other thing they shall have to sell, where they shall have liberty to dispose thereof to the best Advantage.”

As Chief Riley put it, “You’re actually in a hell of a good position here. The Royal Proclamation [of 1763] said the government had to buy the land from you. How much did they buy from you? Where is that receipt for what they bought from you? Bet you can’t find it.” Indeed, no such surrenders or sale of lands have taken place in Mi’kmaq territory.

Chief Riley explained that the BNA Act of 1867 which created the Dominion of Canada led to the setting up of the Indian Act, a racist law aimed at assimilating Indigenous people and undermining their Treaty and Aboriginal rights. Thanks to the Indian Act, Indigenous people were confined to reserves, their children were forcibly taken from their families and abused and even killed at residential “schools,” and traditional forms of governance were attacked. As Chief Riley noted, Canada established “a system to get easy access to your resources and to not have to pay you. Part of that regime was to introduce their Apartheid act, the racist Indian Act which is still in place today. This makes a joke of truth and reconciliation. Even in South Africa they got rid of the racist law there. Canada unfortunately kept it.”

The first versions of the Indian Act explicitly spelled out Canada’s plan to confer “certain privileges on the more advanced Bands of the Indians of Canada, with the view of training them for the exercise of municipal powers.” In order to do so, Canada bypassed the traditional system of Indigenous families representing themselves through clan chiefs and clan mothers, and established a band council system under the control of Indian Agents and government officials. As Chief Riley has pointed out in other speeches, The Band Council is not an “Indian,” signed no treaties, holds no rights, and owns no land – it is an administrative body created by Parliament, and it is responsible to the Minister of Indian Affairs, not the people who elected them.

The Canadian government’s position is that Band Councils do not have the authority or jurisdiction to make their own “sovereign” laws about cannabis. They can only “harmonize” their cannabis regulations with Federal and Provincial laws, not make their own free-standing system of regulations. In practical terms this has meant that Band Councils following this direction have designated Indigenous produced cannabis products as “illicit” and are only able to sell Health Canada approved and regulated products. Furthermore, the cannabis businesses operating in this way pay taxes (often called “community health and benefit fees”) to Band Council, which are then considered “own source revenues” by the Federal government.

As Chief Riley pointed out in his speech, the fundamental issue lies with colonial nature of the Indian Act Chief and Council system. But the solution is not to blame the Band Council officials. “Where they are is not their fault, and I don’t want anyone to blame them for the situation they’re in. The biggest problem is that John A. Macdonald didn’t want to give them any power, so he didn’t give them any authority…. Chief and Council has no authority. That doesn’t sound right does it? It doesn’t sound right not even to them. The problem is most of them have never read the Indian Act or had it explained to them what it really is. Not by a lawyer, but by someone who knows the social impacts of it.” Chief Riley ended his presentation by offering to come back to Millbrook First Nation to do a workshop aimed at educating young people in the community about the Indian Act.

A lively discussion was held following the presentations. Rhonda Martin, from Six Nations of the Grand River territory and the driver for Chief Riley’s trip, offered her thoughts on the experience of Six Nations, where the Indian Act band council has established it’s own cannabis law and raided numerous sovereign dispensaries. In Six Nations a group of sovereign minded cannabis dispensaries have united to form the Six Nations People’s Cannabis Coalition to self-regulate their industry and to push back against the Band Council’s efforts to tax the shops.

A meal was provided for all attendees at the event, and a series of door prizes were raffled off at the end of the night. The prizes included an iPad, audio speakers, and $500 in cash. As the raffle progressed, two band councillors donated another $300 from their own pockets to keep the raffle going. The response from community members was extremely positive, and many expressed their gratitude for Chief Riley’s presence. The video of the discussion session can be viewed below.

Chief Riley continues trip with visits to other Mi’kmaq communities

In the days following the event, Chief Riley visited dispensaries in two other Mi’kmaq communities – Whycocomagh and Eel River Bar First Nation. After meeting with the dispensary owners, Chief Riley presented them with a certificate he signed that was produced by the Mi’kmaq Cannabis Association indicating that the stores were protected by Sections 25 and 35 of the Canadian Constitution.

Altogether, Chief Riley and his team traveled over 4000kms to bring their message of Indigenous rights and freedoms. Chief Riley has already been invited back to all three communities to hold further speaking events to launch his forthcoming autobiography.

A full audio recording of the event can be accessed below.