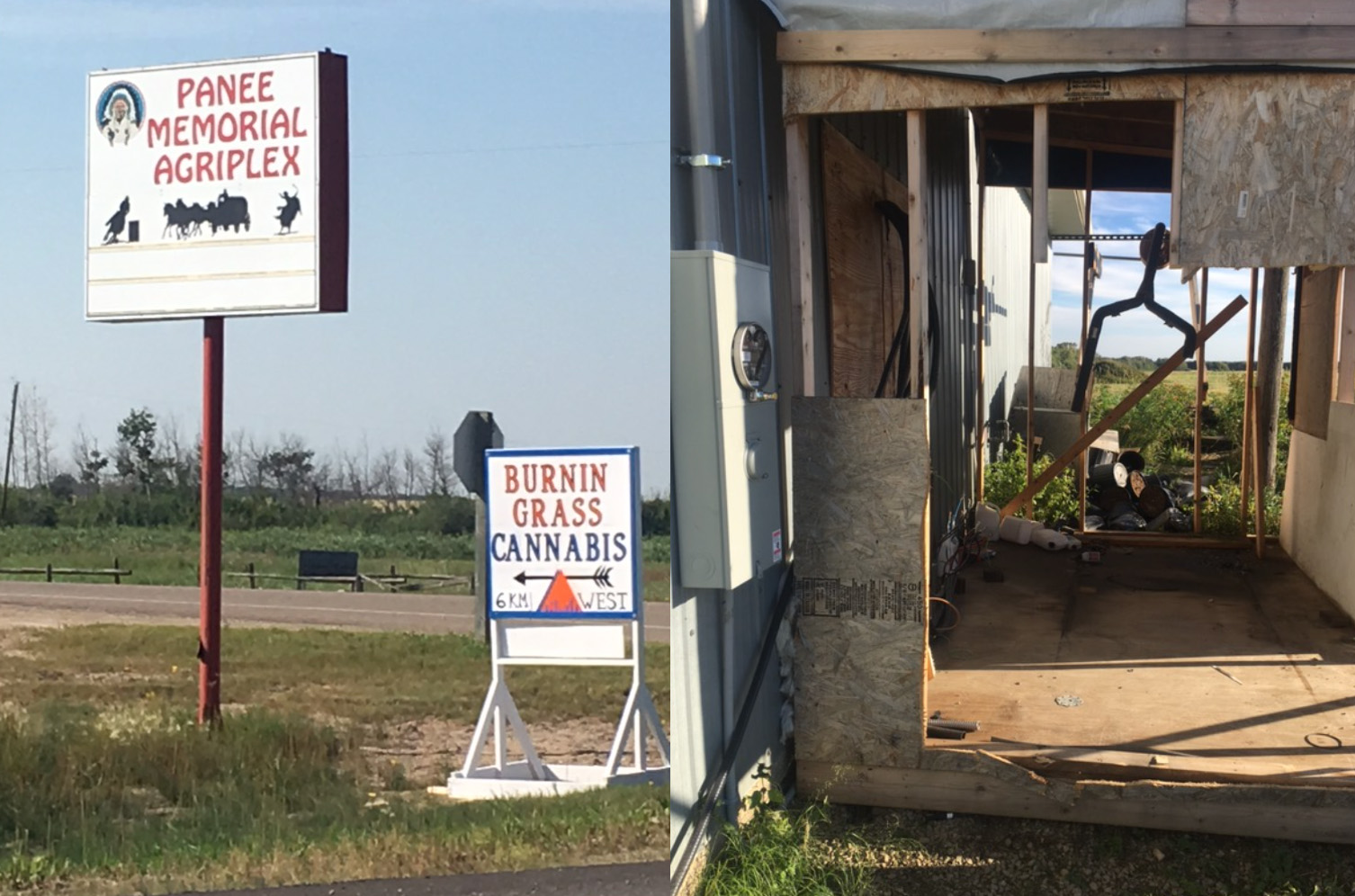 SAMSON FIRST NATION – Burnin Grass Dispensary, one of the only sovereign Indigenous cannabis shops operating openly in Alberta was raided by the RCMP on Thursday, Sept 1st, 2022. In violation of constitutionally protected treaty and Aboriginal rights, the RCMP came onto the reserve with automatic assault rifles at the ready as they sawed through the wall of the building. According to eye-witnesses, the RCMP kicked down doors even though they were provided with the keys by employees on site.

Burnin Grass has been providing medicine to community members for the past two years, and opened a storefront dispensary 6 months ago. The business model is based on growing cannabis on site in grow “pods” attached to the dispensary to ensure the safety and quality of the product sold. This ensures that no “black market” cannabis enters the distribution system, eliminates the need for t1ransport, and means more jobs and expertise based on reserve. Burnin Grass is a local economic success story in an area ravaged by opioid addiction and Indian Act enforced poverty. The business employs approximately 40 community members and enjoys widespread community support.

According to James Bull, a businessman involved with the project, the RCMP officers refused to engage or discuss the Treaty rights issues involved.  “It wasn’t right for them to shut our operation down. I told them, you guys are in the wrong, I’m sorry officer, but he wouldn’t give me a chance to explain where I was coming from.”

According to a worker at the facility, the RCMP had the power cut off to the property, and then cut a hole in the wall of the building, and took out the natural gas power generator for the facility which is valued at over $50,000. The police also seized over $100,000 worth of grow lights, along with cannabis, gummies, and paperwork from the dispensary. Most significantly, the RCMP took 21 “mother plants” who provided exclusive cannabis genetic strains that were the basis for the business along with 1000 other plants cloned from these mothers. The reason that many medical patients traveled long distances to purchase their medicine from Burnin Grass is because these strains provided exceptional relief for their ailments.

Chief Bull: Raid a Violation of Treaty and Aboriginal Rights

According to Chief Desmond Bull of the nearby Louis Bull Tribe, the use of cannabis as a natural medicine enjoys wide support in the Samson First Nation community and the store is providing medicine that has helped many people heal from different injuries.

Concerning the RCMP raid, Chief Bull said “I believe that the police overstepped their boundaries in regards to this raid. Under the treaty agreements and the understanding of who we are as First Nations, selling cannabis is not illegal. What Burnin Grass was doing was creating a business, creating entrepreneurship and building an industry that was already in place.” Raising concerns about the RCMP attempting to control First Nations, Chief Bull also raised concerns with racial profiling by the RCMP and suggested that the cops had more pressing issues they should be dealing with.

“As the RCMP are a federal-run program, they should acknowledge the fact that the precedents have been set for Indigenous cannabis and they shouldn’t be interfering in any way. If anything, what they did was illegal and they could face lawsuits, I believe” Chief Bull added.

The precedent to which Chief Bull is referring are the hundreds of Indigenous cannabis dispensaries that are operating with the support of their people right across Canada. Although the RCMP has raided some of these dispensaries, the trend – as in a recent raid RCMP raid in Mi’kmaq territory in Eskasoni, Nova Scotia or in a OPP raid on Chippewas of the Thames Territory in Ontario, has been to drop the charges before they can be heard in court. The problem however, is that the property seized by police is most often not returned.

According to Chief Bull, “At the end of the day, we are nations, and we are in a nation-to-nation agreement under the treaty where we are our own country.  We have our own sovereignty to do the work we need to do as long as it is not illegal. And this was not illegal. For me the raid was a tactic for controlling an industry that has been taken over by corporations.”

In addition to violating Sections 25 and 35 of the Canadian Constitution which protect Aboriginal and Treaty Rights, the RCMP raid and seizure was in violation of Section 89.1 of the Indian Act which states that “Subject to this Act, the real and personal property of an Indian or a band situated on a reserve is not subject to charge, pledge, mortgage, attachment, levy, seizure, distress or execution in favour or at the instance of any person other than an Indian or a band.”

The search warrant for the raid was requested by RCMP officer Kimberly Hoffmeyer and was authorized by Justice Renee Cochard on August 22nd, 2022. Corporal Hrdlicka, Media Relations for RCMP K Division was asked for comment on the issue, but was not able to find a file or call for service in the matter, and was thus unable to comment. No charges have yet been laid by the RCMP in the matter.

An online petition has been created for supporters of the Burnin Grass Dispensary to sign. The petition can be accessed at the following link. https://forms.gle/HBVibthEHqu7Ru7T8