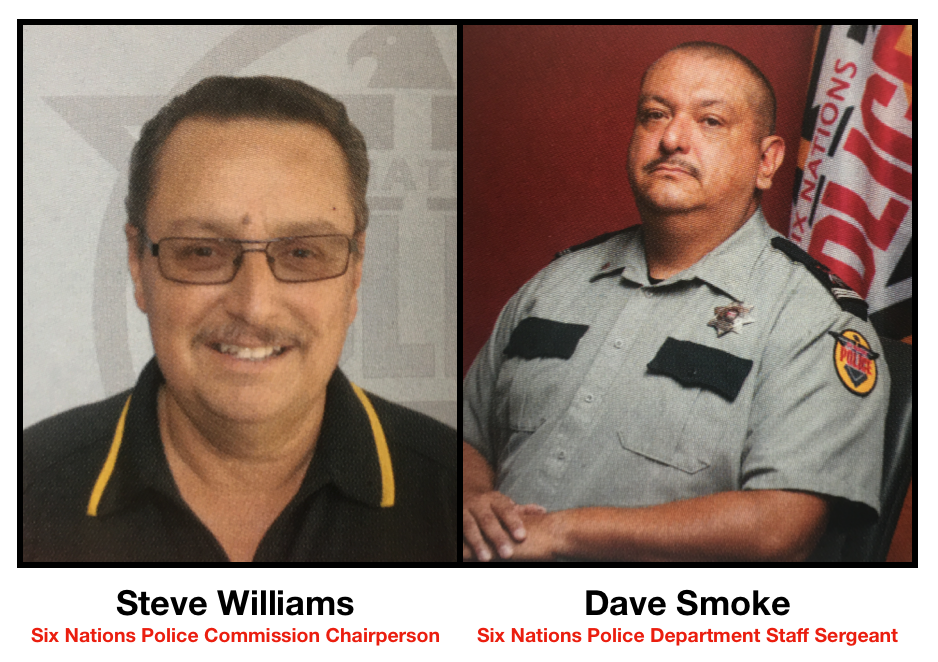 We spoke on the phone first with SNPD Staff Sergeant Dave Smoke. Smoke has served on the force since 1992 in a variety of positions including Patrol Constable, Community Services Officer, Detective Constable, Patrol Sergeant, Media Relations Officer, and A/S/Sgt in charge of Operations.

We followed up with Steve Williams, a former Six Nations elected Chief who now sits as both the Chair of the Six Nations Police Commission, and the President of Grand River Enterprises International, the largest First Nations’ owned private business in the world.

Both Sergeant Smoke and Chair Williams explained the autonomy of the SNPD, stressing their full independence from Ontario and Canadian police forces. As Smoke put it, “we’re not part of the OPP, we are our own stand alone First Nations Police Service. What that means is that we have our own Police Commission that we operate under, that looks after us, and we operate as our own Police Service ourself.”

Smoke added, that while the SNPD does cooperate with other Police Services and Federal agencies, “we are our own autonomous First Nations stand alone Police Service, the OPP has no influence or directive towards us.”

Williams explained that Six Nations’ “stand alone commission” provides independent governance for the SNPD. When vacancies occur, they are advertised and new members are added at the discretion of the existing commission members. The Six Nations Elected Council approves board members once a year and also has a representative on the commission.

The funding for the SNPD comes from both the federal and provincial governments, but that doesn’t mean that the SNPD enforces all Canadian laws equally – or at all. According to Williams:

“Six Nations and all First Nations in Ontario are unique because the province of Ontario doesn’t have authority over any of the Federal lands where the First Nations are. Secondly, it’s up to the community what they want us to police.”

The issue of “contraband” Tobacco

According to Williams, this issue of not enforcing Canadian laws comes down to Six Nations having a “sovereign right” and special relationship with the Crown.

Speaking of tobacco enforcement, Williams noted “You call it ‘contraband,’ we don’t. That’s just the government position to say everything is illegal. Well that’s not true. For us it’s our own sovereign right to do what we want to do. If we want to make any kind of business, that’s our business.”

Williams continued. “Government shouldn’t be telling us what to do. We have an agreement with the Queen, with the King, when we first got here and it says neither one will bother each other. We don’t bother the government, and they don’t bother us. We do what we want to do…. Right now, we don’t feel that we have any counterfeit or contraband tobacco on the reserve. If people want to make cigarettes or distribute cigarettes, as long as they’re selling to their own people, there should be no issue.” The differences between cannabis and tobacco laws

Once SNPD comes to know the wishes of the people of Six Nations regarding which Canadian laws they want enforced, and which ones they consider a violation of their sovereignty, they are obliged to enforce those wishes, both policemen confirmed. Both Smoke and Williams said the direction that they take comes exclusively from the Six Nations community.

When it comes to cannabis, both Williams and Smoke believe that the Six Nations community has spoken out loud and clear.

“Our community has been very outspoken, with saying we do not want any type of drugs or mind-changing substances like cannabis on the territory,” says Smoke. “Our community has made it very clear that they don’t want anything to do with cannabis on the territory…. So that’s where we’re taking our ideas from, is that the community doesn’t want illegal or illicit drugs here, and that’s our mandate for enforcing it.”

For his part, Williams placed the community’s view on cannabis squarely in the frame of the Canadian government’s plan to make Bill C-45 the law by July 1st.

“Right now the position of the Six Nations Council, and the Police Commission and the Police Services, and I don’t know about the Confederacy because they never came to a position, but our position has always been zero drugs.”

For now, both Smoke and Williams explain that the SNPD mandate is to enforce Ontario and Canadian laws on cannabis. When asked what would need to happen to stop the police raids on medicinal cannabis dispensaries, Smoke was clear. “It would have to become clear to the Police Service that this is what the community wants.”

“The community made it clear to the police and we felt that that was what the message was, that they did not support any kind of cannabis activity on the territory and that’s where we’re taking our enforcement and mandate from to continue to enforce against these illegal dispensaries. Now if the tide changes, and cannabis becomes legal within the country and the Province, that may change things. I can’t speak for that right now. Until it becomes legal, unfortunately it is illegal, and we will have to keep enforcing, raiding these dispensaries.”

Ultimately, the issue is what kind of cannabis regulatory system is appropriate for Six Nations.

“I think our Police Service would adopt whatever the Canadian regulations are across the Province, across the country rather, as far as enforcement for cannabis. Because we couldn’t just let these dispensaries pop up, we have to make sure they are regulated,” Smoke added.

“I think that’s the position Band Council may be looking at, but I can’t speak for them. If it does become legal there may be some changes made, but until then unfortunately cannabis is illegal, and that is the position we are taking,” he said.

When asked how it would be possible to change the minds of the police as to the position of the community on cannabis, Williams indicated that the Band Council could organize public meetings on the matter.

According to Williams, “At this point we haven’t had any public meetings for that. Every time we have a public meeting, nobody shows up. The interest ain’t there. Once it comes in July that’s probably when we’re going to get all these people screaming at us, ‘like what are you doing about this?’ Right now, a few weeks ago, the community said that they want zero tolerance on drugs.“

William’s account doesn’t include the multiple public community meetings on cannabis that have happened since last October. For two of these meetings, where Six Nations people have attempted to gather at Six Nations meeting halls to discuss cannabis regulation, medicinal use and sovereignty, their bookings were cancelled and the people were locked out of their own community buildings by the Six Nations Elected Council. Either way, whether in the parking lot outside the Community Hall or in Yogi’s barn, those meetings went ahead – and expressed a strongly pro-cannabis feeling.

While they say the SNPD is awaiting the will of the people on self-regulation, Smoke and Williams had no comment on these meetings or SNEC actions, saying instead that comment should be sought from SNEC.

Pressed as to basis for the community consensus on drugs that SNPD has been responding to, Police Commission Chief Williams indicated that he was speaking about a March 2018 incident with Brett Elliott, an alleged “drug dealer in the community. It took two weeks to arrest that gentlemen, and at that time they [the community] were saying “zero tolerance”.

When asked directly if he drew a distinction between Brett Elliott’s alleged ‘drug house’ and the openly operating cannabis dispensaries like Bear Medicine, Green Health and King Leaf, Williams answered “No.” He added, “It’s not up to the commission to tell the police who to raid or who not to raid. That’s the police’s decision to do that. For us, our position is zero tolerance on drugs. I don’t know what will happen in July. At that point, I guess we’ll figure it out.”

Pressed further to clarify if he sees a difference between “crack or cocaine or whatever and cannabis,” Williams answered, “I just call drugs, drugs.”

On cannabis he said,“at this point yes. It still is a drug. But if the community comes back and says we are okay with cannabis, than so be it. They told us they were okay with tobacco, so be it.” When asked what word other than “drug” he would use to describe cannabis once it became legal, Williams was unsure.

Neither Smoke or Williams wished to make comment on the issue that the criminal charges being placed upon people arrested for operating “illegal” cannabis dispensaries, might bar them from “legitimate” participation in the same industry once it is legalized in a few months time.

Nearly a dozen Six Nations people have been arrested in the last year, many at gun point, and the resulting loss of freedom of movement, social stigma, trauma and more sit in stark contrast to the medical benefits they were dispensing to customers and community.

Staff Sergeant Smoke declined to explain why the SNPD carried out its raids using automatic rifles to detain dispensary workers at gunpoint, saying that he couldn’t comment on specific police tactics or procedures, adding that “every search warrant has the potential for violence.”

As a final note, Smoke confirmed that the SNPD does not drug test its officers.

If you have comments on this story and wish to be quoted in our followup article, please leave your comment below, or email magazinesmokesignals@gmail.com and we’ll get in touch.