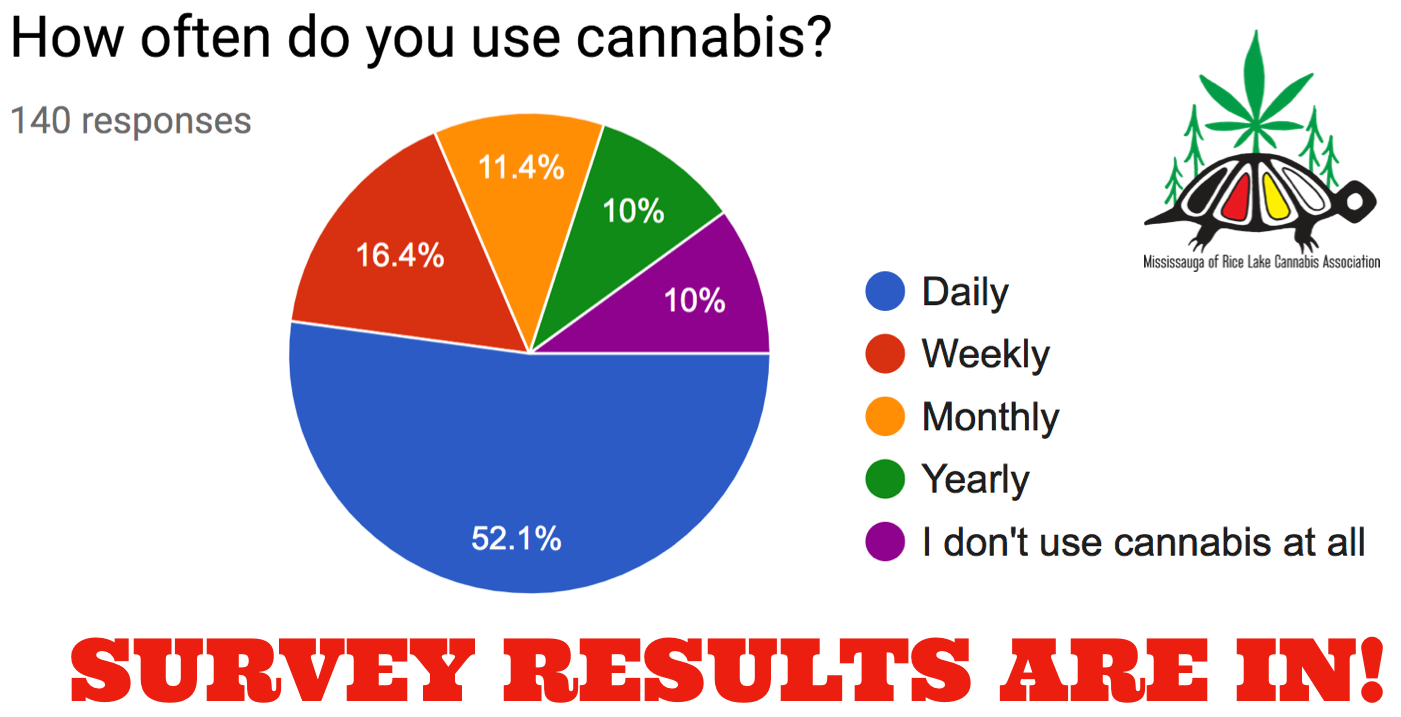 The results of the Alderville Cannabis Survey are now in. The survey, which was run by the Mississauga of Rice Lake Cannabis Association, asked Alderville First Nations members their views on the cannabis plant and its regulation in their community. 142 people filled out the survey over the one-month period from the Sept 15th meeting of the Association, to its Oct 15th closing date. The survey was made available through a mail-out to all homes on the reserve, shared on social media, and could be filled out online.

The results of the survey were a strong endorsement of Alderville’s cannabis industry. 91.5% of respondents stated that they consider cannabis a medicine, and 92.9% said that they believe that the people of Alderville have a “sovereign right” to make their own rules “to determine their own path and choices” regarding the plant.

These very high numbers were comparable to the numbers returned by the Six Nations Cannabis Survey undertaken by the Green Health for 6 dispensary in Six Nations in December of 2017. Six Nations is the largest reserve by population in Canada, and there the 731 respondents declared by 95.1% that cannabis was a medicine and by 96.5% that Six Nations had a sovereign right to establish and run its own cannabis industry.

On the question of whether cannabis is a medicine compatible with Indigenous medicine, 13.4% of respondents said they were unsure. But that still left a resounding majority of 80.2% who said they considered cannabis compatible with indigenous medicine. Survey respondents were very familiar with cannabis, with 92.2% indicating that they had tried cannabis at one point or another in their lives.

Respondents selected many different reasons for their use of cannabis. The top four reasons for using cannabis medicinally were for pain relief (71.8%), stress (67.7%), and insomnia (50%) and depression (47.6%).

In terms of their self-identification, survey respondents selected a variety of options. The most popular was Ojibway/Anishinaabe/Mississauga at 56.3%, Canadian citizen at 54.2%, and Status Indian at 48.6% of respondents. The average age of respondents was 37 years old.

Women were over-represented in the survey, with 59.2% of respondents identifying as female, and 40.8% as male.

“We gave everyone a chance to be heard,” said Stevenson. “And we succeeded in getting about half of the on-reserve members to fill out the survey, so this is a big success.” Band membership was confirmed by collecting status numbers, information that is being kept under lock and key and which will be destroyed at the conclusion of the survey. The Association executive has decided to keep the survey open until December 15th, 2018 the date of its next quarterly meeting, so as to give Alderville members – especially those living off reserve – a further opportunity to make their voices heard about cannabis in Alderville.

Alderville First Nation members who have not yet filled out the survey can do so at the following link December 15th.