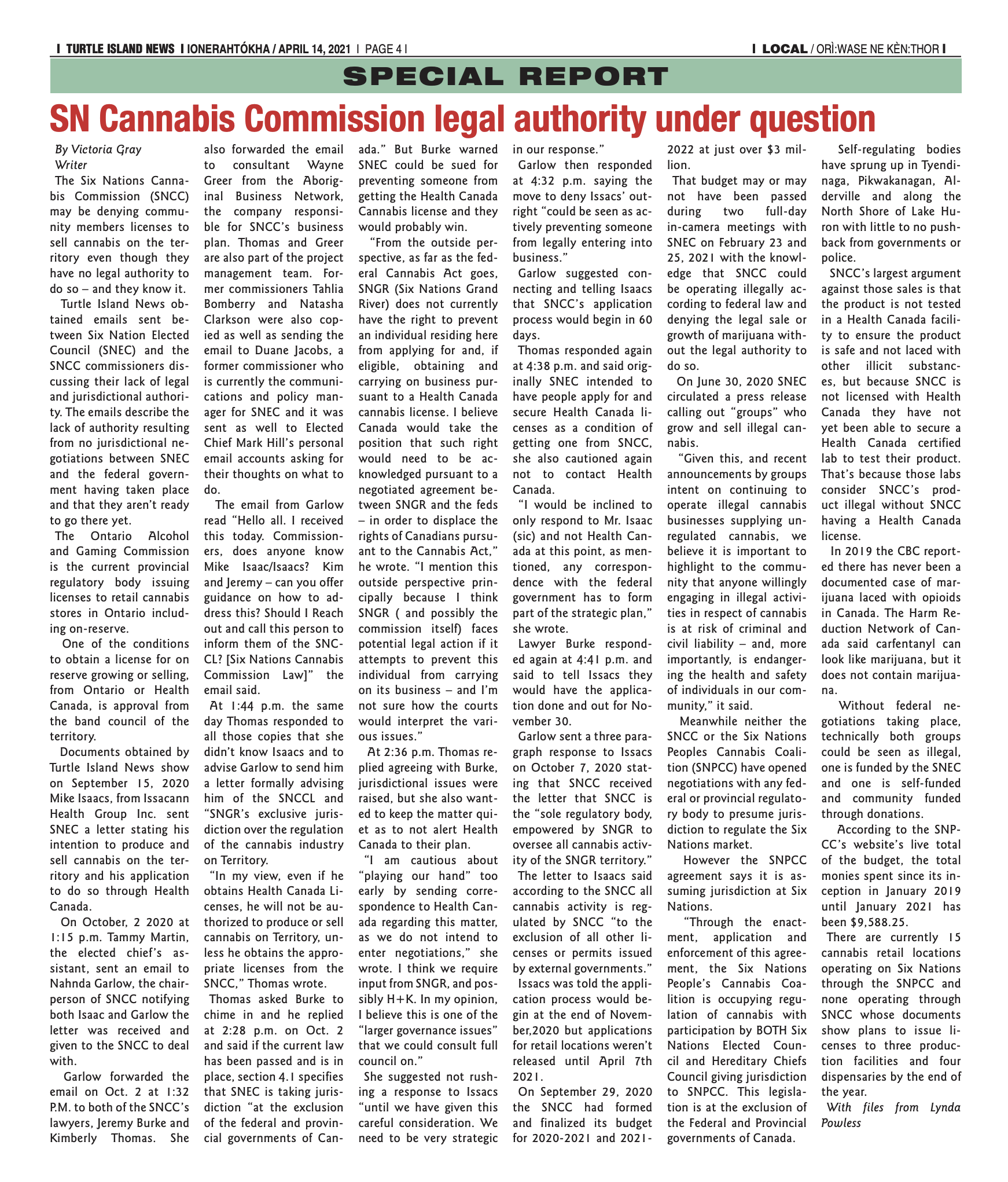 The Six Nations Cannabis Commission (SNCC) may be denying community members licenses to sell cannabis on the territory even though they have no legal authority to do so – and they know it.

Turtle Island News obtained emails sent between Six Nation Elected Council (SNEC) and the
SNCC commissioners discussing their lack of legal and jurisdictional authority. The emails describe the
lack of authority resulting from no jurisdictional negotiations between SNEC and the federal government having taken place and that they aren’t ready to go there yet.

The Ontario Alcohol and Gaming Commission is the current provincial regulatory body issuing licenses to retail cannabis stores in Ontario including on-reserve. One of the conditions to obtain a license for on reserve growing or selling, from Ontario or Health Canada, is approval from the band council of the territory.

Documents obtained by Turtle Island News show on September 15, 2020 Mike Isaacs, from Issacann Health Group Inc. sent SNEC a letter stating his intention to produce and sell cannabis on the territory and his application to do so through Health Canada. On October, 2 2020 at 1:15 p.m. Tammy Martin, the elected chief’s assistant, sent an email to Nahnda Garlow, the chairperson of SNCC notifying
both Isaac and Garlow the letter was received and
given to the SNCC to deal with.

Garlow forwarded the email on Oct. 2 at 1:32 P.M. to both of the SNCC’s lawyers, Jeremy Burke and Kimberly Thomas. She also forwarded the email to consultant Wayne Greer from the Aboriginal Business Network, the company responsible for SNCC’s business plan. Thomas and Greer are also part of the project management team. Former commissioners Tahlia Bomberry and Natasha Clarkson were also copied as well as sending the email to Duane Jacobs, a former commissioner who is currently the communications and policy manager for SNEC and it was sent as well to Elected Chief Mark Hill’s personal email accounts asking for their thoughts on what to do.

The email from Garlow read “Hello all. I received this today. Commissioners, does anyone know Mike Isaac/Isaacs? Kim and Jeremy – can you offer guidance on how to address this? Should I Reach out and call this person to inform them of the SNCCL? [Six Nations Cannabis Commission Law]” the email said.

At 1:44 p.m. the same day Thomas responded to all those copies that she didn’t know Isaacs and to advise Garlow to send him a letter formally advising him of the SNCCL and “SNGR’s exclusive jurisdiction over the regulation of the cannabis industry on Territory. “In my view, even if he obtains Health Canada Licenses, he will not be authorized to produce or sell cannabis on Territory, unless he obtains the appropriate licenses from the SNCC,” Thomas wrote.

Thomas asked Burke to chime in and he replied at 2:28 p.m. on Oct. 2 and said if the current law has been passed and is in place, section 4.1 specifies that SNEC is taking jurisdiction “at the exclusion of the federal and provincial governments of Canada.” But Burke warned SNEC could be sued for preventing someone from getting the Health Canada Cannabis license and they would probably win. “From the outside perspective, as far as the federal Cannabis Act goes, SNGR (Six Nations Grand River) does not currently have the right to prevent an individual residing here from applying for and, if eligible, obtaining and carrying on business pursuant to a Health Canada cannabis license. I believe Canada would take the position that such right would need to be acknowledged pursuant to a negotiated agreement between SNGR and the feds – in order to displace the rights of Canadians pursuant to the Cannabis Act,” he wrote. “I mention this outside perspective principally because I think SNGR ( and possibly the commission itself) faces potential legal action if it attempts to prevent this individual from carrying on its business – and I’m not sure how the courts would interpret the various issues.”

At 2:36 p.m. Thomas replied agreeing with Burke, jurisdictional issues were raised, but she also wanted to keep the matter quiet as to not alert Health Canada to their plan. “I am cautious about “playing our hand” too early by sending correspondence to Health Canada regarding this matter, as we do not intend to enter negotiations,” she wrote. I think we require input from SNGR, and possibly H+K. In my opinion, I believe this is one of the “larger governance issues” that we could consult full council on.” She suggested not rushing a response to Issacs “until we have given this careful consideration. We need to be very strategic in our response.”

Garlow then responded at 4:32 p.m. saying the move to deny Issacs’ outright “could be seen as actively preventing someone from legally entering into business.” Garlow suggested connecting and telling Isaacs that SNCC’s application process would begin in 60 days. Thomas responded again at 4:38 p.m. and said originally SNEC intended to have people apply for and secure Health Canada licenses as a condition of getting one from SNCC, she also cautioned again not to contact Health Canada. “I would be inclined to only respond to Mr. Isaac (sic) and not Health Canada at this point, as mentioned, any correspondence with the federal government has to form part of the strategic plan,” she wrote.

Lawyer Burke responded again at 4:41 p.m. and said to tell Issacs they would have the application done and out for November 30. Garlow sent a three paragraph response to Issacs on October 7, 2020 stating that SNCC received the letter that SNCC is the “sole regulatory body, empowered by SNGR to oversee all cannabis activity of the SNGR territory.” The letter to Isaacs said according to the SNCC all cannabis activity is regulated by SNCC “to the exclusion of all other licenses or permits issued by external governments.”

Issacs was told the application process would begin at the end of November, 2020 but applications for retail locations weren’t released until April 7th 2021. On September 29, 2020 the SNCC had formed and finalized its budget for 2020-2021 and 2021- 2022 at just over $3 million. That budget may or may not have been passed during two full-day in-camera meetings with SNEC on February 23 and 25, 2021 with the knowledge that SNCC could be operating illegally according to federal law and denying the legal sale or growth of marijuana without the legal authority to do so.

On June 30, 2020 SNEC circulated a press release calling out “groups” who grow and sell illegal cannabis. “Given this, and recent announcements by groups intent on continuing to operate illegal cannabis businesses supplying unregulated cannabis, we believe it is important to highlight to the community that anyone willingly engaging in illegal activities in respect of cannabis is at risk of criminal and civil liability – and, more importantly, is endangering the health and safety of individuals in our community,” it said.

This legislation is at the exclusion of the Federal and Provincial governments of Canada. Self-regulating bodies have sprung up in Tyendinaga, Pikwakanagan, Alderville and along the North Shore of Lake Huron with little to no pushback from governments or police. SNCC’s largest argument against those sales is that the product is not tested in a Health Canada facility to ensure the product is safe and not laced with other illicit substances, but because SNCC is not licensed with Health Canada they have not yet been able to secure a Health Canada certified lab to test their product.

That’s because those labs consider SNCC’s product illegal without SNCC having a Health Canada license. In 2019 the CBC reported there has never been a documented case of marijuana laced with opioids in Canada. The Harm Reduction Network of Canada said carfentanyl can look like marijuana, but it does not contain marijuana. Without federal negotiations taking place, technically both groups could be seen as illegal, one is funded by the SNEC and one is self-funded and community funded through donations. According to the SNPCC’s website’s live total of the budget, the total monies spent since its inception in January 2019 until January 2021 has been $9,588.25.

There are currently 15 cannabis retail locations operating on Six Nations through the SNPCC and none operating through SNCC whose documents show plans to issue licenses to three production facilities and four dispensaries by the end of the year.

With files from Lynda Powless