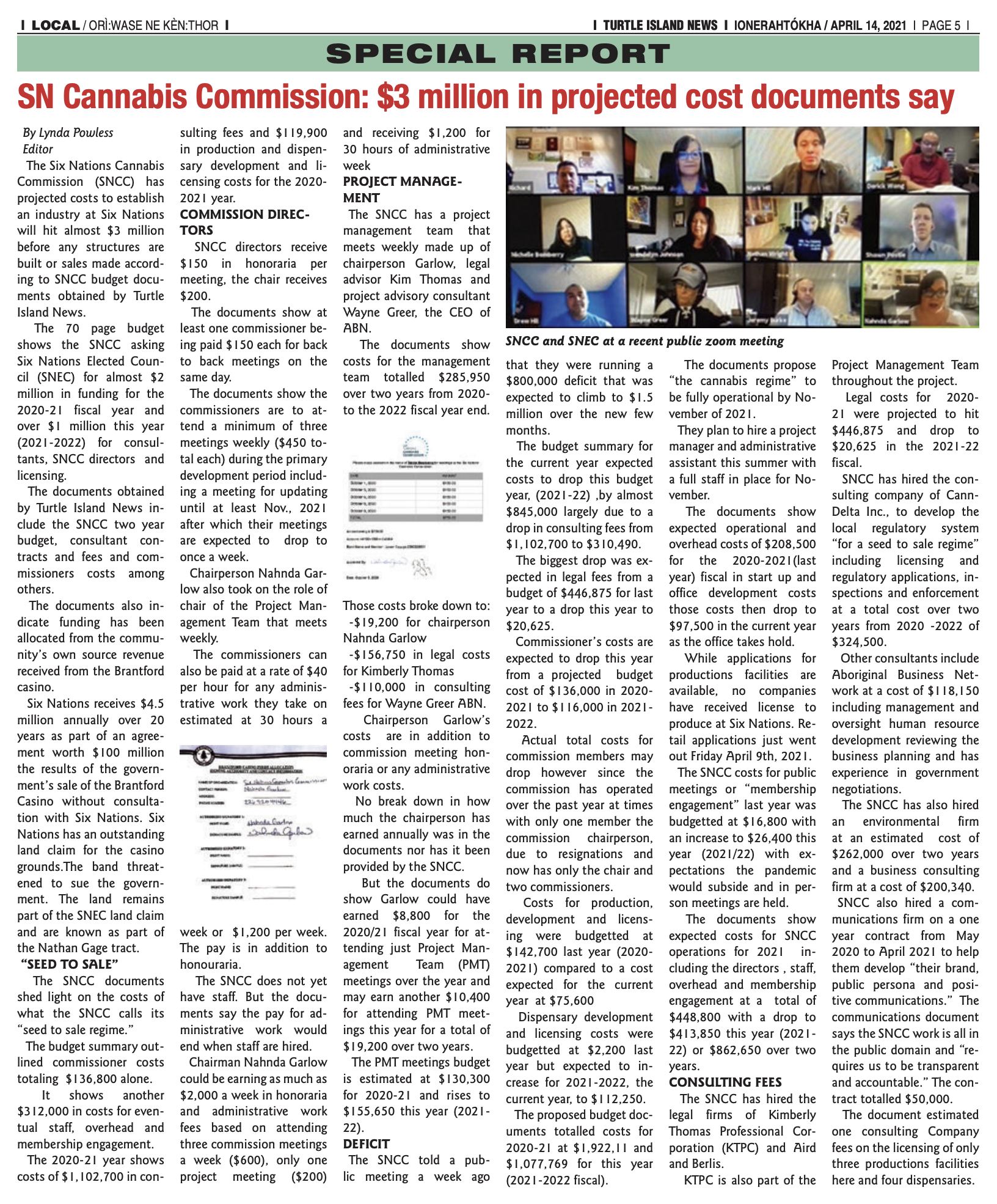 The Six Nations Cannabis Commission (SNCC) has projected costs to establish an industry at Six Nations will hit almost $3 million before any structures are built or sales made according to SNCC budget documents obtained by Turtle Island News.

The 70 page budget shows the SNCC asking Six Nations Elected Council (SNEC) for almost $2 million in funding for the 2020-21 fiscal year and over $1 million this year (2021-2022) for consultants, SNCC directors and licensing.

The documents obtained by Turtle Island News include the SNCC two year budget, consultant contracts and fees and commissioners costs among others. The documents also indicate funding has been allocated from the community’s own source revenue received from the Brantford casino. Six Nations receives $4.5 million annually over 20 years as part of an agreement worth $100 million the results of the government’s sale of the Brantford Casino without consultation with Six Nations.

Six Nations has an outstanding land claim for the casino grounds.The band threatened to sue the government. The land remains part of the SNEC land claim and are known as part of the Nathan Gage tract. “SEED TO SALE” The SNCC documents shed light on the costs of what the SNCC calls its “seed to sale regime.”

SNCC directors receive $150 in honoraria per meeting, the chair receives $200. The documents show at least one commissioner being paid $150 each for back to back meetings on the same day. The documents show the commissioners are to attend a minimum of three meetings weekly ($450 total each) during the primary development period including a meeting for updating until at least Nov., 2021 after which their meetings are expected to drop to once a week. Chairperson Nahnda Garlow also took on the role of chair of the Project Management Team that meets weekly.

The commissioners can also be paid at a rate of $40 per hour for any administrative work they take on estimated at 30 hours a week or $1,200 per week. The pay is in addition to honouraria. The SNCC does not yet have staff. But the documents say the pay for administrative work would end when staff are hired. Chairman Nahnda Garlow could be earning as much as $2,000 a week in honoraria and administrative work fees based on attending three commission meetings a week ($600), only one project meeting ($200) and receiving $1,200 for 30 hours of administrative work.

The SNCC has a project management team that meets weekly made up of chairperson Garlow, legal advisor Kim Thomas and project advisory consultant Wayne Greer, the CEO of ABN. The documents show costs for the management team totalled $285,950 over two years from 2020- to the 2022 fiscal year end. Those costs broke down to: -$19,200 for chairperson Nahnda Garlow -$156,750 in legal costs for Kimberly Thomas -$110,000 in consulting fees for Wayne Greer ABN.

Chairperson Garlow’s costs are in addition to commission meeting honoraria or any administrative work costs. No break down in how much the chairperson has earned annually was in the documents nor has it been provided by the SNCC. But the documents do show Garlow could have earned $8,800 for the 2020/21 fiscal year for attending just Project Management Team (PMT) meetings over the year and may earn another $10,400 for attending PMT meetings this year for a total of $19,200 over two years.

Actual total costs for commission members may drop however since the commission has operated over the past year at times with only one member the commission chairperson, due to resignations and now has only the chair and two commissioners. Costs for production, development and licensing were budgetted at $142,700 last year (2020- 2021) compared to a cost expected for the current year at $75,600 Dispensary development and licensing costs were budgetted at $2,200 last year but expected to increase for 2021-2022, the current year, to $112,250.

The proposed budget documents totalled costs for 2020-21 at $1,922,11 and $1,077,769 for this year (2021-2022 fiscal). The documents propose “the cannabis regime” to be fully operational by November of 2021. They plan to hire a project manager and administrative assistant this summer with a full staff in place for November.

The documents show expected operational and overhead costs of $208,500 for the 2020-2021(last year) fiscal in start up and office development costs those costs then drop to $97,500 in the current year as the office takes hold. While applications for productions facilities are available, no companies have received license to produce at Six Nations. Retail applications just went out Friday April 9th, 2021. The SNCC costs for public meetings or “membership engagement” last year was budgetted at $16,800 with an increase to $26,400 this year (2021/22) with expectations the pandemic would subside and in person meetings are held.

The SNCC has hired the legal firms of Kimberly Thomas Professional Corporation (KTPC) and Aird and Berlis. KTPC is also part of the Project Management Team throughout the project. Legal costs for 2020- 21 were projected to hit $446,875 and drop to $20,625 in the 2021-22 fiscal. SNCC has hired the consulting company of CannDelta Inc., to develop the local regulatory system “for a seed to sale regime” including licensing and regulatory applications, inspections and enforcement at a total cost over two years from 2020 -2022 of $324,500.

Other consultants include Aboriginal Business Network at a cost of $118,150 including management and oversight human resource development reviewing the business planning and has experience in government negotiations. The SNCC has also hired an environmental firm at an estimated cost of $262,000 over two years and a business consulting firm at a cost of $200,340. SNCC also hired a communications firm on a one year contract from May 2020 to April 2021 to help them develop “their brand, public persona and positive communications.”

The communications document says the SNCC work is all in the public domain and “requires us to be transparent and accountable.” The contract totalled $50,000. The document estimated one consulting Company fees on the licensing of only three productions facilities here and four dispensaries.