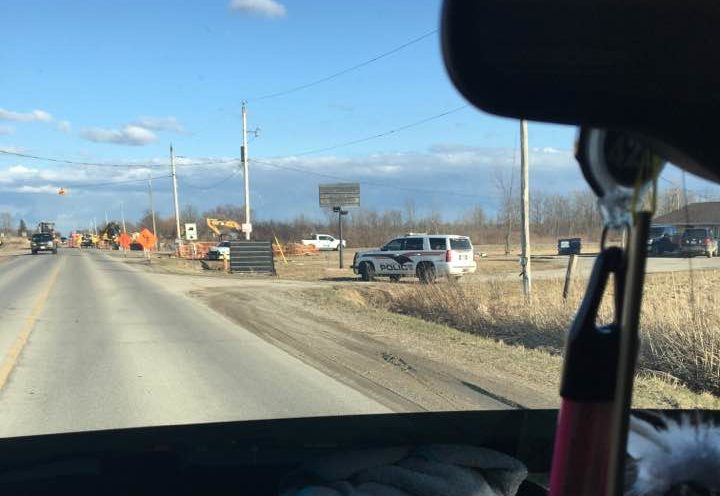 SIX NATIONS – Six Nations Police doubled down in their attempts to shut down Onkwehon:we run medicinal cannabis dispensaries on the territory this week, carrying out two consecutive raids on the Onkwehon:we owned store King Leaf. King Leaf is located at 2792 Fourth Line (at Onondaga Rd) and sells Onkwehon:we produce and manufactures including tobacco and cannabis.

The first raid was carried out at 5pm on Thursday, April 5th and saw three adults charged. Two of the men are Mohawk members of the Bear Clan, the other man is Cayuga and belongs to the Wolf Clan. All three men are Longhouse people trying to provide for their families by participating in the cannabis industry on their own land. The men were arrested and charged with “Trafficking and Possession of Cannabis” and later released on their own recognizance. The Six Nations Police took cash, cannabis flower, concentrates and edibles, valued by store managers at $15,000.

According to JR Hill, a manager at King Leaf, the second police raid was carried out at 9:50pm on Friday night, just before closing time. According to witnesses, this raid was conducted without a warrant, and led to the arrests of another Mohawk Bear Clan member. Four police cars were on the scene, and according to store managers, this time the police took cannabis flower valued at $5,000 but left money in the till and cannabis concentrates – including shatter and moonrocks – on the shelves. After arresting another member of the Mohawk Bear Clan who was in the store, the police officers left the store property with the door unlocked, and cannabis product remaining on the shelf.

In both raids, Six Nations police did not take “contraband” Onkwehon:we made tobacco products that, like “illicit” cannabis are also “illegal” according to the Canadian laws SNPD was enforcing. The raids at King Leaf were preceded by raids against Mohawk Medicine and Green Health for 6 in November of 2017 and January of 2018 respectively.

All charges in the Six Nations police July 2017 raid of Medixinal dispensary, were dropped in March of 2018 after the Crown was unable or unwilling to provide the defendants with disclosure 18 months after the arrests were made. In that case the defendants did not regain the money or product taken by police.

The management of King Leaf has vowed to remain open despite what they view as “straight up theft” from the Six Nations Police Department.

“It’s just like tobacco back in the day,” said manager JR Hill. “The cops are trying to rob us of our inherent right. Half of the people down here are all employed in tobacco. We had to fight for our right to build a tobacco economy. All those tobacco millionaires did time in jail back in the day for ‘contraband.’ What’s going on right now is no different.”

Hill further questioned the actions of the police in carrying out raids back to back. “Selling medicinal cannabis on our lands is our inherent right. How can they do raids back to back, leave product, leave money? I’ve sold cannabis half my life and there’s no way this is right. They didn’t leave no paperwork or nothing.”

There are currently at least four openly operating medicinal cannabis dispensaries at Six Nations. The Six Nations Medical Cannabis survey was carried out in December of 2017 and indicated that the people of Six Nations strongly support having their own medicinal and recreational cannabis dispensaries on their territory. In that survey, out of 731 respondents, 96.5% agreed that Six Nations should have the sovereign right to determine their own path and choices regarding cannabis.

Video: Aaron Sault of Green Health for 6 presents the survey results to a public meeting in Six Nations.

94.9% of survey respondents agreed that adults wishing to purchase medicinal cannabis should be able to do so at on-reserve dispensaries, while a slightly smaller percentage – 86.4% – held that cannabis for recreational purposes should also be available on the territory.

75% of respondents identified as being Onkwehon:we and belonging to a clan and nation of the Haudenosaunee/Iroquois people and 626 of the 731 respondents provided status numbers proving their identity.

The number of survey respondents far outnumbered the turnout in all Six Nations Elected Council elections, and was more than double the 339 people who answered the last SNEC survey (without having to provide status numbers or proof of identity). In that SNEC survey a majority of respondents agreed with the statement that “Six Nations should get involved in medical cannabis.” In the face of the raids, the staff and management of King Leaf have no intention of stepping down. “We have a responsibility to provide this medicine to those who need it. We’re staying open, and we’re expanding to a new location” said Hill. “We’re also looking to do some hiring. We encourage all Onkwehon:we people interested in being a part of the cannabis industry to exercise their inherent rights and to open up their own shops, or to come and work with us.”

Six Nations Police Chief Glen Lickers was contacted over the phone with respect to this story on Saturday afternoon, but declined to comment until he returns to his office on Monday morning.