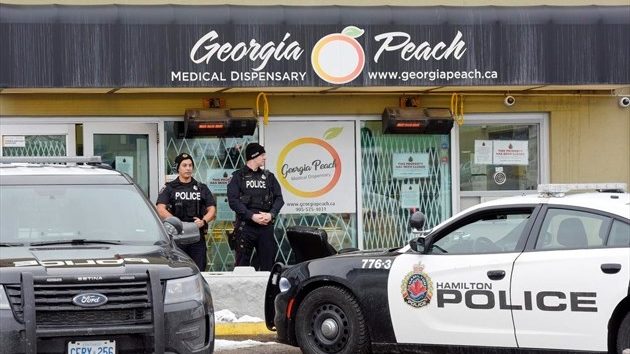 From mississauga.com link to article by Nicole O’Reilly, February 1st 2019

Both men were released on a promise to appear in court at a later date.

Six Nations police searched the property around 5 p.m. Thursday, hours after Georgia Peach announced on Twitter it had opened.

Later that afternoon, Georgia Peach deleted the tweet, and Six Nations media reported that police and citizens had blocked access to the road near the dispensary.

Twenty-five employees were charged and Hamilton police seized the properties, barring the doors, changing the locks and installing an alarm system under new powers granted by the Ontario Cannabis Act.

Police seized 250 pounds of processed cannabis, 100 pounds of resin and $50,000 in cash from the four Hamilton stores.

A day after that raid, Georgia Peach announced it was opening a new location at 76 George St., but that was short lived, and the operators announced days later they were closing.