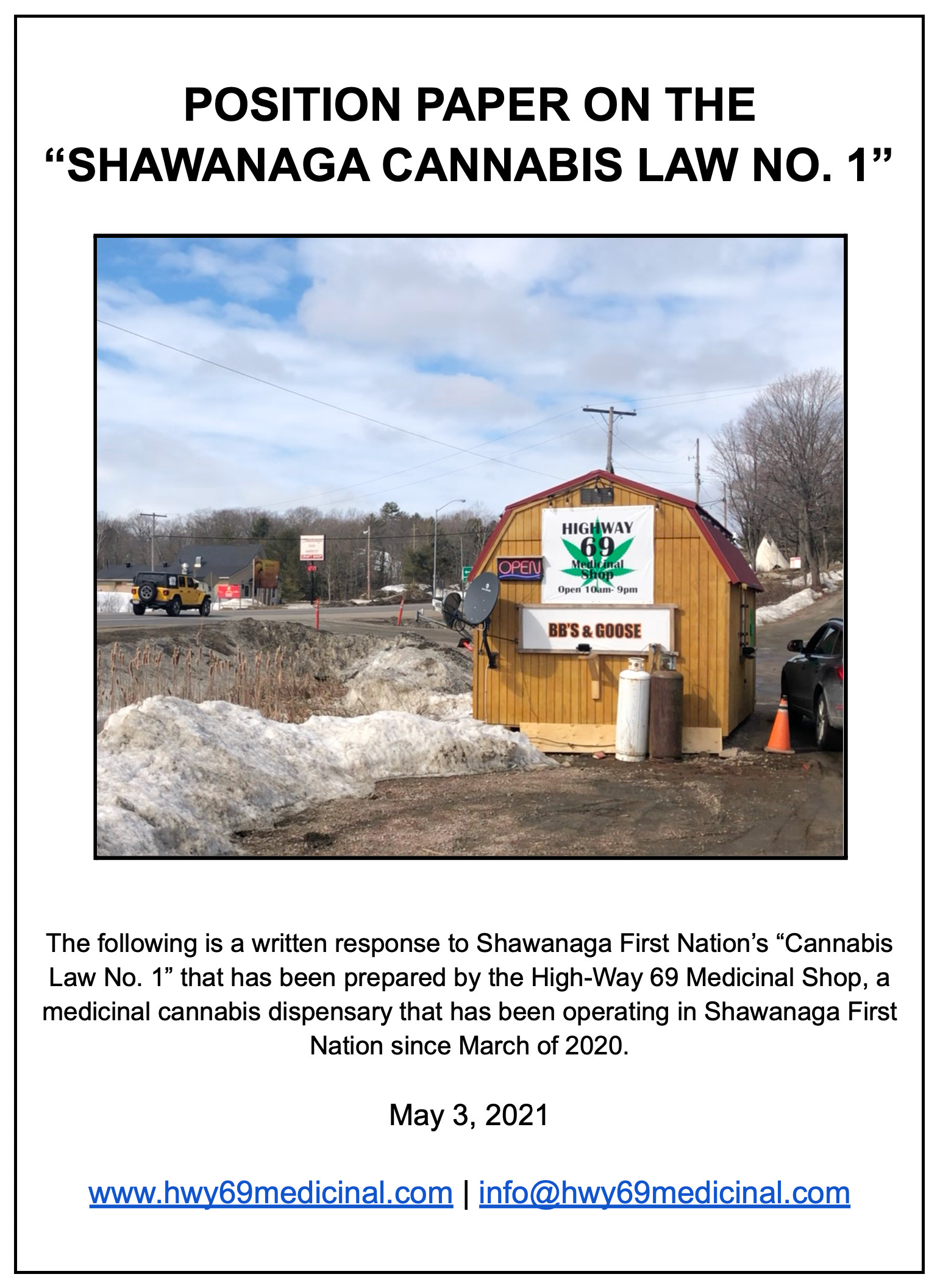 Two candidates in the May 15 band council election have also released video statements critical of the proposed law.

SHAWANAGA FIRST NATION – The Highway 69 Medicinal Shop has published a 10 page position paper blasting Band Council’s proposed “Shawanaga Cannabis Law No. 1.”  The draft law was put forward by the Elected Council after the Anishinabek Police raided the shop and a community protest was held at the band office.

According to the document, “The proposed cannabis law would result in the Band Council implementing Provincial and Federal cannabis law on Shawanaga territory. It would also give the Band Council monopoly powers over the cannabis industry in Shawanaga as the sole supply source, and would make the current operations of the High-Way 69 Medicinal Dispensary, and any other currently operating cannabis activity in the community illegal.”

The position paper “opposes the proposed cannabis law for multiple reasons, including but not limited to: A) its unconstitutional violation of our Aboriginal and Treaty rights on our unceded Indigenous lands, B.) the failure of Chief and Council to involve or consult with the people, C) the lack of transparency or accountability over the convoluted corporate structure created to monopolize the cannabis industry, and D) the way in which the law criminalizes Shawanaga members involved in the cannabis industry.”

The position paper leans heavily on arguments made by Hereditary Crane Clan Chief Del Riley, the former head of the National Indian Brotherhood who addressed a rally in Shawanaga on March 22nd, 2021 in support of the rights of the shop owners.

Two candidates in the May 15, 2021 Shawanaga election have put out video statements regarding the cannabis law.

Council Candidate Tim Ladouceur stated in regards to the law that it was incorrectly framed as a Land Law, and expressed frustration with the lack of consultation with the people of Shawanaga.

Ladouceur claims that the proposed law is designed to exert Band Council control over private business, and is strongly opposed to it. “Chief and Council want to decide who has a business and who doesn’t. Who is on welfare and who has a job. That’s not their decision. Yes we want to live our ways, but we don’t want to be on welfare, we want to have a job of our own, have a business of our own, generate our own income.”

Candidate for Chief Donna Longlade, is also opposed to the law and the approach taken by Chief and Council. In a video published on her Facebook campaign page, Longlade criticized the law saying, “It’s always been a push and shove way to do things, and I don’t think it’s correct…. It needs to be looked into further to see who owns the license, whose name is on it, where did it come from, does it exist, and is it something shown the membership, or is just something that is being held in private.”

The position paper reveals that a convoluted set of corporate structures have been set up to run the Band’s cannabis monopoly on the territory. Although the law says that SFN Cann Retail LP, – the holder of the Provincial cannabis license – is the only cannabis business allowed to operate on the territory, SFN Cann Retail LP is not named in the 2020 Consolidated Financial Statements of the band. A number of other corporate entities and limited partnerships including “SFN Cann Retail GP Inc.,” “Mashkiki Cannabis” and “Shawanaga Cannabis” have been recently created in relation to this law, but their relationship to the Band Council and their ownership and partnership structures are unknown.

The only publicly available names associated with these businesses are those of council member Daniel Pawis, and lawyer Cherie Brant, a member of the Mohawks of the Bay of Quinte, who holds power of attorney for SFN Cann Retail LP. The notice announcing the law was unsigned by Chief and Council.

Elected Chief Wayne Pamajewon and Elected Council members Patricia Pawis, Richard Jason, Dan Pawis, Alfred Stevens and Sherrill Judge were asked for comment to by Dispensing Freedom but did not reply to our inquiries.

In an interview with Dispensing Freedom held on March 22nd, Elected Chief Pamajewon promised that the membership would be able to vote on the law “because the Council doesn’t have the authority to arbitrarily go ahead and make laws and that’s it.” So far, no notice of a members meeting or vote on the law has yet been announced by Chief and Council, and no community consultation has taken place regarding the proposed law.