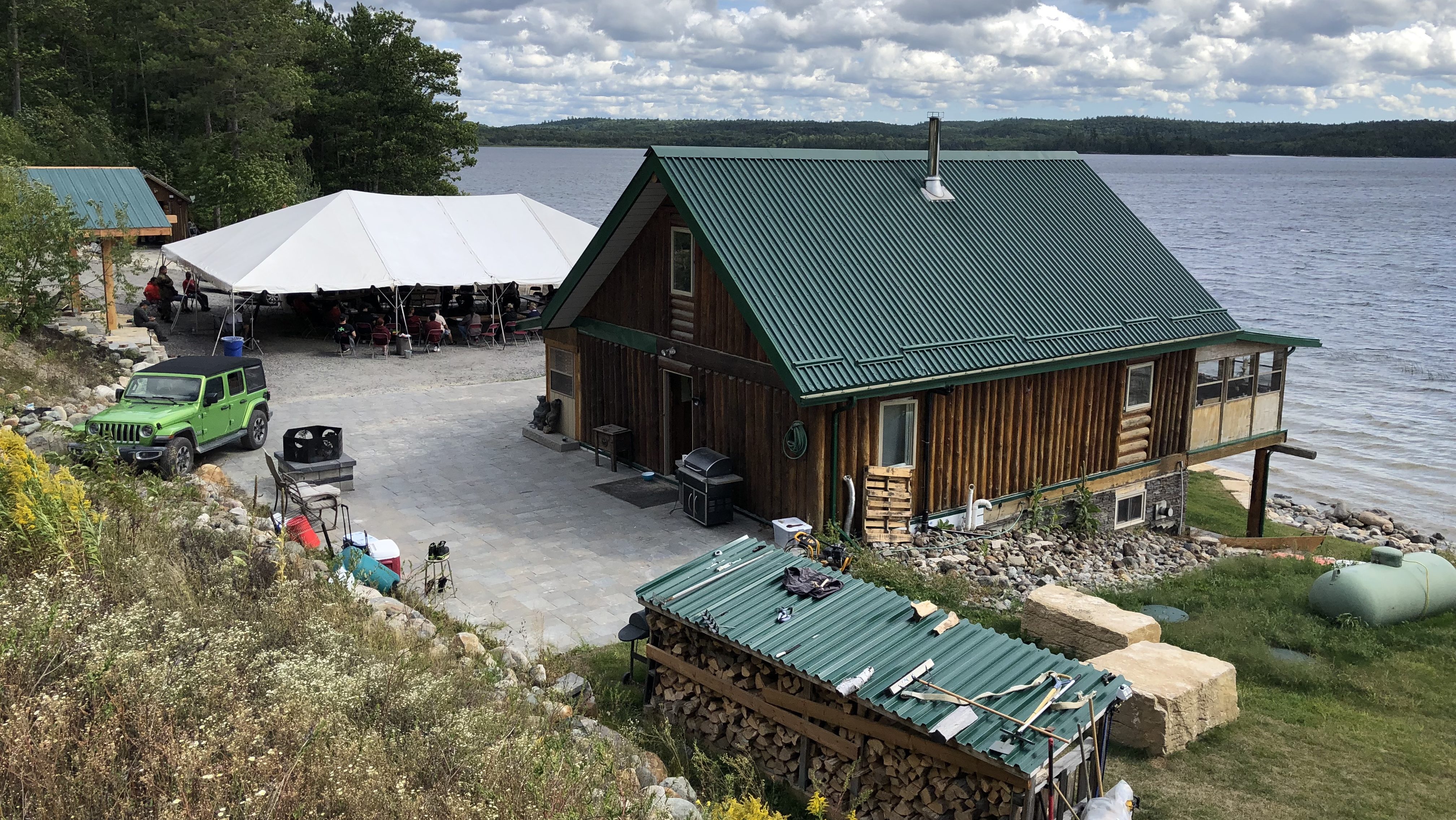 “No raindrop feels responsible for the flood”

ATIKAMEKSHENG ANISHNAWBEK TERRITORY – On Thursday August 29th, 2019, approximately 65 Anishnabek people from over two dozen different communities held a historic gathering to create an association to advance the growth of the grassroots Indigenous cannabis industry. Representatives seeking to join the association came from as far away as Akwesasne in the East and Mishkeegogmang in the North, and included delegations from Alderville, Atikameksheng, Beausoleil, Beaverhouse, Garden River, Moose Deer Point, Matachewan, Neyaashiinigmiing, Sagamok, Serpent River, Sheguiandah, Wahgoshig, Wahnapitae, and Wikwemikong territories.

The association is named the “North Shore Anishinabek Cannabis Association” and is modelled on similar associations in Alderville and Pikwakanagan that were created by participants to self-regulate the Indigenous cannabis industry. Over the course of the day-long meeting, attendees heard presentations about the experiences of Indigenous dispensaries in Wahnapitae and Alderville, and discussed how best to articulate the indigenous right to participate in the cannabis industry. The meeting concluded with a group of 19 people agreeing to step forward as an interim executive to do the work of building the association and growing the industry until the group’s next big gathering to be held in January of 2020.The event was sponsored by Bob’s Smoke Shop in Atikameksheng, the Creator’s Choice dispensary in Wahnapitae, and Victory Gardens, a garden and cultivation supply store geared to the cannabis industry. The gathering was held at the camp of Anishnawbek businessman Bob Naponse. Naponse has been active in the tobacco industry for the past 16 years, and like many others, he sees the cannabis industry as a means to bring greater prosperity to Indigenous people across Canada. According to Naponse, “cannabis has the potential to be much bigger than tobacco, and now is the time to seize the opportunity – before it passes us by.”

BAND COUNCILS IN THE WAY OF THE PEOPLE

Many participants at the meeting stated that despite having the support of their people to open dispensaries, Band Council cannabis moratoriums were holding them back from opening up stores and following the successful models developed in communities like Alderville, Pikwakanagan, Tyendinaga and Kanehsatake. Each of these communities has a thriving Indigenous cannabis industry that employs hundreds of community members. Although there are now more than 100 Indigenous cannabis dispensaries currently operating in Ontario, none of them are sanctioned by Provincial, Federal, or Band Council regulations.

However, the lack of such regulation does not mean that anything goes. For the past several years, Indigenous cannabis entrepreneurs have been holding meetings to establish their own frameworks for Indigenous self-regulation of the industry. The NSACA meeting in Atikameksheng was merely the latest in a series of meetings that has brought together hundreds of Indigenous cannabis industry participants in meetings in Tyendinaga, Six Nations, Alderville, Pikwakanagan, and Wahnapitae since 2016. These meetings have sought to develop linkages of support and nation-to-nation trading between indigenous entrepreneurs in different territories, and in so doing, they have addressed concerns such as product and community safety, and how best to give back to those in need. (The full text of the framework discussed at the August 29th meeting in Atikameksheng is available on the NSACA website.)

Attempting to get out in front of the Indigenous cannabis movement picking up speed in other communities, Band Councils in Atikameksheng, Neyaashiinigmiing, Wikwemikong and elsewhere have imposed cannabis moratoriums to prevent grassroots people from opening stores. Many of these same Band Councils have since applied for Provincial licenses and thereby invited outside jurisdiction, taxation and regulatory oversight on reserve – all without any consultation with their membership.

In contrast, the members of the NSACA are clearly focused on providing pesticide-free medicinal cannabis from Indigenous sources to people in need. While the rules by which Provincial dispensaries operate require them to be recreational and not medicinal – LPs are not allowed to refer to the therapeutic or medicinal benefits of cannabis – Indigenous cannabis retailers can’t help but see the medicinal benefits of cannabis in everything they do. According to Derek Roque, owner of Creator’s Choice in Wahnapitae, multiple clients of his dispensary have replaced their dependence on pharmaceuticals with CBD and THC based products. Others, like MS patient Sandy Stretch, can only find the medicine they need in Indigenous cannabis stores because Canadian stores simply don’t offer the same range of products.

The fact that Band Councils are imposing moratoriums that prohibit their own people from accessing the benefits of the cannabis industry on their own territory was deeply frustrating to many attendees. Don McGregor, from Whitefish River First Nation, has secured a building for his business and has the support of his people, but has been waiting for more than a year to get a formal okay from Chief and Council to open his store. According to McGregor, “We’ve been more than patient. We’ve tried to meet with Chief and Council –  we’ve sent them letters, we sent them information, we’ve booked meetings – but at the last minute the meeting was canceled.” McGregor added, “We’ve done our part in terms of due diligence, so we’re just tired of waiting, and I am ready to open.”

Over in Neyaashiinigmiing, participant Lance Johnston-Reyes is facing similar challenges. In that community, efforts made by Wiisag, a cannabis corporation headquartered in the community, provoked a backlash after locals became alarmed by the scale of the company’s project and the links between Wiisag’s founders and the disgraced Buchanan Renewables company – exposed in a series of reports by the NGO Accountability Counsel. As Johnston-Reyes stated, “Recently there was a BCR put into place to stop Wiisag from doing its outdoor grow-op. So the BCR froze all the cannabis development by rezoning the entire reserve as an area where cannabis could not be grown or sold.” Johnston-Reyes added, “I’m ready to open, but I’m debating if I should wait for council to get up and do it or if I should join the association and just pull the trigger.”

Host Bob Naponse concurred. In speaking of how Atikameksheng’s Band Council imposed a cannabis moratorium while also seeking a provincial license, Naponse said “It’s confusing as a business person. More importantly, as a band members, collectively we have to know what our moves are, and what our inherent rights are concerning sovereignty so we can move forward and help our leaders be stronger at the negotiation table.”

The meeting also received a presentation from representatives from Medicine Wheel Natural Healing in Alderville about Red Feather certification. Red Feather is a means to ensure that industry participants can access Indigenous made cannabis products that are pesticide free, tested for their CBD and THC levels, and give back a portion of their proceeds to an Indigenous cause or community. As spokesperson Devon Hartmann noted, “we want this stamp on every product to identify it as an Indigenous made product that is held to a higher standard of quality.”

Derek Roque suggested that the Red Feather program could grow to end up with a comprehensive “indigenous website that we can all pick from. It’s bigger than just one community – what we are doing is bringing back nation-to-nation trading.” Because dispensaries like Creator’s Choice grow all of their own product, Roque added that “we can assure our customers that we have a tested product and that we know where it comes from, because we grow it ourselves.” And unlike the 90+ pesticides and herbicides that Health Canada approves for government grown cannabis, Roque’s and many other Indigneous cannabis grows use no pesticides or herbicides at all.

Another major part of the day’s discussion focussed on the rights framework to be advanced. Those present made clear their wishes to advance their sovereign rights and assert Indigenous jurisdiction over the cannabis industry – with or without the support of the Indian Act Band Councils. The essence of the rights framework discussed at the meeting was as follows:

One of the goals of the gathering was to use this rights framework to increase the number of medicinal Indigenous cannabis dispensaries operating on Indigenous lands exponentially. Instead of the 100 or so Indigenous dispensaries currently operating on a sovereign basis in Ontario, organizers raised the possibility of having 1000 such dispensaries trading amongst each other to provide the Indigenous grown, pesticide-free, medicinal grade cannabis that has brought Canadians flocking in such great numbers to buy cannabis in Alderville, Tyendinaga, and other communities which have embraced the cannabis industry.

While such an expansion would not go unopposed by the Canadian system, delegates at the meeting expressed their willingness to put their bodies on the line to advance their rights. One major advance in this regard was the decision made by the Chiefs of Ontario on June 13th 2019 to pass a resolution asserting the autonomy of individual First Nations to choose their own path concerning cannabis regulation on their territories. That puts the grassroots people in a much stronger position to protect their industry, because all they have to do is get their local leadership on board and convince them not to call in the police to repress their own people.

Referencing the Chiefs of Ontario resolution, Derek Roque spoke on the need to continue to push forward. “We have them on the ropes, we do not need to be scared. Keep the drive alive, keep pushing. Because as soon as we start backing down – never mind reconciliation – the Indian Act is on the chopping block, tobacco is on the chopping block, and they do not even want cannabis to get on the block.”

Roque spoke from his own experience of having his shop raided twice by the OPP.  “Now is the time to stand up and assert your jurisdiction. Don’t be scared, they don’t want to take you to jail, they aren’t taking anything away from you. They are trying to scare you.” Roque concluded by noting the irony that when he was arrested and handcuffed, “they brought me to the police station, and the cop who took the cuffs off was a Creator’s Choice customer.”

Despite the real risks of facing state repression and conflict within their own communities, the people who gathered were aware of the importance of this moment and of the possibilities that the Indigenous cannabis movement could bring about true economic independence and freedom for Indigenous people right across Turtle Island. As one concluding speaker put it, “no raindrop feels responsible for a flood.” What the August 29th gathering represented is the continued coming together of those raindrops into a force that can sweep away the obstacles to Indigenous freedom and empowerment.

The NSACA gathering concluded with a series of medicine songs that were sung to wake up the people and to invite creation to “support the spirit of this movement” in this time of prophecy and great change.

After the meeting ended, the joints came out and participants passed them around – and continued to enjoy each others company until the sun set on the forested paradise that is Atikameksheng.