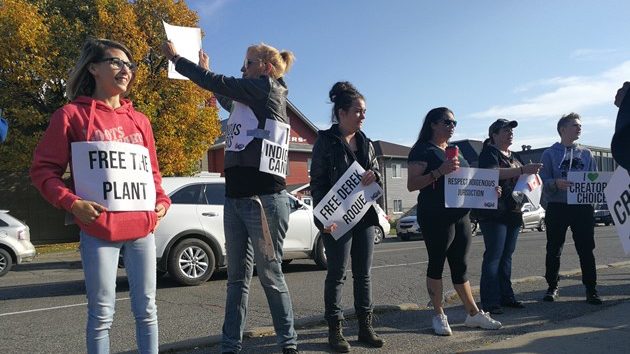 A group of about 30 people marched in front of the Sudbury courthouse for several hours on Thursday, protesting the arrest and incarceration of Derek Roque.

He is the owner of Creator’s Choice Natural Health Solutions, a cannabis dispensary in Wahnapitae First Nation.

The business was raided by Anishinabek Police on Wednesday, the third raid on the store since May of last year. It’s the second time Roque has been arrested.

After several hours, Roque was released. He says he believes there’s more to the story than police are letting on.

“There’s 130 plus Indigenous dispensaries in Ontario alone, and yet they keep on targeting northern Ontario, Wahnapitae First Nation,” he said.

Alex Allard was among the protesters.

“The police force for the community has come in under unrecognized authority and taken this gentleman and all of his stores product for no apparent reason,” he said.

The First Nation did have a referendum and the results showed support for having dispensaries in their territory.

Ted Roque is a council member at Wahnapitae.

“We shouldn’t be losing our on our economic opportunity to move forward,” he said.

“We should have the same rights. We don’t need to apply to the province of Ontario for a license, we can issue our own licenses.”

Derek Roque was released from jail on bail, and a promise he won’t go near the dispensary or contact any of his employees.

This isn’t the first time he’s agreed not to visit the business.

His arrest Wednesday resulted from a breach of a previous agreement. He’ll be back in court in October.