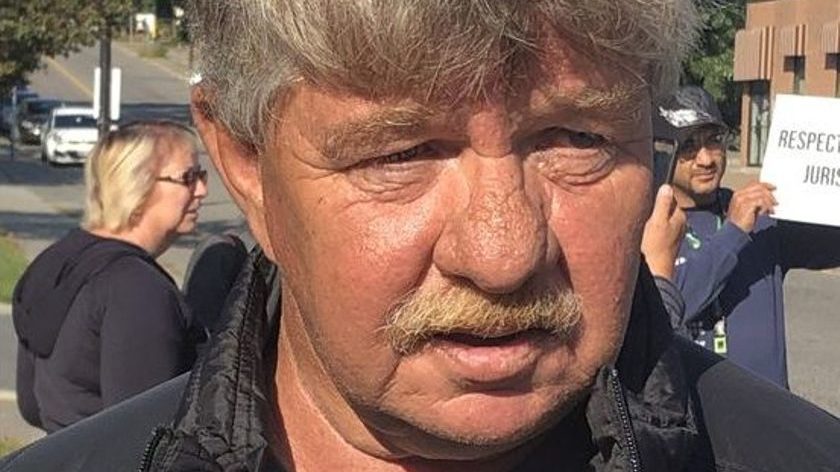 Pot raid should not have happened — Sudbury-area native leader

From thesudburystar.com link to article by Harold Carmichael, September 20, 2019

The arrest this week of Derek Roque – co-owner of the Creator’s Choice cannabis dispensary on the Wahnapitae First Nation – should never have happened, says a band council member.

“We don’t need (an Ontario) licence to do this,” councillor Ted Roque told reporters at a protest outside the Sudbury Courthouse on Thursday, referring to the sale of cannabis. “It is the Indigenous right to be economically self-sustaining … We don’t need to get permission from the province of Ontario to do this.”

More than 20 people participated in the protest with signs bearing messages such as Free Derek Roque, I Love Indigenous Cannabis, APS Out of Wahnapitae and Stop Raids.

Roque, who was on bail when he was arrested Wednesday, was scheduled to appear in bail court Thursday.

Ted Roque said Derek did nothing wrong since the Wahnapitae First Nation approved his cannabis dispensary.

“We held a referendum with on and off-reserve members being consulted,” he said. “We had a yes vote to move forward. We developed laws concerning it.

“It was wrong what (police) did,” said Ted Roque. “(Derek) should be released and products given back to the two dispensaries.”

Ted Roque said the band council put laws in place governing the operation of marijuana dispensaries to safeguard the community.

“We don’t want organized crime in our community,” he said. “We want to do things right: the same economic opportunity as everybody else … We all have the same concerns (with marijuana). It has to be done right. (And) we don’t need to be paying the province of Ontario (for licences). It’s (band revenue), not a lot, but it helps. It goes into programs.”

Ted added the same problems occurred in the past with police when First Nation communities began selling cigarettes.

“Today, (First Nation businesses selling cigarettes) have quotas,” he said. “There should not be quotas with something like cigarettes. That is ridiculous.”

As a result of the investigation, two people were charged with possessing cannabis for the purpose of selling. Items seized included suspected cannabis bud, oil, shatter (cannabis concentrate), hash and edibles. The street value of the seized products is approximately $47,430. Police also seized approximately $2,700 in Canadian currency.

“Despite (Wednesday’s) raid, we’re back in action,” they wrote. “We will not slow! We will not fail! Not an option at this point!”

It is not the first time the dispensary had been raided. In January of 2018, police seized 738 grams of marijuana, 35 grams of shatter, 336 grams of cannabis resin, 289 grams of hash and hundreds of edible pot products. Anishinabek Police also seized more than $3,200 in cash from the pot business and a conductive energy weapon, which is a prohibited weapon.

In a separate police action in Wahnapitae First Nation, also in early January of 2019, officers raided a second storefront — Creator’s Choice, on Taighwanini Trail. They arrested three people for possessing cannabis for the purpose of selling.

Roque was held for a bail hearing and appeared before the Ontario Court of Justice in Sudbury on Jan. 4. He was released on a recognizance.