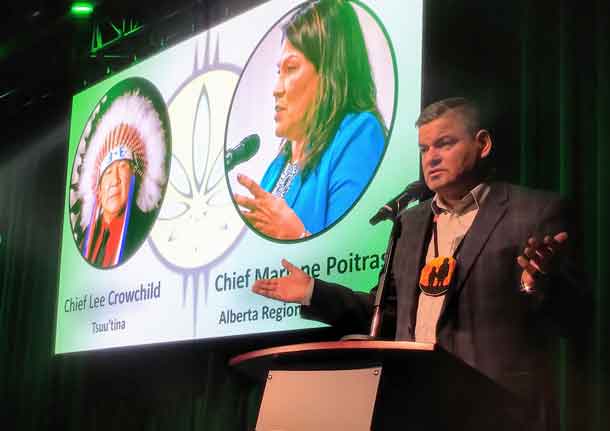 From netnewsledger.com link to article by Bryan Hendry -May 23, 2019

Serpent River First Nation –The third Anishinabek Cannabis Gathering will be held this Saturday in Wahnipatae First Nation. The first two gatherings were held in Alderville and Pikwakanagan First Nations. All three communities currently have cannabis dispensaries that combined generate millions of dollars annually in revenue, as well as millions of dollars in income for community members.

“First Nations in Ontario, and across the country, are declaring their interests and rights to participate in this industry,” said Isadore Day, CEO of Bimaadzwin, and co-ordinator of the gatherings. “This really is a once-in-a-lifetime opportunity to establish a foothold in a multi-billion-dollar market that will never disappear, that will continue to grow.”

“For those First Nation retailers who are currently operating, there are a number of urgent priorities. They want to be seen as legitimate businesses in the eyes of the community and leadership,” said Day. “This means they are eager to operate under community cannabis laws. They also want to safely operate under Health Canada regulations and provincial laws.”

A good example of the impact the cannabis industry has had in one geographical area over the past year is at Pikwakanagan First Nation on Golden Lake. The seven dispensaries that have formed the Pikwakanagan Cannabis Business Association currently employ about 100 people, who earn an estimated $2.8 million income annually. This number continues to grow. Some employees are seniors who work part-time to supplement their pensions. Indigenous cannabis business leaders are also stressing their commitment to train, hire and help advance the socio-economic interests of people who would previously be seen as unemployable.

“Pikwakanagan is about a 90-minute drive from the City of Ottawa. Since the three provincially regulated cannabis dispensaries opened in Ottawa on April 1st, cannabis sales actually increased in Pikwakanagan,” said Day. “In fact, business has also increased for the local gas stations, restaurants, and businesses both on and off-reserve in the Golden Lake area. As long as consumers recognize that they are able to purchase quality cannabis, they will make the trip from the Ottawa—Gatineau area.

“In the meantime, there are a number of First Nation communities in Ontario who are currently drafting cannabis by-laws. In the years to come, these communities will be involved in producing, processing and selling. They will also establish a network that has the potential to become a significant economic generator for generations to come.

“At the end of the day, every single Indigenous individual or community who wants to either invest, or become directly involved in the cannabis industry, has the potential to grow and prosper for many years to come,” concluded Day. “That economic potential must also be respected, accepted, even celebrated by mainstream governments who realize that our Peoples have every right to grow their economies, locally, regionally, nationally, and globally.”

For information on the Anishinabek Cannabis Gathering, visit   https://bimaadzwin.ca/anishinabek-cannabis-gathering/