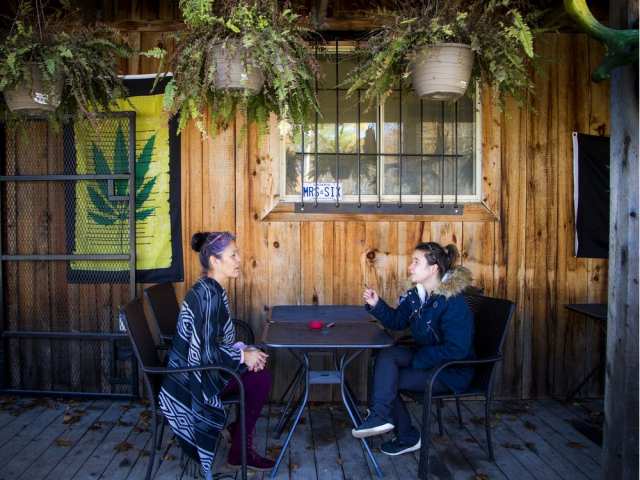 From ottawacitizen.com link to article by JACQUIE MILLER, November 1, 2019

It’s one of a handful of unlicensed cannabis stores on Algonquins of Pikwakanagan First Nation territory in the Ottawa Valley.

Now she hopes to add a second shop on her property — this one licensed by the provincial government.

That’s a possibility since Kohoko is one of 26 applicants given the right by the Alcohol and Gaming Commission of Ontario to apply for cannabis store licences on First Nation territories.

She may put the government-licensed store upstairs in the same building as Madashk, says Kohoko. Or she could create a new store on the property she owns with her husband.

She plans to consult with the AGCO.

Kohoko’s situation illustrates some of the complications that have arisen with cannabis shops on First Nations territories.

The provincial government vowed when recreational marijuana was legalized a year ago that illegal shops would be shut down. Most of them are gone, including about two dozen stores that had operated in Ottawa.

But clusters of cannabis stores thrive on some reserves.

Pikwakanagan Chief Kirby Whiteduck says the band is developing its own regulations to govern cannabis stores. But the process is slow and tangled by jurisdictional issues such as who would enforce the rules.

Kohoko and other cannabis entrepreneurs at Pikwakanagan aren’t waiting. The eight shops on the reserve range from a trailer in what used to be a residential front yard to a large building with a parking lot. They have attracted so many customers that new stop signs and speed bumps were added on the rural highway that is the main drag.

“I’m patiently awaiting my band council to issue my licence,” says Kohoko. “They are our government.”

As far as she is concerned, the operation of Madashk is not the business of the AGCO.

Whether the AGCO will see it that way remains to be seen.

A spokesperson for the agency said that applicants must abide by the regulations. The regulations say anyone charged or convicted of illegally selling cannabis is not eligible for a store licence.

However, Kohoko has not been charged with anything. The OPP have not raided or laid charges against any cannabis shop operators at Pikwakanagan.

Before the regulations were passed, however, provincial politicians made it clear that anyone who continued to operate an illegal shop after legalization was not welcome to run a legal one.

“(Politicians) basically said if you don’t shut down your store before Oct. 17 (2018) you will never get a licence,” says Matt Maurer, a Toronto lawyer specializing in cannabis policy. “But if you do, anything’s possible.”

The AGCO has latitude to deny licences based on a “good character” clause, he says. “If they feel you are not of good character, or honest or trustworthy to run a store, they can deny a licence.”

“That’s how I expected it would play out.”

However, the situation on First Nations Reserves is complicated because of self-government.

“If the territory didn’t have an issue with that person operating an illegal store, and they also support a legal store being operating by that person, I can see the government saying, ‘We are going to go ahead and license it anyway because everyone on the reserve  is good with it, including the band and the council,’” says Maurer.

Ontario is working with some First Nations leaders and communities that want to work with the AGCO to “operate safe and secure retail outlets in their communities,” according to a statement from the Ministry of the Attorney General.

“Additionally, we understand that some First Nation communities may wish to develop their own specific approaches to the retail sale of cannabis. Ontario’s cannabis legislation includes the flexibility to accommodate community specific on-reserve approaches and provides authority for the Attorney General and Minister of Finance to enter into agreements with First Nations communities related to cannabis regulation including: minimum age, private retail, enforcement, and other matters within the scope of the legislation.”

Kohoko says when she heard last summer that the AGCO was looking for people to run cannabis stores on reserves, she put her name forward. Applicants were required to have a letter from the band council approving their location. After that, it was first-come, first-served for the right to apply for a licence.

The AGCO initially said it would allow eight licences on First Nations territories, but last week it increased the number to 26, which included everyone who had expressed interest.

When the Citizen reached Kohoko, she had not heard the news that she was no longer just on the waiting list.

“Get out! How come nobody emailed me?

“Oh my God!  I was wondering why people were calling me to congratulate me. I thought they must know something I don’t, because last time I looked I was 17 on the  waiting list. Right on!”

Kohoko says that also explains why she received a sales pitch from an insurance company specializing in policies for dispensaries. “The bloodsuckers always know everything first,” she laughs. “Next I’ll have a lawyer, I’m sure, calling me.”

She expects the AGCO will work with her on following the rules for setting up a licensed shop.

Kohoko decided to open Madashk after working at another dispensary down the road. “Once I saw how it works and what not, I figured I have my own space, I can do this, too.”

Kohoko says she’s mystified by the stigma that still surrounds marijuana. “In a world of crack and speed and coke, I don’t know why people are trying to vilify marijuana. To me it seems ludicrous.”

She also hates the term “pot shop,” calling it degrading. “We are dispensaries. I am a marijuana dispensary. And I’m also a person of medicine. When someone calls me a pot shop, it’s kind of personal.

“I make my own medicine as well, so I don’t like that term.”

Kohoko makes salve from plants she collects in the fall. “Cattail roots, mainly, is my go to.” The salve helps with sciatica, bone spurs, carpal tunnel and fibromyalgia, she says. “Cattail is a natural anti-inflammatory.

“My mom showed me how to do it, and her grandma showed her.”

The biggest seller at her store is dried weed. She has one shelf of bud grown by friends in the area. “I’ve known growers here forever, since I was a teenager, and I’m going to be 50 this year.”

She also buys dried flower from “the city” and B.C.

She has no trouble sourcing other products, such as oils, tinctures, bath balms, gummy candies and vape pens. Salespeople come by offering their products, and she gets regular deliveries.

“You would not believe it. When I first opened up, I had more people trying to sell me stuff than buy. It was crazy, I was ready to put a sign up on the door saying No Soliciting because I’m trying to sell to people, not buy it.”

The gummy candies, CBD oils, tinctures and other products under the Two Canoes brand are purchased wholesale from another dispensary down the road.

She’s heard about concerns over illicit cannabis vape pens associated with severe lung illnesses and death in the U.S.

She plans to ask her suppliers for more information about what’s in the pens, and may take them off the shelves.

“Almost all of the product that come are all labelled, or I ask how they make them, what they use for their (cannabis) concentrates.”

Kohoko acknowledges that she has no idea if the labels are correct, however, because the products are unregulated.

“That’s true. I don’t know. I just go by what they basically tell me. Until the government decides to do something with these companies that are making pens, I think the government is going to have to get after them and make them toe the line, you know.”

“My own mom, she had bronchial asthma. She’s being using a CBD pen for the last two years and she has not had to have a mask treatment, which she normally does, twice in the winter and twice in the summer.”

She refuses to sell e-cigarettes with nicotine or cigarettes, though.

“I refuse to carry tobacco products or any of that baloney. I won’t do that. I just don’t. I’m a recently quit smoker, as of January. The thing that helped me get off the cigarettes was the marijuana.

“I would never have (tobacco). Plus it’s cancer. In a stick.”

Kohoko estimates that three-quarters of her customers buy marijuana for medicinal reasons.

“You’d be totally shocked at the number of seniors.”