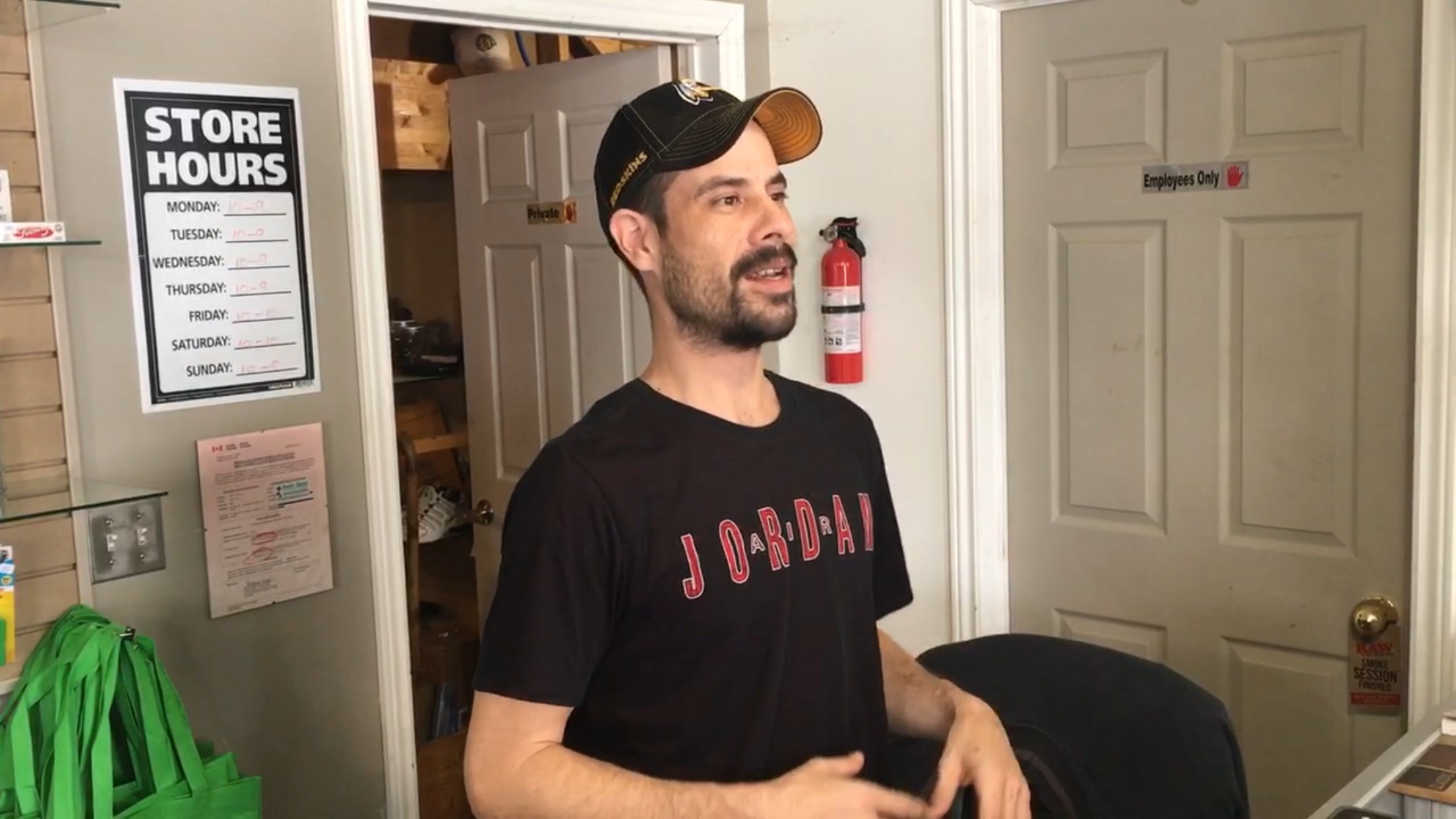 With so many dispensaries popping up around the country as the laws and attitudes towards marijuana use change, it can be a real trip to wade through the innumerable strains, products and opinions available. While experienced users may remember some basic questions to ask their local, friendly neighbourhood dispensary, the inexperienced – many of whom are first-time medicinal users, not seasoned stoners – will undoubtedly struggle to make sense of it all.

That’s where people like Jamie Kunkel, founder and owner of Smoke Signals – located at 255 Hwy 49, on Tyendinaga – come in.

With more than 25 years of experience in the medicinal cannabis industry, and with a background in botany, horticulture and business, Kunkel, a Mohawk of the Bear Clan, has established a reputation in his community as a go to person for medical relief.

“Everybody has come to me for help, knowing that I’ve put 25 years into this industry,” he says. “They always have – before any of this existed, before this store…they came right to my front door-step and asked me for these things, knowing that I had the know-how.”

Today, Smoke Signals is a one-stop shop for medicinal cannabis and all its derivatives – from dry flower to extracts to CBD pills and tinctures. Many products are made in house in order to ensure quality control. Others are imported directly from medical producers in British Columbia.

Most of the products are also enhanced with natural plant terpenes, which not only add flavour to the products but also “enhance the effects of both THC (the psychoactive ingredient) and CBD (the analgesic ingredient),” Kunkel adds.

Smoke Signals also carries their own bear salve mixture – a combination of bear grease, coconut oil, vitamin E, essential oils and cannabis. The recipe for this salve has been used in Kunkel’s family for over 150 years and been passed down generation to generation.

“Not only does it already have a 150-year reputation of being a good product,” Kunkel says. “But now that we’ve infused it with the cannabis plant… it has even more medicinal benefits.”

However, the store does refer prospective customers to BMA Hydroponics which will put people in touch with doctors willing to write a cannabis prescription.

“You can acquire your medicinal license there, provided you have a doctor’s note or proper proof of your ailment,” Kunkel says.

The idea behind referring people to pot-friendly doctors is all about community outreach rather than profit-making, he clarifies.

In fact, that’s been one of Kunkel’s goals since the late 1990s and early 2000s, when he began selling tobacco. At the time, business was going so well that he was able to employ many of his family members and even help to build his mother’s home.

More importantly, he says, he was fortunate enough to be in a position where he could support his community when the band offices and councils fell short.

“For anything that I ever heard the band office tell the people that they couldn’t have, I purposefully went out and figured out how they could have it,” he says. “They’re my neighbours, they’re going without, I have more than I need, how can I not give back to them? I’ve known them my entire life and I know deep inside that if it was the shoe on the other foot, they’d do the exact same thing for me.”

Though the tobacco business brought him fortune as a young man it did not bring him stability or friendship. After choosing to leave the business and the money when his mother became ill, he also lost all the fake friends and people around him who only wanted to leech off of his success.

Today, he surrounds himself with these people, many of whom work alongside of him.

Kunkel stresses that what he is doing is perfectly legal. Smoke Signals  sells only medicinal product and only to people carrying a medicinal license and/or prescription.

“The newer generation are accepting of cannabis because they are educated in it,” he says. “They know of its healing benefits. They know it’s not just there to get high with. Whereas for the older generation, it’s been stereotyped.”

The importance of the plant’s healing powers as opposed to its recreational use became most evident about three or four years ago, he explains.

At the time, he had just opened up a new vapour lounge – the kind of business that was just coming onto the scene. The store, which operated for about 10 months, only sold edibles and had a big screen television, games and a bar-like area that did not sell alcohol but where people would often sit and talk.

“It was just a place that everybody could sit and socialize,” he says. “And that was the very first kind of a boom to the medicinal market – vapour lounges.”

Soon, marijuana users were able to get together and discuss their medicine of choice without being hassled. For, as Kunkel says, although patients were already able to get medicinal licenses, cultural attitudes around marijuana were still driven by the type of irrational  and ignorant fear-mongering that had kept the plant underground for decades, and its users relegated to cold basements and empty parking lots.

“You got a medicinal license but you still gotta be made to feel like a criminal,” Kunkel says. “So when I first opened the vapour lounge, it was a place to give everybody that had a medicinal license, a place to sit and socialize with each other. You could be sharing how you’re going about your sickness, how you’re treating it, what are the actual symptoms of your sickness. There are a lot of things out there that people don’t know, and until you can allow these people to actually sit together and socialize, a lot of that stuff is not going to come out.”

If marijuana has helped heal people of their medical ailments, people like Kunkel have helped to heal his community and all those wanting to learn of their ignorance around this powerful plant.

Kunkel is also a firm believer in his people’s sovereign right to use and benefit from the plant.

“I believe it is a traditional right for us…It’s been here since the beginning of time…We’ve always used it…It’s no different than our Indian tobacco, our sweetgrass, our sage. It’s another plant that comes from Mother Earth, that we as an Indigenous people have always used, always use now, and always will use.”  o