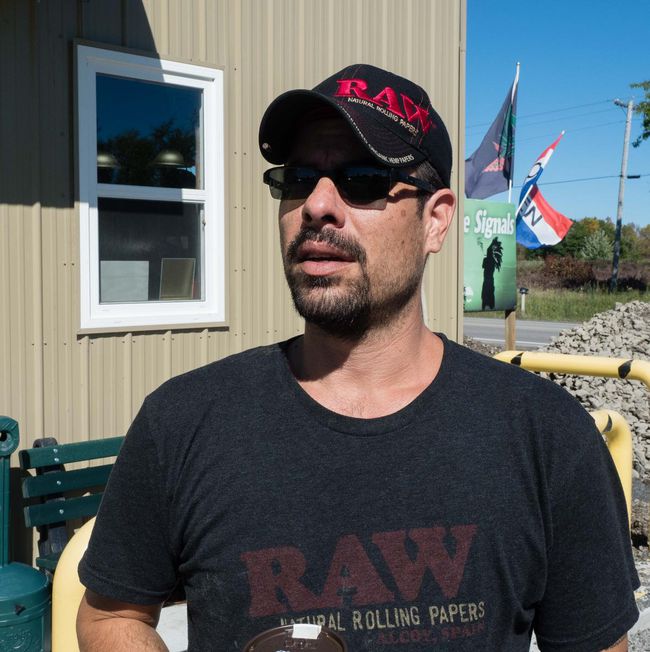 Tim Barnhart has a problem that few Indigenous entrepreneurs before him have ever experienced.

With annual sales of more than $20 million at Legacy 420, his cannabis superstore on the Tyendinaga Mohawk Territory in eastern Ontario, Barnhart has no difficulty meeting an annual $3.7-million payroll.

The struggle is finding local Indigenous workers to take the myriad jobs Legacy 420 now offers in the business of growing, testing, guarding, transporting, processing, bottling, baking and selling 60 strains of high-grade marijuana to an increasingly far-reaching and enthusiastic customer base.

“We’ve got people coming from far outside the community now,” Barnhart says during a tour of the expansive Legacy 420 facility. “We have no choice.”

The economic benefits of cannabis are spilling far beyond the borders of Tyendinaga, located on Lake Ontario’s Bay of Quinte between Belleville and Kingston. With anywhere from 30 to 50 cannabis shops now operating openly on the territory — taking every form, from convenience stores to trailers to purpose-built emporiums like Legacy 420 — the transformation has been profound.

But cannabis has brought more than prosperity to Tyendinaga. To entrepreneurs and activists like Barnhart, the business is also a potent political tool with the potential to help all First Nations achieve long-sought independence, unfettered by clumsy federal supervision — or taxes.

“Every person that was looking for a job has a job. There’s income all around. Houses are getting siding and grass in their front yards. People are driving respectable vehicles, not the Indian cars anymore. And people are getting off of the system, whether it be disability or welfare.”

Kunkel and other Indigenous entrepreneurs are proud to defy the new federal laws governing cannabis — and for its part, the law has largely ignored the challenge.

Tyendinaga chief Don Maracle declined to comment for this article, Crown attorneys have chosen not to lay charges, and local police have given up their earlier, half-hearted efforts to suppress the trade.

“The resistance, as you can see, is huge,” Barnhart says. “Up to 50 stores is huge resistance.”

“You do the math,” adds Kunkel, noting that about two dozen extended families make up the entire population of the reserve. “So every family has two stores. How do you turn against your family and say, ‘No, you can’t do this,’ or ‘No, you can’t participate in the economic development that’s happening now right in front of your face?’ ”

The Smoke Signals franchise now comprises four outlets in Ontario and the West as well as the store Kunkel operates amid a cluster of competitors on Highway 49.

“My goal is to have a Smoke Signals in as many Indigenous communities as are willing to have them,” he says.

Legacy 420 is hoping to spread its influence through the National Indigenous Medical Cannabis Association, which it recently established to represent the industry and provide technical expertise to members.

For now, the business operates in a large new building surrounded by a tall electrified fence in the heart of Tyendinaga, serving a constant stream of customers coming from as far away as Toronto and Montreal.

Barnhart boasts that the facility, capable of handling every aspect of the cannabis business under one roof, “from seed to sale,” is unique in the world. While technically illegal, the business was designed to comply with all the complicated rules set by Health Canada to govern the cultivation and distribution of medical-grade marijuana.

Heavy safes keep inventory secure until an in-house team of technicians, most of them graduates of Loyalist College in Belleville, can assay the purity and chemistry of the shipment. Each batch is traceable to an individual grower, most of whom are licensed by Health Canada, according to Barnhart.

The products are guaranteed to be free from mould, pesticide residues and organized-crime involvement.

“We know what we’re selling, and everybody can be assured of that,” Barnhart says.

Like other native people in Tyendinaga, Barnhart claims “an inherent right to do this, a constitutional right.” But there are other reasons his company complies with rules whose validity he denies.

“We built it so that we’d be able to withstand every legal challenge,” he says, adding that Legacy 420 was designed to be “something the government couldn’t knock down.” And like all the other cannabis outlets now proliferating in Tyendinaga, it is designed to make a defiant political statement.

“We built it to prevent them [the federal government] from building it for us,” Barnhart says. “Our whole lives they’ve been coming in and building everything for us, and telling us what our nations need. We’re telling them that’s not working anymore. We want to assert our rights and show Canada we can strive and move forward.”

By grace of a plant, prosperity and sovereignty now march hand-in-hand in Tyendinaga.