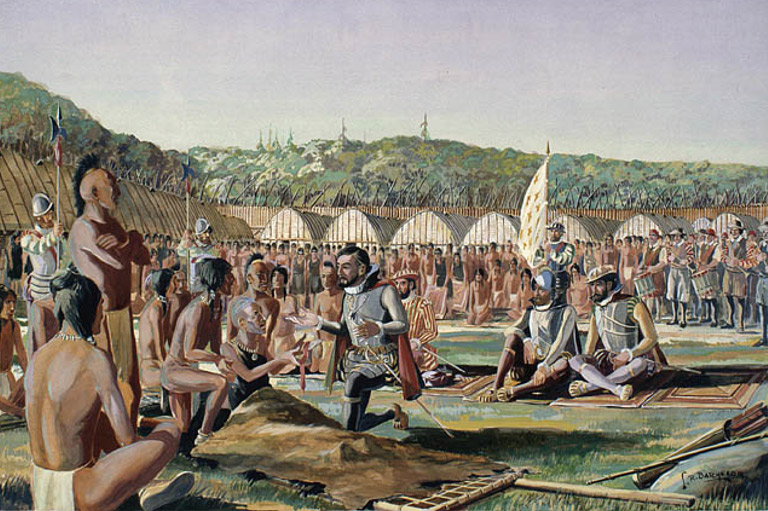 The History of Indigenous Cannabis: Natives, Explorers, and Colonists

The Vikings depended on hemp for their sails and rope, and they probably carried hemp seed with them and planted it when they visited North America about a thousand years ago. Sailors usually carried supplies of seeds with them to provide the necessities of life in case of shipwreck. Cannabis was already in North America in prehistoric times, possibly brought from China by explorers, drifting shipwrecks, and birds migrating across the Bering Strait to the west coast of the continent.

Some of the earliest evidence of hemp in North America is associated with the ancient Mound Builders of the Great Lakes and Mississippi Valley. Hundreds of clay pipes, some containing cannabis residue and wrapped in hemp cloth, were found in the so-called Death Mask mound of the Hopewell Mound Builders, who lived about 400 B.C.E in modern Ohio.

In his 1891 study, Prehistoric Textile Art of Eastern United States, Smithsonian Institute ethnologist W.H. Holmes describes the recovery of large pieces of hemp fabric at one site in Morgan County, Tennessee: the “friends of the dead deposited with the body not only the fabrics worn during life but a number of skeins of the fiber from which the fabrics were probably made. This fiber has been identified as that of the Cannabis sativa, or wild hemp.”

Nearly two millennia after the age of the Mound Builders, European explorers seemed reassured by meeting up with a familiar plant upon their arrival in an alien “new world.” The Florentine Giovanni da Verrazano wrote thoughtfully of the natives encountered during a French expedition to Virginia in 1524: “We found those folkes to be more white than those that we found before, being clad with certain leaves that hang on boughs of trees, which they sewe together with threds of wilde hemp.”

The French explorer Jacques Cartier also reported seeing wild hemp during each of his three journeys to Canada between 1535 and 1541. His last report enthused that “the land groweth full of Hempe which groweth of it selfe, which is as good as possibly may be seene, and as strong.” Later, Samuel de Champlain mentioned in 1605 that the natives used “wild hemp” to tie their bone fishhooks.

The first European colonists used wild hemp when they arrived in America. There was not enough of it, however, and labor was in short supply too. Food crops, especially corn, were the first priority, and the colonists were not eager to grow hemp, although the seed is excellent food. But the European motherland wanted hemp, and in service to France Quebec colony minister Jean Talon simply confiscated all the thread the colonists possessed and forced them to buy it back from him with hemp. He loaned the necessary seed to the farmers who were required to reimburse Talon with fresh hemp seed from their harvest.

Hemp cultivation was deemed mandatory for English colonists as well. The Puritans grew hemp at Jamestown in keeping with their 1607 contract with the Virginia Company. Virginia governor Sir Thomas Dale brought with him instructions to plant a communal garden in which to experiment with hemp and flax. By 1616, the Puritans were able to claim of their flax and that there was “none better in England or Holland.”

But however vital hemp and flax were to the economy, colonists preferred to grow tobacco. Tobacco prices were almost always higher, supported by Europeans already hooked on nicotine, and tobacco was less labor-intensive. Despite the overwhelming demand for hemp, only when the tobacco market went through periodic crashes would tobacco farmers “rediscover” hemp, and they always went back to tobacco after the market recovered.

In response the Virginia Company issued a directive in 1619 that every Jamestown colonist was to “set 100 plants and the governor to set 5000” hemp plants. In the same year, the Virginia General Assembly also required the colonists to grow “both English and Indian hemp.” Gabriel Wisher was assigned a budget of 100 pounds with which to hire several skilled Swedish and Polish hemp dressers and entice them (with ten pounds each) to emigrate to America.

Some Massachusetts colonists led by Thomas Morton founded the Merrymount trading settlement, where they began to view the world in a new way, inspired by smoking hemp in the peace pipe with natives. Their bonfire and Maypole parties eventually evoked the rage of the Puritans, who burned down the outpost and sent Morton to an English prison.

Mandatory hemp cultivation continued in later years and in other areas of the New World. In 1637 the General Court at Hartford, Connecticut, ordered all families to plant one teaspoonful of hemp seed. Massachusetts did likewise in 1639. The General Assembly of Connecticut repeated its order in 1640, insisting that the colonists sow hemp “that we might in time have supply of linen cloth among ourselves.”

Several colonies passed legal-tender laws by which certain manufactures, particularly hemp, flax, and tar, could be used to pay debts and taxes. Hemp was so valuable and necessary to the British economy that in 1662 Parliament authorized Virginia governor William Berkeley to offer a bounty of two pounds of tobacco per pound of finished hemp, and other colonies offered similar enticements.

By 1690 there was enough hemp, flax, and cotton available in North America to supply a paper industry. The first paper mill in America was established in Pennsylvania by the firm of Rittenhouse, and others followed suit.

The success of hemp cultivation impressed those who witnessed crops at their peak. The Dutch farmer Antoine Le Page du Pratz, who came to America to act as overseer of French plantations near the present site of New Orleans and who was familiar with true hemp, wrote in his journal in 1719: “I ought not to omit to take notice, that hemp grows naturally on the lands adjoining to the lakes on the west of the Mississippi. The stalks are as thick as one’s finger, and about six feet long. They are quite like ours in the wood, the leaf and the rind.”

Colonial governments encouraged hemp production with varying degrees of severity and success. The 1720-1722 sessions of the Connecticut General Assembly approved a bounty of four shillings per “gross hundred” of partially processed hemp to encourage its continued cultivation, while Virginia continued to pass laws designed to compel land owners to produce the crop, fining farmers who did not comply.

Others states were more diplomatic: South Carolina’s legislature voted in 1733 to pay a salary to Richard Hall to educate the public about the benefits of hemp and the need for hemp and the need for hemp and its cultivation. He was hired to write a book on the subject, promote the hemp industry for three years, and travel to Holland to procure good hemp seed. Local governments may well have been hoping that this crop would provide economic stability for the new colonies.

In the introduction of his Observations on the Raising and Dressing of Hemp, written in 1777, Edward Antil declared, “Hemp is one of the most profitable productions the earth furnishes in northern climates; as it employes a great number of poor people in a very advantageous manner, if its manufacture is carried on properly: It becomes worthy of the serious attention of every trading man, who truly loves his country.”

With the Revolution at hand, the prominent Virginia landowner and politician Robert “King” Carter anticipated in 1774 that his tobacco “next summer will be in little demand,” and he instructed his foreman, “in place of tobacco – hemp and flax will be grown.” Mandatory cultivation laws were passed “as a preparation for war. Each tithable is bound to deliver every year one pound each of dressed hemp and flax or two pounds of either under oath that it was of his own growth.”

A revolution is fought on more fronts that just the battlefield, and hemp, as the major source of paper in the colonies was essential for communication. In addition to clothing the revolutionary soldiers and equipping the navy, hemp-paper pamphlets and documents spread the revolution of ideas through the colonies and helped establish the desire for independence in colonist’s minds. By the time Thomas Paine exhorted his fellows to fight for freedom with Common Sense in January 1776, he could point out that “in almost every article of defence we abound, Hemp flourishes even to rankness, so that we need not want cordage.”