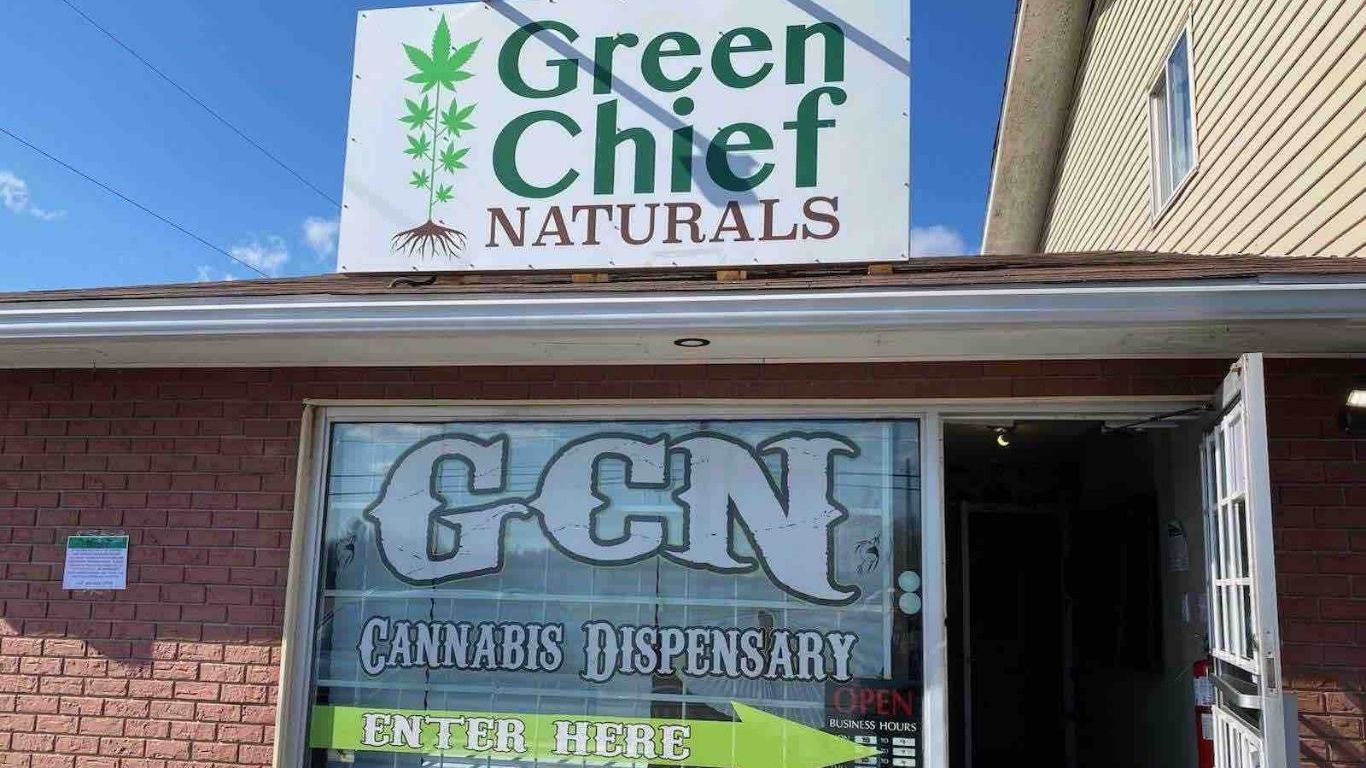 A First Nations retailer in Ontario says they are now selling products from Canada’s first 100% Indigenous-owned and operated cannabis producer.

A manager at Green Chief Naturals, licensed to operate by the Mohawk Council of Akwesasne, confirms that they began carrying two varieties of dried cannabis from Seven Leaf on Friday, April 23. This appears to represent the first product from a federally licensed cannabis producer being sold in a retail location not authorized by a provincial cannabis authority, but instead by local First Nations authorities.

Seven Leaf was first licensed by Health Canada for cannabis production in 2019 and is located on the First Nation territory of Akwesasne. The Akwesasne are a Mohawk band also known as the Kanienkehaka Nation. While most of their land is in the United States, part of their territory is within Ontario and Quebec, including Cornwall Island where both Green Chief and Seven Leaf are located. The community enacted their own regulations for cannabis in 2018.

Tom Smart, a manager at Green Chief Naturals, says the product just came up for sale today and is already receiving considerable interest and demand.

“We just put it out on the shelves today,” says Smart. “Their employees are actually flying in here and buying them all up right now. They all want to test it out.”

“What’s kind of cool is the company is an Aboriginal company that’s from here, so it’s basically Mohawk made, Mohawk owned, and they’re selling on the Mohawk Nation. So I think that’s great what they’re doing.”

Smart says Green Chief Naturals have been waiting more than a year to get Seven Leaf’s product into their store. He explains they get a lot of business from the local community in Cornwall, but also see visitors from other parts of Ontario and Quebec, although this is less common during covid restrictions.

Although Seven Leaf was unavailable for comment on this story, two different sources connected to federally licensed cannabis producers tell StratCann that they have heard from a representative of the company, who offered to provide a broad distribution channel for their products into numerous First Nations retailers.

An image of the product sold in the store shows an Ontario cannabis excise stamp. Smart says it is the only product they carry with such an excise stamp.

Such sales would likely be seen as a challenge to existing federal and provincial cannabis regulations, although many Indigenous communities such as the Mohawk Council of Akwesasne have sought to exercise their own authority over cannabis retail sales and production, especially within their own communities.

The Six Nations People’s Cannabis Coalition, which includes the Mohawk community of Akwesasne, has been meeting to discuss their management of cannabis, and is scheduled to meet again on April 29.

“It’s something that, politically, the argument really resonates with folks. Like let’s just do what we’ve done in tobacco.”

In an interview from 2019, Lewis Mitchell, president and part owner of Seven Leaf, said he and the company are committed to operating according to federal law. The federal Cannabis Act only allows licensed cannabis producers to sell into provincially and territorially authorized retail channels. Although Ontario has several licensed cannabis retailers on First Nations Land, Green Chief is not one of these, and operates under the regulations of the Mohawk Council of Akwesasne.

A spokesman for Ontario’s Ministry of the Attorney General says that Ontario’s cannabis legislation is a law of general application (meaning the provincial law applies to all of Ontario, including First Nations lands), noting that the province’s Cannabis Control Act of 2017 prohibits any person from selling or distributing recreational cannabis, other than authorized cannabis retailers and the Ontario Cannabis Store.

The spokesperson also noted that the provincial legislation provides authority for the Attorney General and Minister of Finance to enter into agreements with First Nation communities related to cannabis regulation including: minimum age, private retail, enforcement, and other matters within the scope of Ontario’s cannabis legislation.

“The government will continue to engage with First Nations interested in developing their own approaches to cannabis to identify how the government can best support efforts by these reserves to promote public safety and legal access to cannabis,” the representative tells StratCann.

Note: This story has been edited to include the above comment from Ontario’s Ministry of the Attorney General.

Sara Mainville, a partner with Olthuis Kleer Townshend, a law firm that works with Indigenous communities, says this is a complex and ongoing political and legal issue that touches on First Nations sovereignty and how it interacts with provincial and federal jurisdictions in Canada.

“The fact that First Nations are asserting their laws supersede provincial law, that is political as it is legal,” says Mainville. “But there are definitely some legal arguments to be made that a provincial authority can be ousted, particularly with an interpretation of the both Indian Act and recent case law that’s coming out of the federal court around an exercise of inherent jurisdiction by First Nations communities,” explains Mainville.

She sees similarities to how many First Nations have authority to manage tobacco production and sales within their jurisdictions, but also cautions that it’s a tricky political issue that could make its way into the courts if the provincial or federal government wants to push back.

“It’s something that, politically, the argument really resonates with folks. Like let’s just do what we’ve done in tobacco. Not that we’ve achieved all of our goals regarding jurisdiction around tobacco. There’s still a lot to do with provinces, but definitely [there is a question of] why do we have to reinvent the wheel here when we’ve got recognition of the ability to manufacture and distribute tobacco from First Nation community to First Nation community in Ontario and the Ontario Tobacco Tax Act.”

“Seven Leaf [getting licensed] was definitely seen as sort of a progressive step by an entity to achieve Health Canada licensing as well as Akwesasne licensing. So I think that they were proof that you could do both.”

Although she says she thinks there could potentially be a strong legal argument to be made for a cannabis producer to distribute to a retailer within the same First Nations community, to ship outside that community would likely be a more difficult argument to make in court.

“I’m hopeful that they’re getting legal advice around this because it’s difficult going outside of your jurisdiction,” says Mainville.

“Once these products leave a First Nations reserve, then how do you maintain First Nations jurisdiction in the territory outside? I’m sure that there are strong Mohawk legal arguments for a much broader territory than the reserve itself. I’m certain that exists. But certainly some of the trade and commerce commitments made in treaties, including that 1764 treaty at Niagara, also certainly interplays with all of this. But it’s challenging. Definitely, if I were to choose a court challenge, this would not be the court challenge I would put out there. I would put out a specific court challenge around the jurisdiction in the First Nation land around cannabis. There’s a stronger claim than one around the transportation of cannabis where jurisdiction gets murky.”

Mainville, who has worked with Indigenous communities on the cannabis file for more than four years, says she sees the move by Seven Leaf to sell to Indigenous retailers operating without provincial approval as a sign of some of the failures of the legal system. She says she hopes this is something that will be looked at in the upcoming three-year review of the Cannabis Act.

“Seven Leaf [getting licensed] was definitely seen as sort of a progressive step by an entity to achieve Health Canada licensing as well as Akwesasne licensing. So I think that they were proof that you could do both. Unfortunately, we’re seeing proof otherwise because they’re not really successfully engaging in selling to provincial distributors, which is unfortunate.”

“I think that should be a red flag for Canada that they have to do more for First Nations because this was the Health Canada success story and this is proof that Health Canada has to do a lot more for Indigenous communities.”

Representatives from the Mohawk Council of Akwesasne, Health Canada, or the Ontario Ministry of the Attorney General were unavailable for comment as of press time. More on this story from StratCann in the coming weeks.