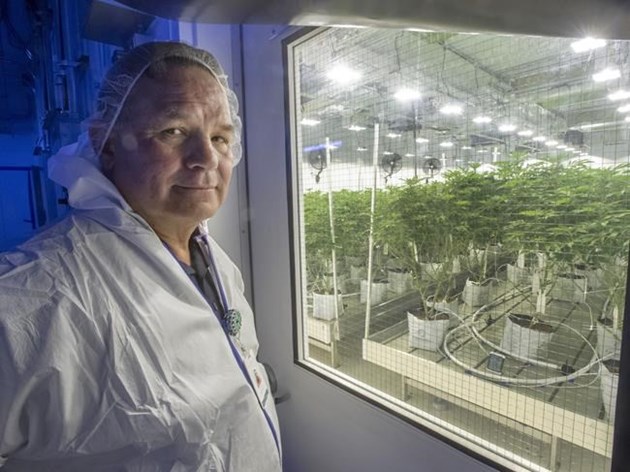 AKWESASNE, Ont. — Lewis Mitchell, a former police chief on the Mohawk territory of Akwesasne, chuckled when asked if he thought he would have trouble finding customers when his first batch of cannabis is ready for sale around summertime.

“No, not at all,” the president of Seven Leaf said at his company’s production facility along the St. Lawrence River, about 130 kilometres southwest of Montreal. They just won’t be in his own community, at least not for now.

It has been six months since the federal Liberal government legalized marijuana in Canada, leaving it up to the provinces to manage sale and distribution. First Nations people have jumped in on the action, but reserve politics and jurisdictional issues have complicated legalization in Indigenous communities.

Akwesasne is a glaring example.

The Mohawk territory is located within the borders of Ontario, Quebec and New York State. Quebec created a provincial retail monopoly for cannabis and isn’t issuing licenses to non-state actors. Ontario, meanwhile, capped its retail licenses at 25 and distributed them through a lottery system. And recreational use of the drug remains illegal in New York.

Since legalization in Canada last October, unlicensed smoke shops selling cannabis have sprouted up in Indigenous communities around the Montreal area. In Akwesasne, the Mohawk police force has raided stores judged illegal by the band council. In Kanesatake, a Mohawk community north of Montreal, Grand Chief Serge Simon has told media he is powerless to stop illicit shops from opening.

The Akwesasne band council would like to begin licensing its own retail stores, but Grand Chief Abram Benedict said he’s still trying to figure out how to ensure the product sold is safe and from a legal source.

“I will say the biggest challenge for issuing licenses is the supply chain,” he said in an interview Monday. “We haven’t solidified where our licensed retailers will get their supply.”

Mitchell, a youthful looking 62, is president and part owner of Seven Leaf, which he says is the first and only cannabis company in Canada wholly owned by Indigenous people and licensed by the federal health agency. The company, he says, is committed to operating according to federal law.

Part of his 7,560-square-metre factory is licensed to grow, while the other section is still under construction. When the whole facility is up and running, he says he’ll be able to employ up to 120 people and produce 12,000 kilograms of cannabis per year. But for now, he won’t be able to sell a single gram to his own people without risking his license.

“We can only sell our products to other licensed sellers and producers,” he said, and none of them are located in Akwesasne. He is hoping to sell his initial harvest to provincial agencies in Quebec and Ontario and other licensed buyers.

Down the road from Mitchell’s factory is Green Chief Naturals, owned by 39-year-old Heath Day. He sells tobacco products and CBD — the non-intoxicating extract of the marijuana plant. He’s waiting for the band council’s blessing before selling the common form of cannabis with THC — the constituent of pot that offers the high.

“That’s the rule of law on our territory,” Day said. “I will abide by it so I don’t get raided. I want to have a positive working relationship with council and the community.”

Benedict said council will likely issue interim licenses to retail stores on the territory in the next few months, but negotiations with the federal government are ongoing, and the supply issue has not been settled.

“We need the federal government to recognize our licensing authority,” he said. Until then, retailers on the territory can’t purchase cannabis from producers licensed by Health Canada.

Another sticking point during talks with federal officials is taxes, Benedict explained. When Mitchell sells his first batch of cannabis, he said he’ll pay one dollar per gram — approximately 10 per cent of the retail price — to the federal government.

“What we’re saying is, if the federal government is collecting a fee, we want a percentage of that fee,” Benedict said. “Or we can collect that fee on (Ottawa’s) behalf and ensure a portion is remitted to the feds, and there is a portion that sees a larger community benefit.”

A third wrinkle complicating the cannabis industry on Indigenous territories is the internal divisions within the communities. “The stigma of cannabis is still strong here,” Mitchell said.

Part of the job of opening a cannabis company on a First Nations territory is getting members of the community on board, he said — especially the elders.

“We had to educate our council,” Mitchell said. “We had community meetings, we brought people here. We did a lot to educate about safety and our reporting requirements.”

Mitchell, who retired in 2008 after 10 years as chief of Akwesasne’s police force, said several other Indigenous communities have visited his facility, looking to emulate what he’s achieved.

“We are proud we are creating jobs for our community and we are proud to bring this model to other First Nations,” he said. “We have to do this right.”

For Day, the delay in selling cannabis has been a blessing, he said, because it allowed seniors in the community to get used to his business. At first, elders were hesitant to try his CBD products, but they have come around.

“Slowly but surely the elders have been coming in, and now we have a seniors’ discount,” he said, proud of his marketing ingenuity. “It’s on Saturday and Monday. But, actually, if you come in and you’re a senior, it’s pretty much every day.”