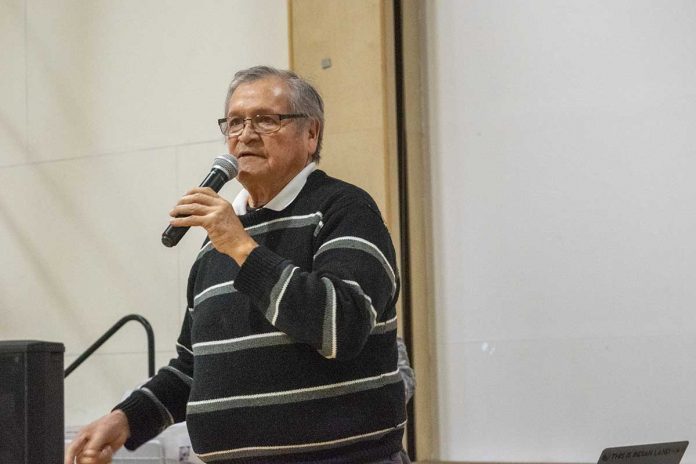 From https://www.manitoulin.ca link to article by Warren Schlote -February 5, 2020

AUNDECK OMNI KANING – First Nation cannabis producers and retailers may find themselves on much surer footing as cannabis trading on traditional lands gains a strong defence through sections 25 and 35 of the ‘Constitution Act, 1982,’ according to the man who literally wrote those sections in the constitution.

“We’ve always run our own businesses, we’ve always traded all sorts of goods,” he said. “We’ve never had to have licences for our businesses before.”

Mr. Riley began his keynote address by sharing how he became involved in the constitution in the first place.

He was still chief of the National Indian Brotherhood and was working extensively with land claims. This gave him a thorough understanding about the existing rights of Indigenous peoples in Canada.

However, many of those rights were not formally recognized in federal documents and policies. Mr. Riley thus began to organize an effort to entrench those rights in the constitution at a national level.

Part of his journey involved speaking with parliaments in Canada, Australia and England. As part of the British lobbying effort, he opened an office there.

As Canada’s constitution began to take shape, Mr. Riley’s efforts only grew stronger. Constitutional negotiator and future prime minister Jean Chretien made a deal with Mr. Riley to close his English office in exchange for including treaty rights in the constitution.

Mr. Riley then worked as a principal negotiator and helped to author the wording that ultimately became part of the act.

Despite the constitutional changes, Mr. Riley said there were many lasting problems stemming from the Indian Act, first enacted in 1876, that ensured the federal government would hold the majority of control over First Nations. This was a racist act from an extremely racist prime minister, said Mr. Riley.

By consulting the clauses he helped include within the Constitution Act, Mr. Riley said First Nations could begin to take more control over their local economies. If First Nations vote to secede from the Indian Act, as several have discussed in recent years, having cannabis stories that pay licencing fees or other taxes to band councils could help bolster a reserve’s economy.

Next to speak was Tom Keefer, editor of Dispensing Freedom magazine. He is non-Indigenous but has been politically involved on First Nations issues since the 2006 Grand River land dispute in Six Nations of the Grand River.

He noted that the Cannabis Act, although sometimes seen as an affirmation of the public’s right to cannabis as medicine, in some ways can be seen as “Prohibition 2.0” because it sets up legal consequences for people who are involved with a plant he called harmless. He added that Indigenous peoples were not properly consulted on the Cannabis Act.

The problem, he says, is that Indigenous relations in Canada are within federal jurisdiction while all recreational cannabis is governed by the provinces.

“The provinces, for their part, claim their laws apply on reserve. This is a bold move,” he said.

Because of the Indian Act restrictions, no band councils have the authority to enact their own policies about cannabis unless they are not in conflict with the Cannabis Act.

The main issues related to cannabis today, according to Mr. Keefer, include the numerous raids against dispensaries, the racist Indian Act, the lack of consultations on recent legislation changes, violations of United Nations Declaration on the Rights of Indigenous Peoples and treaty rights, and a lack of a recognition of Native medicine or the on-reserve economy.

He noted that Seven Leaf in Akwesasne became the first Indigenous cannabis producer to be licenced by Health Canada, but they cannot sell their products to their own people through on-reserve stores.

Mr. Keefer also said some band councils have passed bylaws to make their reserves cannabis-free zones, which could be ruled as unconstitutional.

“The argument is that we don’t need new laws, we already have laws about how to control medicines,” he said. “Ultimately, the issue isn’t cannabis. … It’s the sovereign right for you to govern your own economy on your own terms.”

The economic benefits for reserves can be massive. Mr. Keefer cited some First Nations with multiple outlets can do more than $100,000 per day in cannabis sales. He said one particular store on a particularly busy day did $120,000 of business alone. It’s likely that a significant portion of that income would be reinvested in the community.

“That might lead to a whole lot of other issues you’d need to talk about, but poverty won’t be one of them,” he said.

Stacy Amikwabi was the third and final speaker and he shared some of his experiences navigating the legal system and trying to uncover information about the Amikwa people. He talked about how treaties must include co-existence of settlers and Indigenous peoples, but “we’ve never had that from day one,” he said.

Mr. Amikwabi’s experience is centred around his time spent in band administration, which began as lands manager for Henvey Inlet First Nation.

There followed a question-and-answer period for the three speakers. To the question of how those in the cannabis industry can build solidarity in the face of raids and discouragement, Mr. Keefer said he expected the connections to build naturally, especially with meetings between those charged while they work together to find a way forward.

Mr. Riley reaffirmed his commitment to helping those charged with violating cannabis regulations, and said he would be happy to be an expert witness if required in a legal proceeding.

These meetings with Mr. Riley are circulating to other First Nations in the coming weeks. Wahta and Cape Croker were on the list for the coming weekends, and there is a meeting of the newly formed North Shore Anishinabek Cannabis Association in Nipissing First Nation on February 6. This happens to be the same location as a planned rally about the Anishinabek Nation Governance Agreement.

Following the talk, those involved in the First Nations cannabis industry were welcome to receive a signed certificate from Mr. Riley stating that their operation is protected under sections 25 and 35 of the Constitution Act.

One of those receiving a certificate was Matt Esquimaux, owner of Buddies Smoke Shop in Aundeck Omni Kaning. He was the one who organized the day’s event.

“I wanted to put it on to learn and get a better hold on sections 35 and 25, and so we wouldn’t get the wool pulled over our eyes,” said Mr. Esquimaux, who has been running his dispensary for six months.

He said he was happy with the event although the turnout was a little smaller than he had hoped, but said he was confident those in attendance would take the knowledge and pass it along to those who could make use of it.