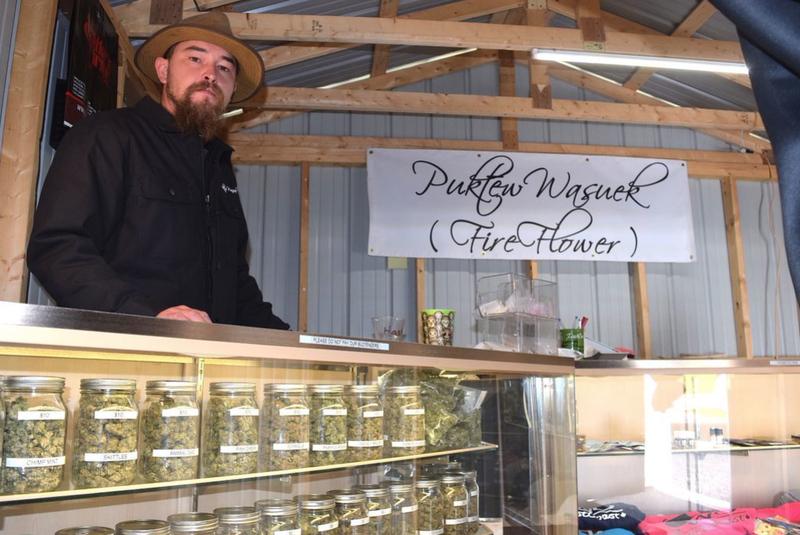 From trurodaily.com link to article by Harry Sullivan, Oct 24th 2019

MILLBROOK, N.S. — Recent RCMP spot checks conducted in Millbrook, according to one shop owner, were set up specifically to target non-natives who are purchasing cannabis products on the reserve.

“They’re telling the non-natives to stop and they’re searching their cars and stuff and they tell the native customers to just go,” Robert Wilmot of the WPuktew Wasuek (Fire Flower) operation on Coach Road, said recently.

“It’s racial discrimination to tell the natives to just go and everybody else, you want their IDs, you want to search their vehicles, you want to know where they were at.”

Wilmot operates one of approximately 10 unauthorized cannabis shops set up by individuals in Millbrook. But he said he believes his location was the only one specifically targeted between during the Thanksgiving weekend and the days following when the RCMP conducted spot checks at both ends of Coach Road to pull over customers leaving his shop. And he is “disgusted” by the fact that it is having a negative impact on his business and his Indigenous rights.

Although marijuana was legalized in Canada in October 2018, the only legal way to purchase cannabis products in Nova Scotia is through Health Canada with a medical marijuana card and at specific NSLC locations.

Wilmot said native reserves were supposed to have a year to establish their own rules governing the sale of cannabis products, but nothing has happened.

“We have no provincial laws. They gave us a year to make our bylaws on it. I didn’t have any bylaws so I opened a store, right?”

Millbrook Chief Robert Gloade had not responded to a request for comment as of Wednesday. However, he previously expressed disapproval over the cannabis shops being operated without an agreement in place with the province.

“There is no treaty right protecting them in regards to selling, growing or distribution of cannabis whatsoever,” Gloade said, in a previous news article.

“Our treaty rights basically focus around hunting and gathering, not growing and distribution,” he said.
But Gloade also indicated the following in a recent Facebook post:

“My Cannabis position
“I and or council for Millbrook did NOT give the RCMP any authorization or direction to deal with the Cannabis retailers. I am not against this as many have accused me of. For the past four years I have been encouraging my council to look at developing a communal base operation of which hasn’t been done yet. Personally I would support this being a band operation but if that’s not the direction we take then retailers should be set up (and) run properly that help to benefit others. We need to develop a cannabis strategy moving forward as a community. This discussion with council continues and this is how I feel.

“Yes Millbrook is a investor in www.zenabis.com for a community benefit as a licensed grower.”

Wilmot, however, adamantly disagrees with Gloade’s assessment of his treaty rights.

“It doesn’t cover the sale of marijuana (specifically) but it covers the sale of any other thing that I have the ability to sell,” he said.

“It says fish, fowls and feathers or any other thing they may have for disposing of. Well, I have marijuana right now, I have sheds right now, I have woodworking right now. Cannabis is just one of the products I have in the store to sell.

Wilmot said he has a facility in another province in which he grows all his own products and he uses proceeds from his sales to donate to his own community and others.

And he is adamant he will continue to exercise his Indigenous rights to keep operating.

“Everybody is sitting there like a bunch of sheeple. They don’t know what is going on. They’d rather sit here and lose their rights than be like, ‘wait a minute, I can actually make money by just going out and doing this stuff for my community and my family.’ Yes, you can make a moderate livelihood off of our land, because this is our land. Every bit of it is our land.

“That’s why we always say, the lease is over.”

Wilmot said he does use the proceeds of his cannabis sales for community good and has donated thousands of dollars to various groups, while providing weekly food baskets to local individuals since he opened his shop.

“I’m trying to feed not only my community but my family as well. I’m not just taking all this right here and putting it in my pocket, I’m taking it and spreading it out through my community. And, not just to Millbrook, to my surrounding community.”

Provincial RCMP spokesperson Cpl. Lisa Croteau did not respond specifically to questions about how the RCMP are conducting its spot checks in Millbrook. However, she did provide statistics for recent operations on the reserve.

Between Oct. 11-16, the following were among a total of 28 charges and six warnings issued by Millbrook RCMP: