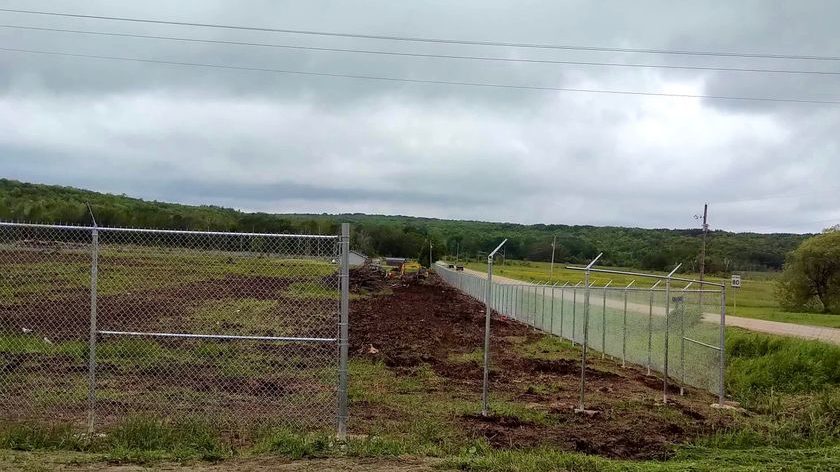 From owensoundsuntimes.com link to article by Scott Dunn, June 25th 2019

Neyaashiinigmiing band members will be gathering to protest at the site of a proposed marijuana plantation on the reserve this week, where preparations have already begun.

Workers are building a large fence around a field bounded by Boundary Road and Port Elgin Road, on land band members understand is leased from a band member for an outdoor marijuana-growing operation.

Band member Crystal Solomon said Tuesday in an interview that people with concerns will be gathering there Wednesday and Thursday. On Friday they’ll attend the band council meeting where there will be a call for a stop-work order.

Solomon King started a change.org petition calling for a community vote on the project, which had 133 signatures Tuesday. He raised concerns on Facebook about a lack of consultation before the project proceeded and about environmental issues.

It will be raised at the June 28 band council meeting, according to his Facebook post on “Cape Croker community chat room”.

Crystal Solomon’s mother, Debbie Solomon, lives across from the proposed marijuana plantation site with two young grandchildren. She’s concerned if the project proceeds it would threaten the health of her family and harm the community.

The project “is really upsetting me,” she said in an interview Tuesday. She attended a community meeting Sunday where she learned more about the project and concerns about it.

She said she understands the marijuana will be grown in pots and will be irrigated with water brought in for that purpose. She’s concerned about possible drainage from the site affecting her drinking water supply, which is a nearby spring.

“We have enough problems with the water trying to keep it clean.”

She’s also concerned about the smell and of pollen from what she understands would be 19,500 plants growing so close, and about the prevailing wind which would carry that into the community.

The proposed cannabis site is right at the entrance to the community, which is known for its natural beauty, she said. “But that’s just destroyed it because when you’re coming to the entrance, you’re going to see that big fence and it does look like a prison.”

“I don’t want to sound selfish but because I’m just right across the road from it so I’m thinking about my family. Like I’m being threatened, my family’s being threatened by this. And they don’t’ care . . . .”

Crystal Solomon is a member of the Chippewas of Nawash Unceded First Nation at Neyaashiinigmiing, north of Wiarton, but she lives at neighbouring Saugeen First Nation, near Southampton.

She tried to get Cape Croker Police to stop the work but was unsuccessful.

She’s also concerned that jurisdictional ambiguity over who oversees marijuana cultivation on reserves has caught band council off-guard without any regulations in place.

Chief Greg Nadjiwon acknowledged in an interview last week the community has no regulations in place concerning marijuana growing and it’s an “elephant in the room” whether the band council can reject marijuana projects.

Wiisag has been working with Health Canada to meet its requirements, Nadjiwon said last week. Wiisag did not appear Tuesday on a federal list of those granted licences to grow cannabis.

Wiisag founder Jake Linklater declined to comment last week about his project until after a news release is ready, likely this week, he said.

Questions emailed to him Tuesday weren’t answered by day’s end.

Debbie Solomon said she was never told a marijuana field was proposed across the road. She said she thinks the proponents should have consulted the community first.

“I don’t like the way they came in and just did this. They did it. I came home from work one day and here I see them ripping up all the trees, and then they were plowing the ground. Like they were destroying the environment.”