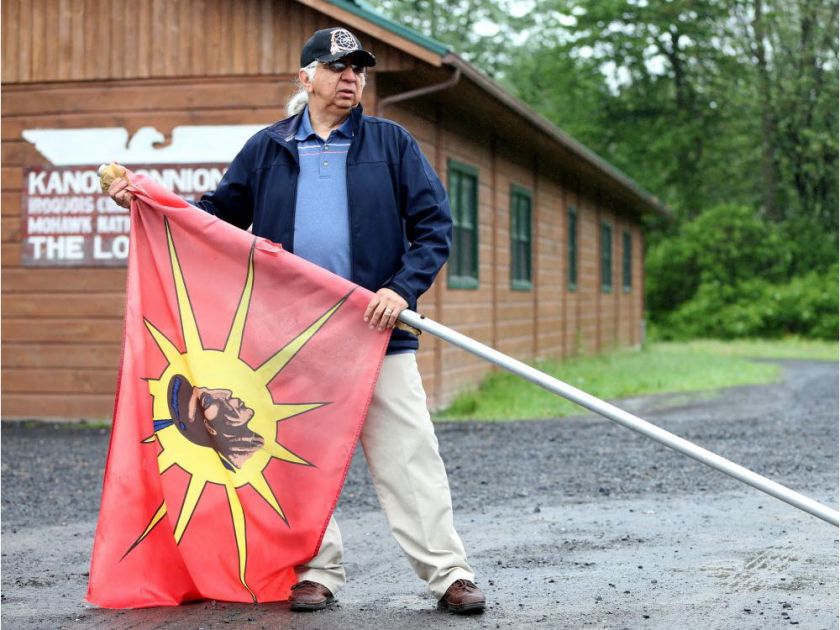 “It is not in our culture, it is not in our traditions to use something like (cannabis). We call those substances mind-changers,” says Kenneth Deer, a member of the Kahnawake Longhouse. “We’re fine with the use of cannabis for medicinal purposes, but not recreational.” Deer is a Mohawk traditionalist and views the elected band council as merely an extension of the federal government and doesn’t vote in local elections.

By Christopher Curtis, Montreal Gazette, November 3, 2018
Is it truly the will of the people to see cannabis grown and sold on Mohawk land?

That’s what Kenneth Deer wants to know as the Mohawk Council of Kahnawake is on the verge of tabling a law to regulate the sale of pot on the South Shore territory.

Deer is an elder, a member of the Iroquois Longhouse and one of the chief opponents of legal recreational cannabis in Kahnawake.

“It is not in our culture, it is not in our traditions to use something like (cannabis),” Deer told the Montreal Gazette. “We call those substances mind-changers. We’re fine with the use of cannabis for medicinal purposes, but not recreational.”

Deer is a Mohawk traditionalist and views the elected band council as merely an extension of the federal government and doesn’t vote in local elections. Instead, he subscribes to the Longhouse — which is, at once, a political system and a form of spirituality.

One of those spiritual tenets, according to tradition, is for members not to use substances that affect the way a person thinks or acts. In other words, no drugs and no alcohol.

The band council has consulted with the community on the cannabis question and it put the matter to a vote last month. In the end, 54 per cent of the 425 residents who cast a ballot in the referendum voted in favour of legalization.

After unveiling the results, the Mohawk council announced it would table a law, during a Nov. 13 community meeting, to legalize and regulate the growth and sale of cannabis on-reserve.

Council published a draft of the Cannabis Control Law in August and presented it to the community in September. In Kahnawake, band members can amend or even strike down laws during public meetings with the band council.

That night, they decided the issue of cannabis should be put to a referendum.

But even after last month’s referendum, Deer says he wonders if 425 voters represents a large enough percentage of the community.

“Can you really say that’s the will of the people?” Deer said. “When you consider there were probably 5,000 people of voting age and you consider the vote was hardly unanimous, it makes you wonder.”

One of the arguments from Kahnawake’s band council is that — with a national, legal, recreational cannabis market now open — prohibition on the territory would be nearly impossible to enforce.

As it stands, without its own cannabis law, the territory is struggling to enforce prohibition. Greenleaf, a local dispensary, has been shut down four times by the Kahnawake Peacekeepers.

Moving forward, a spokesperson for the band council says an ideal version of legal cannabis has to be one with true oversight, quality control standards and a rigorous health and safety program.

“If we’re going to move forward with legalization, we’re going to get it right,” said Joe Delaronde, a spokesperson for the band council. “We want to understand what the will of the community is here and if it’s right for us.”

Looming over this debate is a potential multi-million dollar partnership between the community and Canopy Growth — Canada’s largest manufacturer of legal cannabis.

In September, the two signed a non-binding agreement that could see the company build a greenhouse and packaging plant in Kahnawake. All told, it could create 50 local jobs and revenue sharing with the community.

But Deer’s concern is these types of partnerships hinder the community’s independence. He says that having a strong local economy means relying on local consumers and not people from neighbouring communities.

“Otherwise, we will never truly be independent.”