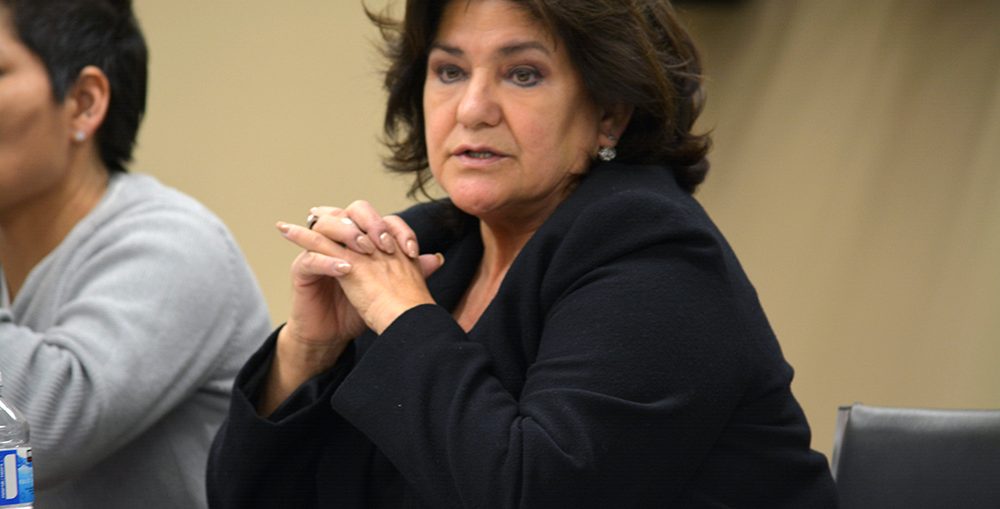 With expectations that the federal government will legalize recreational marijuana use by 2018, the Mohawk Council of Kahnawake is exploring the idea of entering the industry and is now looking to consult the community on the issue.

“We just want you to know what we are looking at some possibilities either for council to look at potential partnerships for both medical marijuana and recreational,” said council chief Rhonda Kirby at Tuesday’s winter community meeting.

With around 60 people in attendance for the meeting, which took place at the Golden Age Club, council made the announcement that they’ll be consulting the community on the issue over the next few months.

“We are talking about having a large community meeting to talk about the issue, we just want to make sure that people are informed of what exactly is going on,” said Kirby.

Suzanne Jackson, an attorney with council’s legal department, gave a presentation on the legal issues with the subject, highlighting the Canadian Liberal government’s 2016 final report on the Task Force on Cannabis Legalization and Regulation.

“The one thing that seems to be certain is that it will be legalized in 2018, so what that means for Kahnawake is that it will be decided what situation will be here, but on the outside it will be legal to go and buy and use marijuana, as long as you’re buying it from the proper vendor and using it responsibly,” said Jackson. “It’s important for Kahnawake to develop regulations ideally before or in parallel with Canada, again, it will be up to your community after consultation and education and discussion as to what those regulations look like, there’s a lot of things to be discussed and addressed, but it would be important to have a regulation of some sort.”

Last year, grand chief Joe Norton met with Gerald Bear of the Tobique First Nation in New Brunswick and Ernie Blackman, a grower at River Rock in Denver, Colorado. The meeting was brought up at the last community meeting in the fall, with little discussion on the topic.

Norton said Tuesday that Tobique approached Kahnawake about partnering on a dispensary.

“They’re in the process of renovating a building to open a dispensary. They have not applied for a license and said they’re not going to. They’re going to develop their own law and rules, and regulations. They’re asking Kahnawake to participate in it,” he said. “I don’t see us ever lifting the zero tolerance, but at the same time, we have to be able to make our own amendments and say zero tolerance, except the production of cannabis or for medical purposes.”

Community member Jeremiah Johnson said he hopes the community takes the route of creating its own legislation to regulate both medical and recreational cannabis.

“Creating our own law and our own regulations and not abiding by what garbage Quebec or Canada puts out because Quebec and Canada with this industry, they’re trying to take it for themselves. They’re making it a corporate industry, taking it away from communities and citizens who could be involved in the industry and that’s not the right way to do it,” said Johnson.

“Legislation does need to happen here in the community. A lot of people are saying there’s zero tolerance, but we have to deal with the reality that is around us,” said Deer.

The announcement regarding consultation on medical cannabis wasn’t the only agenda item at Tuesday’s community meeting.

In addition to land allotments, updates were provided on membership by portfolio chief Arlene Jacobs.

In the recent weeks, council published open letters to the community regarding non-Natives residing in the territory in contravention of the Kahnawake Membership Law .

The letter was published in last week’s Eastern Door and was posted in mailboxes this week.

“Over a two week period, we tried to cover as many people as we can, as many people to be aware of what we’re trying to do and what we’re doing,” said Jacobs. “Of course this is all from community members that asked us what we are doing, how come these people are still here? What’s the plan? Well, these are our plans.”

Letters were also issued to landlords that they believe are renting to non-Native people.

“We sent out three so far, and there’s another maybe 3-4 to go out,” said Jacobs. “Just to reassure the community that we will continue to apply pressure to those who are here illegally.”

Since 2010, Kahsennenhawe Sky-Deer said almost half of the non-Natives who were residing in the community have left.

“The community has been asking us to be vigilant, as I’ve reported, when we started the letter campaign in 2010, there was about 100 non-Indigenous persons residing in the community and as of today, seven years later, there’s about half,” she said. “There’s always going to be the hold outs and people who don’t want to leave and their families are supporting them, but the broader community in my opinion, the community is still pretty strong and adamant about this that Kahnawake is for Onkwehón:we.”

For the final agenda item for the meeting, Norton wanted to make it clear that council has no involvement in a proposed casino by private business owners in the community.

“We’re not a part of this. We have not taken a position at this point in time collectively,” he said. “We didn’t give our blessing to any of that.”

Some community members expressed frustration with the proposal considering there’s been three referendums on the subject where the majority voted no to a casino.

“The people said no, no, no. That’s it,” said Paul Deer. “It’s the peoples’ voice. This petition and survey means nothing. It’s the referendum that counts.”

Norton agreed that the petition the proponents have been circulating for signatures of support is not an acceptable form of community consent.

“We already had our kick at the can, so to speak, and the can’s kicked back at us,” he said. “But at this moment, we’ve never talked about an individual or individuals coming forth in having for what people consider to be a private casino. If this opens up the discussion that if there’s 850 or 1000 names or whatever, then that’s an expression from 1000 people, so you have to look at in terms of saying, there’s that many people out there who want to review this matter again.”

Another community member asked gaming portfolio chief Gina Deer why there seems to be a rush by council to amend the gaming law with new regulations for land-base gaming.

“We would like to do that because there’s not only a casino project, there’s other projects that come to council. Since I’ve been there, we’ve had different proposals on things that are land-based whether it be having tablets or different kinds of things other than what we have right now,” she said.