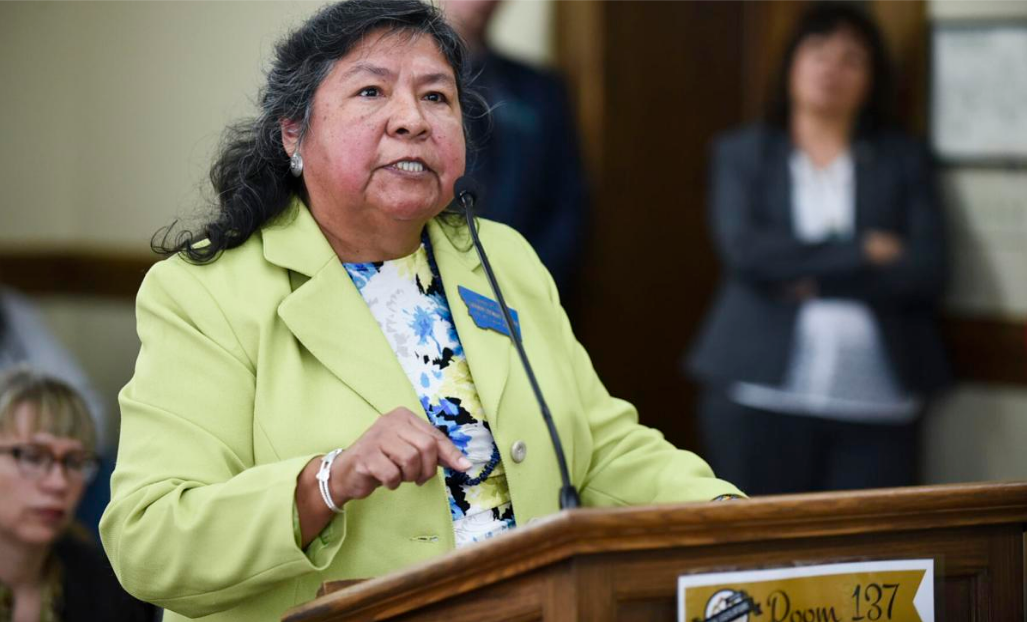 From Montana Standard by Paul Hamby & Rob Chaney May 27 2021

The Montana Legislature has ended this year with several bills making their way to Gov. Greg Gianforte that will have a lasting effect in the state’s Indian Country.

Throughout the 2021 legislative session, 12 Indigenous people took their seats in the Montana House and Senate. The Montana American Indian Caucus this year was the largest since at least 1989, when the Legislature started collecting cultural heritage information from its members.

After several contentious months, a marijuana implementation bill passed through the Legislature in late April. Along with detailing how much cannabis each resident can grow either as a business license holder or private citizen, House Bill 701 also stipulates for tribes where they can sell marijuana. Tribes can receive a business license to run a dispensary within 150 miles of the outside boundary of a reservation, according to the bill.

The Crow Tribe passed an ordinance in early April laying the foundation for the tribe to enter the cannabis industry, with all sales of marijuana products being made through the Apsáalooke government and taxed at 7% for each retail sale.

Crow Chairman Frank White Clay previously told The Gazette the ordinance is subject to change as the tribe determines best practices in growing, processing and selling cannabis. White Clay said the approval of the ordinances is both an effort to diversify the Crow economy, and an exercise of the tribe’s sovereignty.

Thor Hoyte, legal counsel for the Crow Tribe, said Thursday the tribe has been in consistent contact with the governor’s office throughout the legislative process. Although the tribe will parallel the state in rolling out its marijuana sales policy over the next several months to avoid any legal confusion, both Hoyte and White Clay have said the Apsáalooke Nation will run its cannabis operations independent of what legislators have passed or tabled during the session in regards to marijuana.

“They [the State Legislature] can’t say anything about it, but to that end, and this is the important thing, we are actively talking with the State of Montana. And everybody’s excited about the historic relationship that may come from it,” Hoyte said.

To date, the Crow are the only tribe to inform the Governor’s Office of Indian Affairs that they have created their own cannabis ordinance.

“Any bill improving Native American voting rights or getting to the polls was shot down,” Running Wolf said. “That’s how it seemed the whole national agenda was — voter suppression for people of color and minority races.”

House Bill 530, which went to the governor’s desk last week, contained an amendment that could impact groups like Western Native Vote that played a role gathering voter registrations and ballots in Montana’s Indian Country during the latest election. While granting the secretary of state the authority to put rules in place regarding election security, the bill also prohibits anyone from collecting or delivering any ballots for “pecuniary benefit.”

The amendment placing a $100 penalty on any ballot unlawfully ordered, collected or delivered followed the Senate postponing a bill earlier in the month that would limit ballot collection to family members, an election official or U.S. Postal Service employee.

“Ballot collection is a lifeline to democracy for many Native voters,” Running Wolf said in a message this week posted to social media.

At the end of March, the Montana State News Bureau reported the House shot down a bill that would have required the county to maintain a satellite office with reservations that they overlap with a month before Election Day. Gov. Greg Gianforte has already signed into law two bills that end allowing Montanans to register and vote on the same day, and require a government-issued ID at the polls, or two other forms of identification. The Montana Democratic Party has challenged both bills in state district court, alleging they violate the voting rights of the elderly, the disabled and Native Americans.

The Gazette reported in 2020 that a decade-long study of more than 7 million ballots cast in Montana elections showed just one confirmed case of illegal voting. Although no official voting data exists for Native American voters in Montana, about 68,000 Indigenous people live in the state.

On the positive side, bills to assist Native American language preservation and immersive teaching found support. Running Wolf added that shifting Indian language programs from the state Department of Commerce to the Office of Public Instruction, along with funding for new lesson media, successfully made it through to the governor’s desk. And a $500,000 fund to assist rural communities in certifying and retaining local school teachers got signed.

Representatives from the Confederated Salish and Kootenai Tribes declined to comment on their legislative goals or outcomes.

Native Americans make up just under 7% of Montana’s population, but they still make up about a quarter of all missing people reported in the state. Gov. Gianforte has signed into law several bills that expand the statewide effort to combat the crisis of missing and murdered Indigenous people. Senate Bill 4, sponsored by Montana American Indian Caucus member Sen. Jason Small, R-Busby, will extend the state’s Missing and Murdered Indigenous Persons Task Force by another two years.

Caucus member Rep. Sharon Stewart Peregoy, D-Crow Agency, also had two of her bills signed by the governor. One will create a commission under the Department of Justice focusing on educating police and lawmakers about missing Indigenous persons and recommending policies that would best help the state bring the crisis to an end. The second extends funding for both the MMIP Task Force, and the Looping in Native Communities grant program for another two years.

The LINC grant’s establishment in 2019 led to Blackfeet Community College launching a website that allows for the safe and fast reporting of a missing person to Blackfeet law enforcement.