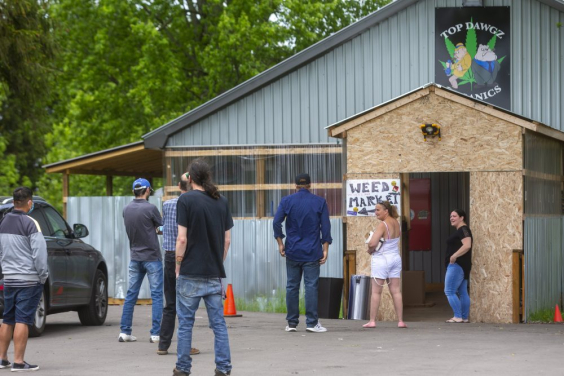 Police raided a half-dozen black market cannabis dispensaries on the outskirts of an Indigenous community southwest of London Thursday.

Members of the OPP joint forces cannabis enforcement team searched six illegal pot shops on Carriage Road in Middlesex Centre at the request of officials from the Oneida of the Thames First Nation, police said.

Some of unsanctioned businesses were operating on Oneida-owned land, while others had set up shop on adjacent property, police said.

“There were six people that have been arrested and property seized,” Middlesex OPP Const. Kevin Howe said.  “The investigation is ongoing.”

Oneida Chief Jessica Hill said there’s been an ongoing battle with the operators of the Carriage Road pot shops.

“In the last year, we’ve asked them four times to remove themselves and they haven’t,” Hill said.

“Those individuals have no right to be on (the land), no authority. They don’t pay rent.”

Oneida bought the parcel of land from a farmer in 1998 with plans to use it for the community, Hill said.

“It’s in the name of a corporation and it’s held in trust,” she said of the land, which is officially part of Middlesex Centre.

Illegal pot shops once numbered near 1,000 in Ontario, but police have cracked down on the brick-and-mortar operations since Canada legalized recreational cannabis in 2018.

Only licensed retailers and the government-run delivery service, the Ontario Cannabis Store, are permitted to sell marijuana in the province, but some Indigenous leaders argue that they should have the right to regulate the sale and distribution of cannabis in their communities.

Nearly a dozen pot shops have operated on Oneida for years, attracting customers from the London region.

All of the Oneida dispensaries have been shuttered after the territory was closed to non-residents on March 30 amid the COVID-19 pandemic, Hill said.