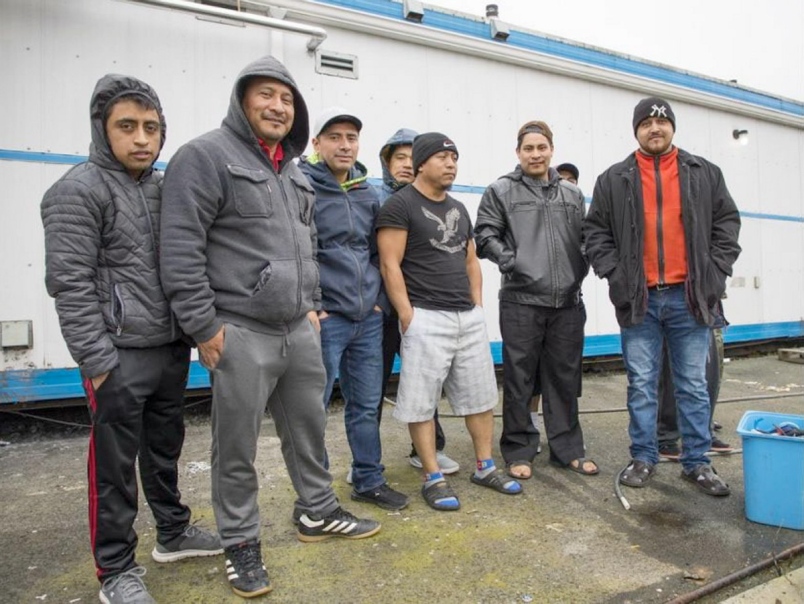 From timescolonist.com link to article by Nick Eagland, March 7th 2020

B.C. greenhouse workers suddenly laid off by cannabis giant Canopy Growth are getting ready to fly home to their families in Guatemala.

The Smith Falls, Ont., firm announced Wednesday that it was closing its facilities in Delta and Aldergrove and would be laying off 500 workers. Many of them are new immigrants from India and workers brought here from Guatemala under the federal Temporary Foreign Worker Program, which lets companies hire foreign workers to fill temporary labour and skill shortages. article continues below

On Thursday afternoon, a single greenhouse worker stood outside the firm’s work camp in Delta — a row of portables surrounded by dozens of bicycles — washing his shoes in a blue bucket under the rain. Soon after, about a dozen colleagues joined him outside to talk about what the sudden job losses meant to them. They appeared in high spirits, but hundreds more who had just lost their jobs weren’t there to speak for themselves.

Sergio Baran, a greenhouse worker, said he heard estimates that 90 workers from his home country of Guatemala had lost their jobs at the Delta facility and another 160 at Aldergrove. They expect the company to give them severance cheques soon and tickets home next week, he said.

Elias Salomon, who came on a six-year permit, but will return to Guatemala after just two years, had mixed feelings about the layoffs.

“For now, I think all is over right? I’m waiting for a new opportunity in Canada. Maybe I have, maybe not yet,” he said. “I’m feeling a little bit sad, but I am excited to be back at home. It’s been a long time here. I miss the family, too.”

Salomon said he had been supporting his wife and two children back home. He said Canopy has been looking after the workers and keeping them well-informed about the process. But while he and his colleagues expect to be on planes this week, many would be grateful for the opportunity to instead continue working on another B.C. farm, he said.

“It’s a business decision, right?” he said. “But it’s over, so, right now, we are waiting for the flights and we will go home soon.”

The 1.3-million-square-foot Aldergrove facility and another 1.7 million sq. ft. of space in Delta make up two-thirds of Canopy’s total licensed operations. The firm spent $400 million in early 2018 to buy the B.C. greenhouses and hired hundreds of workers. It had hoped for the “B.C. Tweed” facilities, as they were known, to generate the bulk of supply to its processing headquarters in Ontario.

But when Postmedia News visited Canopy’s Aldergrove facility a year ago, it appeared underused. Sources at the time said the greenhouse was struggling to scale up and battling growing issues.

Ingrid Mendez and Byron Cruz, of the Watari Counselling & Support Services Society, met the Canopy workers last week and heard many heartbreaking stories. They said Canopy’s Guatemalan workers were earning B.C.’s minimum wage — $13.85 per hour — which they would send home to their families.

“They [companies] prefer to recruit people with kids and families because they know that they’re more vulnerable and then they will not complain, right?” Cruz said. “Most of these workers have families and they are First Nations in Guatemala. They are Indigenous people. That’s what I know.”

A large group just came to work for Canopy in December — many of them women — after taking on huge debts to pay for bus tickets, paperwork and fees charged by recruiting agencies back home, Cruz and Mendez said. They said workers who had been at the greenhouses for years are most worried about the effect of the job losses on those new arrivals.

“Their dreams and hopes of coming here — they went into debt to make sure they could achieve them — now they’re gone,” Mendez said.

Watari was meeting the workers again on Friday, accompanied by Sanctuary Health, to discuss the workers’ access to food and housing over the next month, as well as how they can obtain employment insurance.

The government is supposed to make sure employers use the program to respond only to real labour shortages, but concerns have been raised repeatedly over the years about migrant workers being tied to employers who have abused them by making them work long hours, cutting their paycheques with arbitrary fees and offering poor living conditions.

In 2017, according to government figures, about 35,000 employers obtained permission to bring in temporary workers for 97,000 positions.

Vancouver-based lawyer Susanna Quail said most low-wage migrant workers tend to come to Canada on closed work permits, meaning they can work only for a single employer. When layoffs happen, it can be months before they’re able to start working again. “If someone is working on a closed work permit, which is the norm, then they will either have to leave the country or they will have to find a new employer who will go through the whole process again to get approval to hire them and then get a work permit to hire them,” Quail said.

She said the length of time it takes to obtain the new work permit can vary widely, but is typically between four to six months. Those who have worked enough hours may be eligible for EI, but don’t qualify for social assistance.

— With files from The Canadian Press