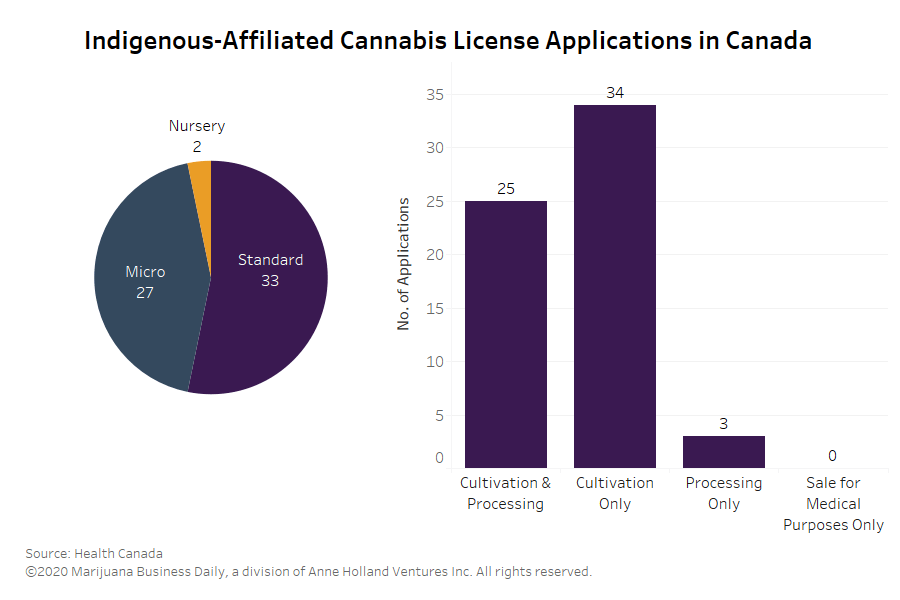 Just over a dozen Indigenous-affiliated cannabis companies have wound their way through Health Canada’s marijuana licensing process in the past 18 months, according to new data provided to Marijuana Business Daily.

And none of the latest licensees are located on a reserve.In total, 19 Indigenous-affiliated cannabis companies make up a little over 4% of the 459 authorized federal cannabis licenses issued by Health Canada.

To assist Indigenous communities’ participation in the production and manufacturing of cannabis, the federal health department has operated the Indigenous Navigator service since November 2017.

One of the ways it does that is by dedicating licensing professionals to work with applicants.

But almost two years into legalization, Health Canada said there is currently only one federal cannabis license holder on a reserve.

Why is First Nations participation in the newly regulated industry relatively low?

Entrepreneurs contacted by MJBizDaily had high praise for the people involved with Health Canada’s Navigator Service but said the program has limitations.

“This is not a slight at the people who work there, but they’re constrained by policy,” said Marc Storms, chief marketing officer for Nations Cannabis in British Columbia.

Nations Cannabis, an Indigenous-affiliated, late-stage applicant in Burns Lake, Northern British Columbia, aims to have its production facility up and running in the fall.

“When Health Canada doesn’t put any lubrication in the system, they’re going to be hitting all the barriers that non-Aboriginal companies won’t hit, especially in terms of capital,” he said.

Aside from the 19 Indigenous-affiliated licensees, 72 new site applications with Indigenous affiliations are in various stages of the federal licensing process.

Wes Sam, co-founder and executive chair of Nations Cannabis, is advocating for more Indigenous participation in the legal cannabis industry.

“While we have been able to work through many barriers, I believe they are systemic. Whether accessing investment or developing business partnerships with non-Indigenous groups, you’re looked at differently,” Sam said.

“As an Indigenous person, representing an Indigenous company, even potential investors don’t always look at you seriously, as a capable entrepreneur no matter how successful we’ve been. That’s a significant barrier for many Indigenous business, and in particular, in the cannabis industry.

“It’s been baked into the system. But we hope that as our company fully develops and becomes successful, that may be part of breaking down some of those barriers and perceptions.”

To help Indigenous-affiliated cannabis businesses, the entrepreneurs say the federal government should:

Nations Cannabis said it will be looking to partner with interested First Nations or entrepreneurs throughout Canada.

“We want to do what other companies had said they could do for us, but couldn’t do,” Sam said.

“The difficulties of being a First Nation band, organization or entrepreneur, the hurdles are really huge. First Nations groups traditionally have a harder time getting capital – not just cannabis, but cannabis is one of the most (difficult) businesses I’ve found to raise capital for.”

Nations Cannabis has applied for a standard license with processing.

But for others, micro-class licenses, which have lower entry entry barriers compared to standard licenses, could provide an opening into the regulated market.

Only one of the 19 Indigenous-affiliated cannabis companies was a micro business as of early August, while 17 are standard and one is for medical-only sales.

That is going to change in the coming months.

Of the 62 applicants currently in the federal government’s queue who have self-identified as Indigenous, almost half – or 27 – are micro-cultivators.

“It’s a mountain that we’re overcoming, and that’s a great thing about our company. We are getting our investment,” Sam said.

“Every hurdle that’s thrown at us we’ll overcome. We’re going to show that you can actually do this as a First Nation private company.”