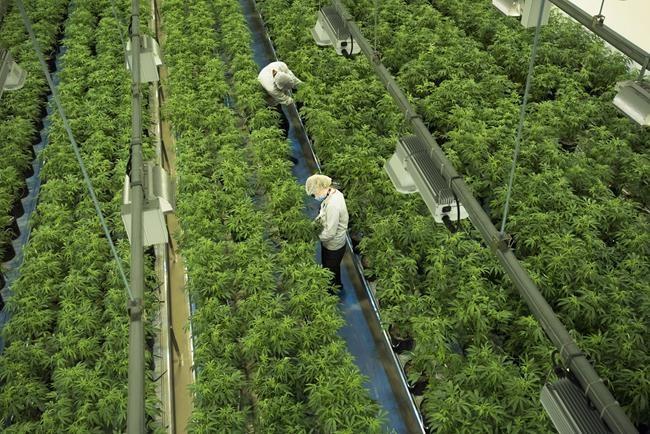 TORONTO — Canada’s legalization of cannabis in October 2018 was supposed to signify the beginning of a new and prosperous industry in a country with a long-held pot culture.

But just over a year later, the heady days of the pot stock bubble have given way to a harsh reality where share prices are in the tank, supply issues bedevil the system and politicians are laying blame at each others’ feet.

Stocks of several large Canadian cannabis producers fell between 15 and 28 per cent since Monday, which began a week of bad financial news from several of the industry’s heavyweights.

Canopy Growth Corp., which missed revenue estimates and said it was increasingly unlikely to meet revenue targets for its fourth quarter, lost 26.9 per cent of its value over five days, including 67 cents or three per cent on Friday.

As with Canopy, Aurora’s net sales — announced late Thursday — were below expectations, coming in at $75.2 million rather than a consensus estimate of $93 million.

“The sales shortfall was driven mainly by a 33 per cent decline in recreational sales due to slowing demand from the provinces as they work through high inventory levels,” wrote Desjardins Securities analyst John Chu.

Desjardins cut its stock price estimate for Aurora to $6.50, from $14, but continued its “buy” rating.

Several executives and stock analysts say they still see a bright future for the sector in the long term, but they admit the Canadian market hasn’t grown as much as expected since recreational pot became legal last year.

BMO Capital Markets analysts concluded after Canopy’s Thursday conference call that the company made progress in re-aligning its product mix but added demand “is not meaningful enough” to address its losses and inventory level.

They noted that, while other licensed producers are downsizing their production capacity, Canopy harvested an additional 40,000 kilograms during the three months ended Sept. 30 in the second quarter of Canopy’s fiscal 2020.

Canopy, for its part, blames a lack of retail stores in Ontario — home to 40 per cent of the Canadian population —  as a major cause for its slow growth and said it looks forward to the province adding locations to meet market demand.

“At the risk of oversimplifying, the inability of the Ontario government to license retail stores, right off the bat, has resulted in half of the expected market in Canada simply not existing,” Canopy CEO Mark Zekulin said Thursday.

Jenessa Crognali, speaking for Ontario’s attorney general, deflected the blamed towards the federal government, saying it rushed to legalize recreational cannabis without ensuring there was enough supply to meet demand.

“As a result of the federal government’s failure, the market grappled with a federal supply shortage that only began to show signs of improvement in the past few months,” Crognali wrote in an email to The Canadian Press.

“Now that the supply shortage is resolved, our government is working . . . to return to our original plan to allocate retail store licences based on market demand.”

A spokeswoman for Minister of Border Security and Organized Crime Reduction Bill Blair said the federal government is committed to working with provinces and territories on the cannabis file.

“While some provinces are making considerable progress in offering adults a safer alternative to the illegal market, others still have work to do establish their wholesale and retail distribution systems and better protect Canadians,” said Marie-Emmanuelle Cadieux, in an email.

The BMO analysts said they think Canopy will need significant revenue growth to reduce operational losses, given how much it needs to spend on new recreational products in Canada and its expansion in the United States.

“While Ontario is expected to accelerate store openings at some point, it is difficult to envision that enough stores could open over the next year to fully absorb the industry’s increasing production output (including outdoor harvests),” Chen and Sklar concluded.

They lowered BMO’s target price for Canopy stock to $25, from $35, but rated it as a market performer.

Zekulin, who announced in August his intention to leave after a new chief executive is selected, also said Canopy can weather the storm because its large-scale Canadian construction projects are coming to a close, reducing expenses.

He said Canopy will also continue to build facilities across the United States with a focus on products with cannabidiol (CBD), which is similar to cannabis but without THC, which the U.S. federal government still bans.

A recent sectorial analysis from Cowen Research estimates the total U.S. addressable market, representing combined sales from all producers and products, at about US$85 billion. It estimates Canada’s market is worth C$12 billion.