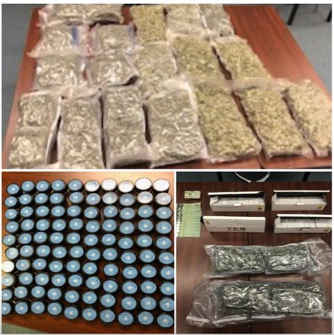 At approximately 10:42 PM, a vessel was observed traveling on the St. Lawrence River with no navigation equipment displayed. The vessel attended a private landing on Kawehno:ke (Cornwall Island) and briefly met with a pick-up truck where police observed an exchange take place.

As the vessel departed, the landing police attempted a conduct a stop and activated the emergency equipment. The vessel failed to stop for police and continued to a second landing on Kawehno:ke (Cornwall Island) where the operator of the vessel fled on foot.

Police conducted a search of the vessel and seized the following items:

The Akwesasne Mohawk Police also seized the vessel as it was used in the commission of the offense. Police estimated the total seizure at $61,000.