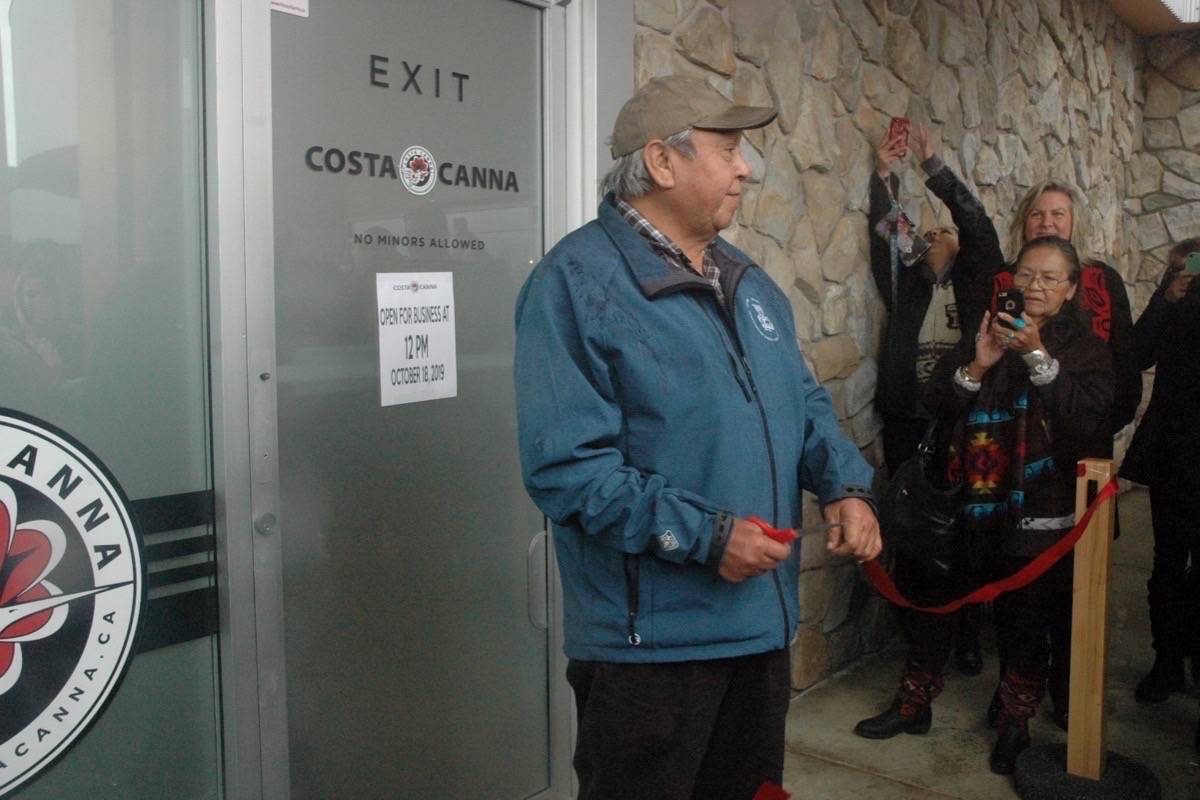 From cowichanvalleycitizen.com link to article by ROBERT BARRON Oct. 23, 2019

The line up at Costa Canna, the Cowichan Valley’s first retail marijuana store, was long at its grand opening on Oct. 18.

People braved heavy rain showers to listen to speeches and watch traditional ceremonies and dances outside in the lead up to the official opening of the store, located in Duncan Mall, at noon on Friday.

“We’re open for business,” said William Seymour, chief of Cowichan Tribes, which heads the partnership that owns Costa Canna, as he cut the ribbon at the front of the store.

Joel Anderson, one of Costa Canna’s first customers, said the establishment of the Valley’s first cannabis store took too long.

“We’ve been waiting for a legal marijuana dispensary to be set up in the area for more than a year [since Canada legalized recreational pot] and that is way too long,” he said as he bought cannabis products from “bud”tender Lena Smith.

Costa Canna was originally scheduled to open on April 15, but security checks and other licensing processes by the province took longer than anticipated.

Cowichan Tribes plans to use the revenue that Costa Canna generates to build homes for its members and help deal with other social issues, including drug and alcohol addictions.

Seymour said the First Nation is waiting to see how much revenue the store will make before its board of directors makes any final decisions as to exactly where and how it wants to direct its new financial resources.

In the meantime, he said the store has literature on addictions available for customers to read.

“We’re also working with Island Health to provide an addictions counsellor at the store that we hope will be here full time,” Seymour said.

Costa Canna is a retail model that Cowichan Tribes hopes to expand beyond the region to the rest of Vancouver Island, British Columbia and Canada.

But Phil Floucault, president of Costa Canna, said the company wants to get its first store up and running efficiently before opening up other locations, including at least one more that is planned for the Valley.

“Our biggest challenge right now is to make sure our model works at this store,” he said at the grand opening.

“It’s all brand new right now and we’re really just getting used to all the processes at the Duncan Mall location. When we’re ready, we’ll look at other options locally and abroad.”

Costa Canna has also received a licence from the province to operate a second pot shop in the Cowichan Commons, and the Municipality of North Cowichan gave the green light for the store to open at a council meeting on Sept. 4.

But Seymour said the future of that location will depend on whether North Cowichan allows a marijuana retail store that would be operated by the Liquor Distribution Branch to open nearby.

The application from the LDB to open a store in another section of Cowichan Commons has already received third reading from the municipality.

“If the government store is approved, we will pull out,” Seymour said.

“We can’t compete with a government store because they control the supply and set the prices and we have to abide by them. If [North Cowichan’s] council approves that store, we will look for another location, probably within our own territory.”