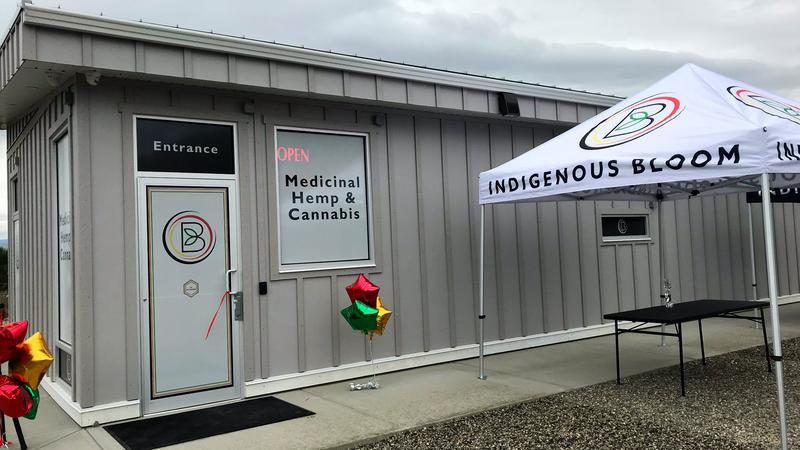 From country95.fm link to article by Dylana Kneeshaw, September 27, 2019

Indigenous Bloom is now open for business, and joins a growing number of retail pot shops throughout the Kamloops area.

Co-owner Ted Gottfriedson says he hopes the venture will not only provide some safe options for cannabis users, but boost the employment opportunities on Tk’emlps te Secwepemc lands.

“Hopefully we’ll do the community well here. Our native people, and all the other people who need medicine and stuff. So thank you.”

The store is now the second cannabis business to operate within Tk’emlps jurisdiction. Similar to Pinnacle Access, which opened earlier this year on the reserve, Chief Rosanne Casimir says the business licensing and regulations for stores on band land follows federal legislation, not provincial.

“These are our lands, and we definitely take the lead in that jurisdictional area. We create our own laws, and we have them posted not only on our website, but through the First Nations Gazette as well,” explains Casimir. “We have that in place not only to protect ourselves but also businesses that are established and opening up on our reserve.”

Along with cannabis, Indigenous Bloom brings on-reserve job opportunities. The store will employ 11 people to start, with the potential for more hires to follow.

“They don’t have to go down into some different area of town to find their medicine or the products that they want. So that’s one of the things is you have a safe access site.”

Indigenous Bloom isn’t the first of its name. The Tk’emlps store marks the ninth store on reserves in BC under the franchise.

Attending today’s grand opening was Chief Robert Gladstone of the Shxwh:y Village, who has been part of Indigenous Bloom’s expansion. He says there are plans for about 40 stores in the near future.

“The good word will spread (to other communities), they’ll see what is going on here, what it’s done for the people, what it’s done in my village, and we hope that others will say, ‘hey I want to be a part of that’.”

With many bands leading the way for Indigenous-run cannabis stores, it’s expected many First Nations people will benefit from the industry.

“So we’re in this together. The Indian people always talk about a canoe. We’re in a canoe together, we’re going on a journey and it’s a good one,” says Gladstone. “Economic growth, development, and hope. Bottom line is it comes down to hope.”