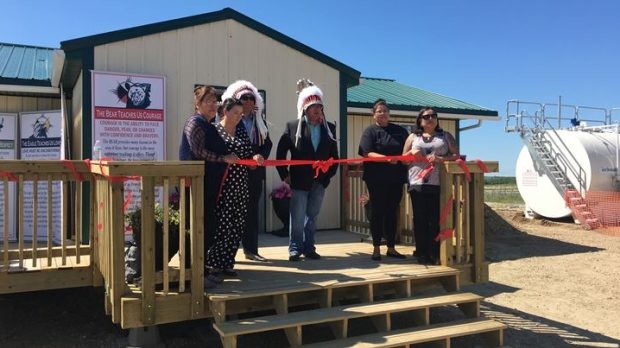 ‘We have jurisdiction over our lands’: Pheasant Rump opens cannabis shop despite lack of provincial permit

A grand-opening was held on Monday for a new marijuana dispensary on Pheasant Rump Nakota Nation.

“We received a lot of support and guidance from our elders that this was an area that we needed to occupy to exert our jurisdiction,” Chief Ira McArthur said.

The province issued 51 permits before the legalization of marijuana last October. Pheasant Rump was not on the list, and does not have a provincial permit.

Despite encouragement from the Government of Saskatchewan to follow provincial law, Muscowpetung First Nation opened its own marijuana dispensary in November.

“I think it was oversight on the part of the federal government as well as the provincial government in not specifically addressing the First Nation interest in this industry,” McArthur. “Not only economically and employment wise but also on the health side of it too. So I think that the province really didn’t take that into consideration.”

The Federation of Sovereign Indigenous Nations stressed the importance of jurisdiction on reserve land.

“We have jurisdiction over our lands and our territories, and for Pheasant Rump to assert theirs by developing their own cannabis act under the direction of their elders and the support of their community, I think that’s going to go a long way to improve not only health outcomes for First Nations people but also for us economically as well,” Vice Chief of the FSIN, David Pratt, said.

The new dispensary, Buds and Blossoms Cannabis Co., is owned and operated by the nation in Southeast Saskatchewan, north of Kisby near Highway 13. Once fully operational it will employ up to 16 people.

The first nation held a membership vote on May 16, and the “Traditional Medicinal Plants Act” was approved and adopted by Chief and council on June 19.

Chief McArthur says the dispensary will bring more economic prosperity to the first nation, and make cannabis more accessible and safe for the community. One of the elders uses cannabis to help with his aches and pains.

“When you’re 68 years old, you’re going to need a little help,” local Elder Fred McArthur said. “You don’t need all the pharmaceutical stuff; I don’t do any pills at all, ever. And I’m health.”

According to Chief McArthur, they are interested in growing their own product, and building a brand new 25,000 square foot facility by next summer.