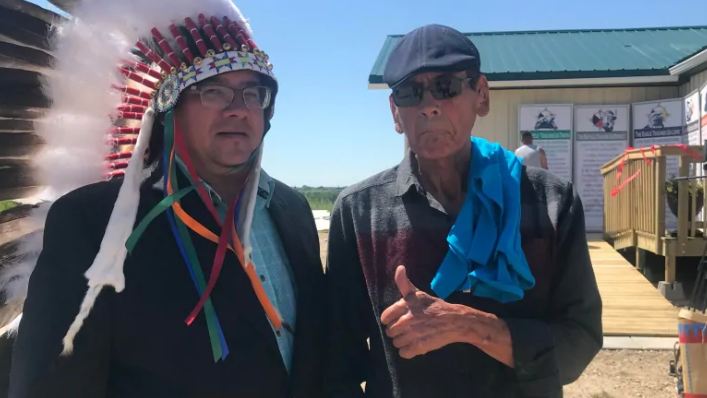 From CBC.ca link to article by Adam Hunter, July 3rd 2019

Its first nine customers were elders.

The dispensary is operated by the First Nation, located 170 kilometres southeast of Regina. It does have a license from the First Nation but is not among the provincially regulated cannabis stores.

Chief Ira McArthur said the store was born after the community developed its own rules and regulations around the use of recreational cannabis.

McArthur said “the federal government really dropped the ball” regarding its guidance on how legalized cannabis would affect First Nations’ communities. He said the community discussed the issue with its elders and created the Traditional Medicinal Plants Act, which outlines who can use cannabis and where.

“Our elders had identified that there was a gap that we needed to take steps to be able to address any concerns that may arise out of the legalization of cannabis.”

From there, Pheasant Rump leadership decided to open a dispensary.

“We’ve really been focused on the health aspects of it. We’re trying to provide a lot of good quality products to people at a reasonable price,” McArthur said.

Under provincial regulations, the Saskatchewan Liquor and Gaming Authority, which oversees cannabis sales, says First Nations must have a provincial licence to open a pot store legally.

In November, Muscowpetung First Nation opened a cannabis store, which resulted in a warning letter from SLGA.

The First Nation filed a claim in court seeking a declaration that it has an inherent right to self-government and that it has the power to sell and regulate cannabis under the constitutional rights of Indigenous people in Canada.

The band also wanted a declaration that provincial and federal cannabis laws do not apply on its land.

In November, FSIN Vice Chief David Pratt said that, as per Treaty 4, Muscowpetung had every right to open their cannabis shop, regardless of who was granted permits by the provincial government.

“Our position has always been historically — and continues to be — that First Nation communities have jurisdiction over their lands and territories, plain and simple,” Pratt said.

McArthur said the provincial regulations do not apply to the First Nation.

“As far as I’m concerned, the provincial government or the whole concept of the province doesn’t even exist.”

McArthur said he has had a “really good conversation” with an official in the Ministry of Justice and has had “a number of discussions with the RCMP.”

“I haven’t outwardly been told not to do it. We’ve not received any indication from them that we were not to open or that they were going to raid us or anything like that.”

The government of Saskatchewan provided a statement to CBC on Wednesday saying it is not in communication with any “unauthorized” dispensaries.

“We will assess the effectiveness of the initial allocation of retail store permits 12-18 months after legalization and will consider the allocation of additional permits after that review.”

McArthur said on opening day about 150 people visited the store.

“My office hasn’t received any complaints from any of our members. We put work in our community to make sure that  we weren’t going out of our way to offend anybody,” he said.

He encouraged other First Nations to enact legislation governing cannabis use on their own territory.

“Fill that gap within our communities to ensure the safety and well-being of our children, young people and non users.”