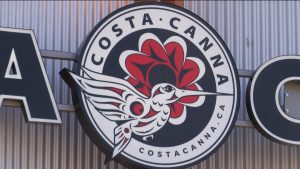 The nation is looking to open one of the island’s first legal cannabis stores, Costa Canna, by mid-April.

But because of the Nation’s history with substance abuse and addiction, it’s been a difficult decision to come to.

“For Cowichan Tribes to agree to move in the direction with this store and selling cannabis, it was a hard decision for us to make of the fact because we know that’s the issue out there,” said Cowichan Tribes Chief William Seymour.

“That’s why we need to ensure health and wellness is a part of this, so this problem doesn’t get worse.”

Unlike other pot shops, Costa Canna will focus on cannabis for healing ailments and illnesses, all while taking illegal drugs off the Cowichan reserve.

“Going through the provincial regulations gives us the opportunity to ensure that those types of activities don’t take place,” said Chief Seymour.

“You know you would think with legalization, cannabis purchases, for the most part, would be legal,” said Tom Gierasimczuk, Vice President of Business Development with Resonance Consultancy, which conducted the first ever post-legalization Canadian study.

“It actually turns out that only less than a third of actually Canadian cannabis users purchase their cannabis legally.”
But Costa Canna wouldn’t be just a stand-alone local retail store in Duncan, Cowichan Tribes sights are set much higher than that.

“The bigger picture was always to expand,” said Dick.

Cowichan Tribes is hoping this store can be a template to other Indigenous Nations across the province, and maybe even across Canada.

“We can bring a turnkey opportunity to their reserves by providing economic stability, employment, and opportunities for them to grow,” said Dick.

Using the Costa Canna template, the joint venture promises other nations could get a store up and running in four months. The company would streamline the licensing process and put up the initial investment, as well as the oversee the initial development before handing things over to the franchise owner.

With big plans, big revenue is also expected, and all parties want to see it put to good use.

“Any community across Canada all have the same issues like housing and water,” said Chief Seymour.

“So I think going in this direction is going to help a lot of communities out.”

And some island eyes are already on them.

“Other Chiefs I’ve spoken to on the island here, have an interest of coming to see this at the grand opening,” said Chief Seymour.

“They want to know what we’re doing.”

The grand opening of the Duncan location is tentatively set for mid-April after the provincial licencing officially comes through.