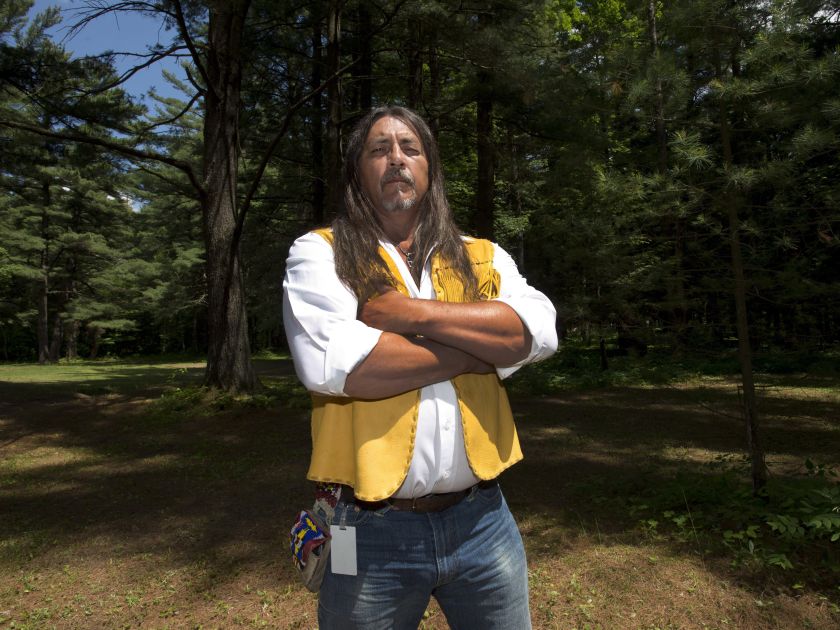 The Kanesatake band council could swear in armed peace officers to prevent the rise of illegal cannabis dispensaries on the Mohawk territory.

From MONTREAL GAZETTE link to article by CHRISTOPHER CURTIS August 18, 2018

The Kanesatake band council could start swearing in its own peace officers to prevent the rise of illegal cannabis dispensaries on the North Shore Mohawk territory.

Grand Chief Serge Simon told the Montreal Gazette on Friday that he’s willing to commission armed officers and authorize them to patrol Kanesatake.

He said the action may seem drastic, but he recently found out band members have been selling weed out of cigarette shacks and other buildings on the territory.

“I hate to do it that way, but what choice do I have?” Simon said. “We’re going to lose control of this thing if we don’t nip it in the bud.”

Simon said he worries that without the threat of enforcement, outside organized crime groups will partner with a small class of Mohawk merchants and operate within the territory. That partnership, he said, could give rise to a local criminal element that has largely been fading from Kanesatake since the 1990s.

“I know some band members on this territory still have connections to the Hells Angels and organized crime. I don’t want them operating businesses here because I really don’t trust them.”

The idea of forming a local police force isn’t without controversy. The last time Mohawk police patrolled the territory, Chief James Gabriel believed the department was corrupt and tried to root it out by force. Gabriel enlisted 60 peacekeepers from other reserves in Quebec and took over the Mohawk police station during a raid in 2004.

Just as his crew seized control of the station, locals surrounded it and used a bulldozer to box in the peacekeepers. It was during the ensuing standoff that Gabriel’s house was burned down.

“I look at the mistakes James Gabriel made in the past, and I don’t want to repeat them,” Simon said.

Given Kanesatake’s status as a sovereign Mohawk territory, however, there’s a sense from local entrepreneurs that they have the right to sell cannabis without outside interference.

With a national legal cannabis market just months away, Mohawk territories in Ontario have seen an explosion of unregulated dispensaries. The Tyendinaga territory, just west of Kingston, went from having a handful of weed shops to about 40 in the past year. Sources in the territory say many pull in over $1 million in sales annually.

Simon attributes this phenomenon to shrinking profit margins in the Indigenous tobacco trade, which has long been dominated by Mohawk territories.

“You used to be able to make $10 or $12 a carton easy,” said Simon, who once owned and operated a smoke shop in Kanesatake. “Now, you’re lucky if you can make $1.50. There’s no money in tobacco, and people see cannabis as the way of the future.”

Clifton Nicholas opened the Smoke Signals dispensary in Kanesatake last April but said he only sells cannabis to patients who have a legitimate medical need. As a Mohawk traditionalist, Nicholas doesn’t recognize council’s authority over the territory.

Members of Mohawk warrior societies and the Iroquois longhouse don’t vote in band council elections; instead, they subscribe to a political system governed by local clan mothers. In practice, this means there are rival governing factions in territories like Kanesatake.

To avoid any politicization of a local police force, Simon said he would create a police commission chaired by members from “sister communities” like Kahnawake and Akwesasne.

News of the tension in Kanesatake comes as its neighbours on the South Shore are creating legislation to grow and sell weed on Mohawk territory. The Kahnawake band council will begin a new round of consultations on the Cannabis Control Law next week.

Under the proposed legislation, a band-appointed commission would license local growers and merchants to sell recreational cannabis on the South Shore territory. Kahnawake council Chief Gina Deer said the idea is to keep cannabis off the black market and under the supervision of local government.

“They are exemplary in their approach to legalization,” said Liberal MP Marc Miller, who consulted with Kahnawake on the legislation. “Whether you agree with their approach or not, they’re engaging with the core issues of legal cannabis. They’re talking about policing, quality control, mental health concerns, use by children; they’re hitting all the right notes.”

Miller plans to meet with Simon and the Kanesatake band council on Aug. 31 to discuss cannabis legislation, but Simon said he wants the community to look at other means of economic development. The band council is working on a partnership with the neighbouring city of Mirabel to create a massive composting program for the region’s farmers. Simon admitted he also sees some potential in medical cannabis.

“As a medicine, cannabis can be a very good thing, if we do it the right way,” he said. “But speaking as a former addict, I worry about what such an influx of cannabis could do to our youth. I’ve been sober almost 25 years, but that’s how I started down the wrong path.”