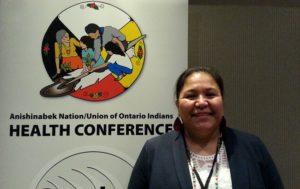 From anishinabeknews.ca link to article by Lynne Brown, Feb 8th 2018

SAULT STE. MARIE—Carol Hopkins brought food-for-thought to the Anishinabek Nation Health Conference by way of thoughtful discussion around the topic of Cannabis (Marijuana). As momentum towards a framework for legalization continues, The Thunderbird Partnership Foundation (TPF) is creating spaces for dialogue and education.

“To talk about the legalization of marijuana, of cannabis, is increasingly important,” shared Hopkins.

Hopkins shared an in depth presentation to over 150 delegates at the Anishinabek Nation Health Conference on Jan. 24.

“We [The Thunderbird Partnership Foundation] have a mandate to help translate the knowledge so that it is usable for First Nations communities,” stated Hopkins during her presentation. “We know there have been announcements in the country by the Prime Minister and the [federal] Minister of Health, Dr. Jane Philpot, about the legalization of marijuana. Our purpose is to try and educate First Nations about how they might prepare for the legalization of cannabis. What are the risks and harms? What are the benefits of cannabinoids, and what are the policy pieces that need to be considered to better prepare for the legalization of marijuana? How can we more fully participate in the conversation around legalization?”

In her presentation, Hopkins shares insight into the some of the latest scientific evidence where cannabis is studied. The use of cannabinoids, which is a derivative from the cannabis plant, has promising research for a myriad of applications under the health umbrella. Hopkins invites communities to consider all of the issues; the pros and the cons and potential questions that might arise.

“As we’re considering the evidence, it’s necessary for First Nation people to consider what is true for their population,” stated Hopkins. “What evidence do we have to validate or dispute what the evidence is saying? The organization we look to for research is the First Nation Information Governance Centre (FNIGC).”

“The RHS has good data around health status, history, trauma, mental health, inter-generational trauma, our use of cannabis, and other substances,” noted Hopkins. “More research is taken into consideration as well that helps us to understand the context and broader picture, including social determinants of health.”

Hopkins stated that issues relating to harms would need to be most significantly addressed around children and youth.

“Cannabinoinds have been proven to be effective for treatment of pain,” explained Hopkins. “The use of cannabinoids could significantly reduce harms in communities which are currently facing issues around the misuse of opioids, lack of access to treatment, palliative care, pain management, and mental health.”

Hopkins shared that the cannabis plant has been sited throughout history of First Nation culture.

“There are Elders and cultural practitioners who speak about the use of cannabis in health and ceremony,” stated Hopkins. “A topical medicine is one of the ways cannabinoids have been used; it is applied on the skin to reduce pain.”

“The traditional ceremonial or medicinal use of cannabis starts with an understanding of the spirit of the medicine,” she said. “When it starts from that place, then there is a different respectful relationship with the plant.”

Carol Hopkins Presentation to the Anishinabek Nation Health Conference 2017, is available on Youtube. There are 8 videos in total.