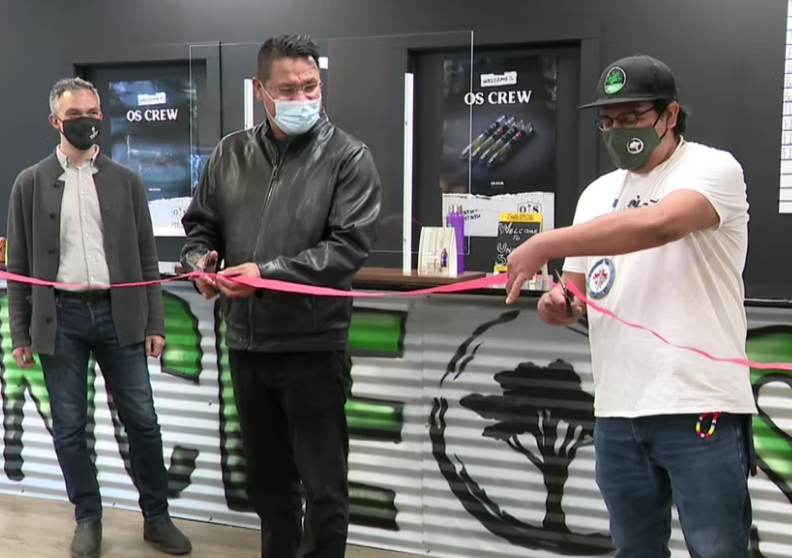 A First Nations man in Winnipeg is making a name for himself in the recreational cannabis business with the launch Uncle Sam’s, the city’s latest cannabis retail space.

“It’s very attainable now to get a licence in Manitoba … if you have your ducks in a row it’s attainable to get. It took us six weeks,” said Josh Giesbrecht during the store’s grand opening Friday.

Giesbrecht, 30, is the owner of Uncle Sam’s Manitoba branch.

The store shares space with his other business venture Exchange PPE, a personal protective equipment storefront launched shortly after the pandemic hit.

In Manitoba, there are a number of First Nations participating in the retail side of the cannabis market whether that is on or off reserve, but Giesbrecht said he may be the first Indigenous person in the province to operate a shop independently.

A spokesperson for Manitoba Liquor and Lotteries, who handles the retail licences, told APTN News they don’t have information on the ethnicity of individual owners nor would they be able to share information about specific cannabis retailers’ ownership structure.

Giesbrecht got his start learning about the business in 2017, and shortly after he developed a CBD business.

That got halted last year when the pandemic made its way to Canada. That’s when he shifted gears to the PPE business.

At the beginning of this year, after researching the licence process, he decided to open his own retail store.

“It’s probably the biggest, I would argue, cultural shift and political shift I’ll see in my lifetime. I look at the product as not only does it have huge medical potential and benefits but it also had huge life quality benefits,” said Giesbrecht.

“You no longer feel like you need to have an excuse to be in a cannabis store. It’s legal to do so. There should be no stigma.”

Uncle Sam’s was originally started in Alberta. There are eight locations in the Edmonton area.

Giesbrecht decided to team up with the retailer to expand store locations in Manitoba and eventually Saskatchewan.

He said he now owns 60 per cent of the company.

Unlike other retailers in the city with their clean and sleek interior designs reminiscent of an Apple Store, Uncle Sam’s brand pays homage to stores pre-legalization.

“It’s a cannabis culture store, and it’s a legal one. I think there’s this unfortunate divide that still exists between the legacy market and the legal market. Often the two feel like they can’t co-exist,” said Giesbrecht.

“This brand is showing, no, it can be done. It can be done legally, regulated, with consistency and testing where all products are safe but it’s still fun.”

Giesbrecht, who is from Roseau River Anishinabe First Nation, said with his new venture it was important to provide job opportunities for Indigenous people in the city.

The majority of his staff are First Nations or Métis.

“As an industry, the cannabis industry, the legal part of it has done a horrible job of having people of colour … actually involved. For me, that’s a big priority because it needs to reflect the reality of what’s actually in our society,” he said.

“We need to have a part of that economic pie.”

Courtney Nepinak is new to the business but ready to learn about the product as one of the stores so-called “Bud Tenders.”

“Just gaining more knowledge about the product,” said Nepinak, who is from Pine Creek First Nation, when asked about what she was looking forward to the most.

Uncle Sam’s joins a handful of other Indigenous-owned companies in the city’s Exchange District.

But the organization supporting businesses in the area hopes to see more.

“There’s a lot of tech companies, creative firms, art groups and things. There’s more participation on those levels, so it’s nice to see that spill out onto the ground floor too,” said David Pensato, executive director of Exchange District Biz.

Giesbrecht plans to open another store in the city’s west end in July.