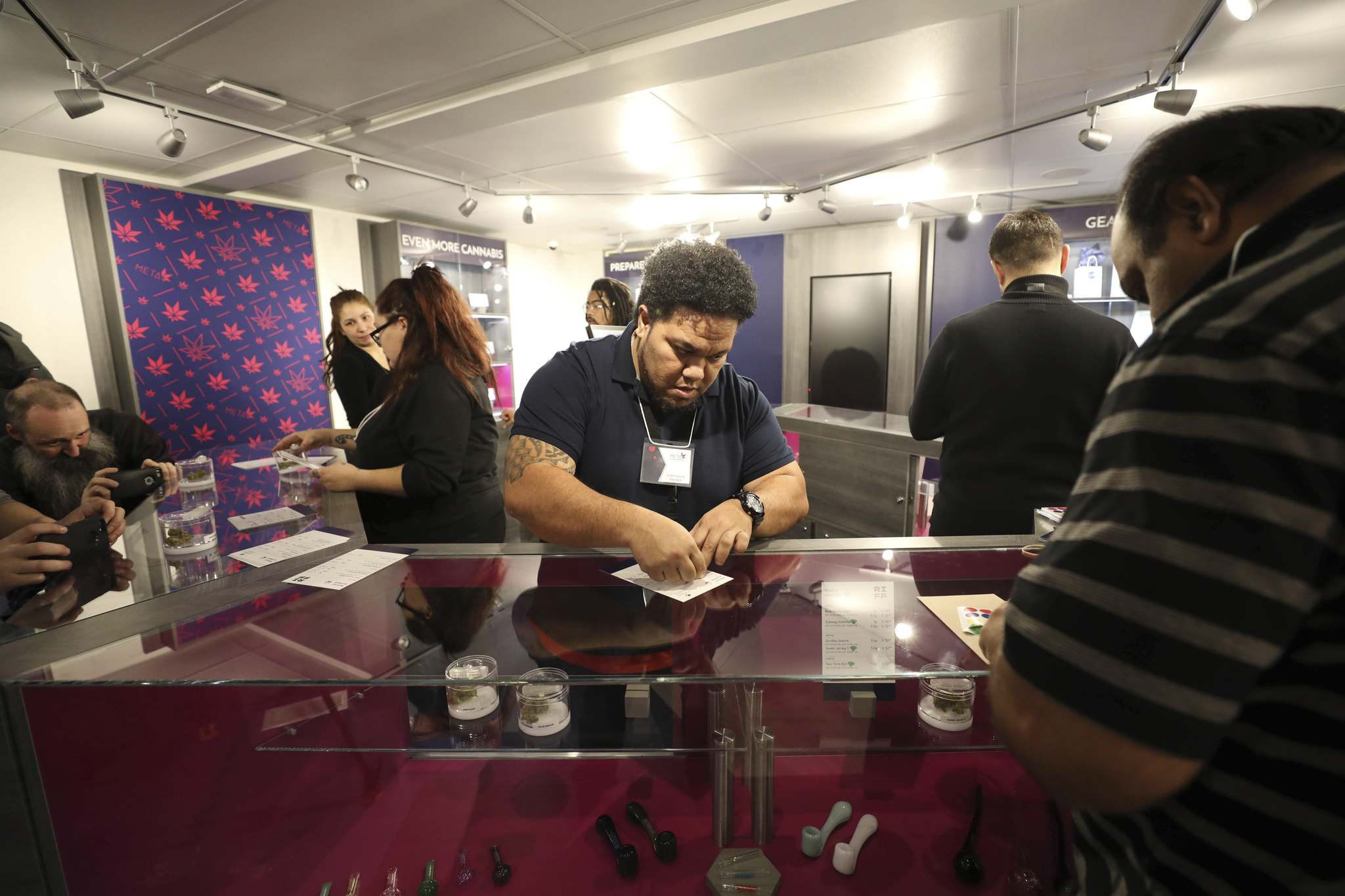 Cannabis outlet, first for an urban reserve in Winnipeg, opens its doors

The first retail pot store on an urban reserve in Winnipeg opened Friday at noon exactly, with jokes about “high noon” and chuckles over the playful street address of the new outlet.

Long Plain Chief Dennis Meeches held a broad green satin ribbon at one end and the chief of its partner Opaskwayak Cree Nation (OCN), Onekanew Christian Sinclair, held the other end so the new store’s manager could snip the ribbon for the grand opening.

“We’d like to welcome Chief Christian Sinclair from OCN and we’d like to thank you very much for the great partnership with National Access Cannabis (NAC). It will do a lot of good for Long Plain First Nation for years to come through employment in a new emerging industry. Everybody is excited about that,” the Long Plain chief said.

The urban reserve outlet is in a trailer with NAC’s large META retail sign printed on a banner in the brand’s navy blue and gray colours.

The location is on Long Plain’s three-acre urban reserve, adjacent to a college and a very busy Petro-Canada gas station. It’s also the proposed location for a future hotel and office complex where Long Plain leaders expect the META store will find a permanent home.

April 20 is an annual day of celebration in the cannabis culture, when activists toke up in public — and before recreational marijuana became legal in Canada this fall, in open defiance of criminal laws against pot use.

The number was “a perfect address for anyone who can read between the lines,” the Opaskwayak chief said to chuckles from a packed audience.

It’s the third First Nations store in the province launched with National Access Cannabis under its retail META brand; the other is at OCN, 530 kilometres northwest of Winnipeg. NAC is partly owned by OCN.

NAC operates five marijuana retail outlets in the province under the META brand.

“We recognize this site as being one of the premier spots in all of Manitoba, being located (on) what we call the largest urban reserve in Canada,” OCN’s Sinclair said Friday.

“Based on the economic success of their initiatives here — their petro fuel station — the same volume of business (will be) replicated at the META location here,” Sinclair predicted.

The opening brings to 15 the number of retail pot stores in Manitoba, including 10 in Winnipeg.

Meanwhile, competitor Delta 9 Cannabis Inc. said Friday it had received conditional approval from the province to open a 16th store in Brandon.

The new store planned for Brandon’s Shoppers Mall is a “superstore,” similar to Delta 9’s superstore in the St. Vital area of Winnipeg.