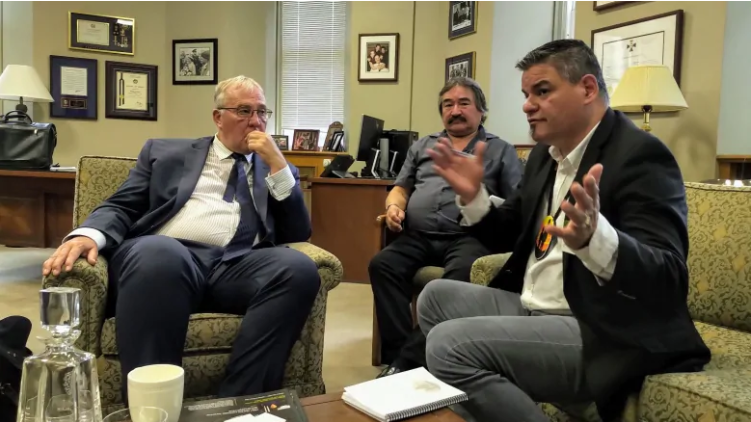 Ottawa initially cut First Nations out of the cannabis regulatory and revenue-sharing regime when it developed the Cannabis Act which gave provincial and territorial governments control over the distribution and retail end, while Health Canada oversees the licensing of commercial production.

Ottawa also splits excise tax revenues 25 per cent to 75 per cent with provincial and territorial governments.

“They left us behind when they started going down that channel,” said Opaskwayak Cree Nation Onekanew (Chief) Christian Sinclair, who has been involved in the discussions.

Sinclair’s First Nation, about 520 kilometres northwest of Winnipeg, bet early on the cannabis industry and is a major investor in National Access Cannabis and its retail chain of Meta Cannabis stories.

Organized Crime Reduction Minister Bill Blair has held several meetings with First Nations leaders — including a teleconference Thursday — exploring the possibility of a cannabis plan which could eventually require a legislative component to give it force.

Isadore Day, CEO of Bimaadzwin, a consulting company that focuses on Indigenous nationhood, said it would mirror the federal, provincial and territorial rules governing the cannabis industry.

“What the First Nation framework is looking to do is have a parallel track,” said Day.

The regulatory regime would be First Nations-controlled — from the licensing to testing to traceability to revenue sharing, said Day, a former regional chief for Ontario.

Blair’s office said in an emailed statement that the federal government will continue to “engage” with Indigenous communities on the cannabis issue on a “nation-to-nation” basis.

The statement said Ottawa is willing to move forward on the issue “bilaterally, if necessary,” if some provinces and territories are reluctant to participate.

Blair has told First Nations leaders at the meetings that the Prime Minister’s Office is engaged on the file.

“We both acknowledge that this is a complicated situation. But there’s no reason why it can’t be solved,” Blair told First Nation leaders during July 16 talks in Ottawa, according to meeting notes provided to CBC News.

“The prime minister has been very clear that he wants this resolved in a nation-to-nation way.”

Day said he knows any potential legislative component to this framework, should it come to fruition, would have to wait until after the federal election this October.

However, he said he hoped to have some form of written commitment before the writ drops. He said discussions are also soon planned with senior officials with Health Canada.

“If you get this on the table with the bureaucracy before the writ drops, you are going to be able to move the file,” he said.

‘I want us to be part of the economy’

The Assembly of First Nations passed three resolutions on cannabis at its annual general assembly in July, one of which called on Ottawa to “acknowledge … First Nations jurisdiction over all aspects of cannabis cultivation, process and retail operations within their territories.”

The resolution also called for the development of a framework with Canada.

While the AFN is not leading the current talks, AFN National Chief Perry Bellegarde’s chief of staff has been party to some discussions.

Several First Nations, like Tyendinaga, Pikwakanagan and Alderville in Ontario, and Kanesatake in Quebec, already have thriving cannabis retail stores operating outside of provincial and federal rules.

Manny Jules, chief commissioner of the First Nations Tax Commission, who is also involved in the talks, said the current situation has put some First Nations governments in a tough spot dealing with he called a “grey market” within their borders.

“You can’t have what is happening right now … I want us to be part of the economy and that requires legislation,” he said.

Sinclair said all First Nations should benefit from the industry. The only way to maximize the potential is through an exclusive sphere of jurisdiction — outside of provincial or territorial control — for First Nations, he said.

He said the framework would also ensure cannabis revenues would stay within First Nations.

“We have all the moving parts and First Nations are already in involved in all parts of the supply chain,” he said.

First Nations should keep between 75 per cent to 100 per cent of the revenues that would go into Ottawa or provincial coffers in the form of excise or commodity taxes from the sale of cannabis on First Nations, said Jules.

Jules said the revenues should be used to create a type of equalization formula.

“What I am suggesting with the excise tax is that this should be used as a First Nation revenue fund so we could be in a position to help communities that don’t have the benefit of being close to an urban centre,” said Jules.

Jules said all federal parties should commit to the creation of a First Nations cannabis framework in their campaign platforms.