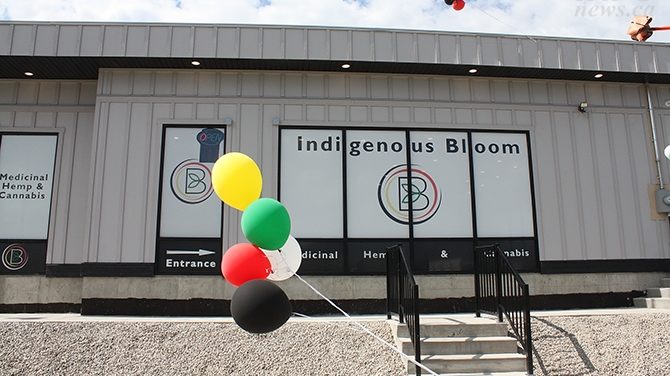 From infotel.ca link to article by Steve Arstad, August 16th 2019

PENTICTON – A second cannabis retail outlet has opened up in the Penticton area in less than a week.

Indigenous Bloom opened their doors in a new building off Green Mountain Road on the Penticton Indian Band yesterday, Aug.14.

Workmen were still working on final construction details Thursday morning and balloons marked the site off Green Mountain Road, on the Okanagan River channel beside the Super Save gas bar.

The store’s manager, who would only identify himself as Mike, said a grand opening would be taking place, probably in a couple of weeks. He would not disclose further details about the operation.

Advertisements on the store’s outside window offer medicinal hemp and cannabis.

Penticton Indian Band Communications Coordinator Dawne Russell said the band is not commenting on the business, which is on locatee land. The band has, however, tried to establish itself as a ‘dry’ community free of alcohol and drugs.

The brand opened a store on First Nations land in Lake Country in January, and has stores in other parts of British Columbia as well.