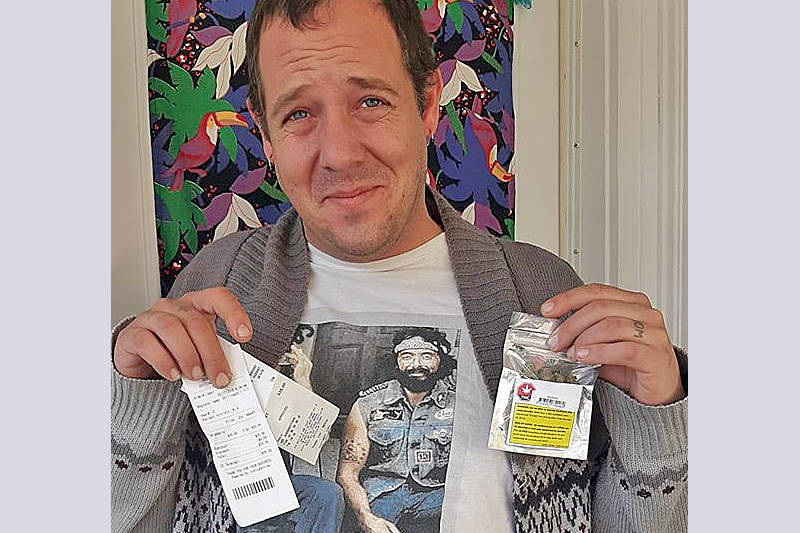 But Josh Fedoruk’s 3.5-gram bag from Indigenous Bloom was not from a provincially licensed shop

From theprogress.com link to article by PAUL HENDERSON Oct. 17, 2018

Josh Fedoruk didn’t make it to Newfoundland to buy the first legal cannabis in Canada, nor did he even drive up to Kamloops to get the some of the first government weed in B.C., but he did make the first retail purchase of marijuana in Chilliwack on the first day of legalization.

At around 9 a.m. on Wednesday, Fedoruk visited Indigenous Bloom on the Kwaw-Kwaw-A-Pilt First Nation on Ashwell Road to buy a baggie.

“Proud to be Chilliwack’s FIRST legal retail Marijuana customer on this Oct 17, 2018!” he posted on a local Facebook group, along with a photo of him wearing a Cheech and Chong T-shirt holding his receipt and his purchase. “Congratulations Canada!!!”

Fedoruk purchased a 3.5-gram pack of the blueberry strain and paid $35 for it.

“I just happened to be the first guy who rolled in the door,” he told The Progress.“It’s a novelty being the first guy on the block.”

Indigenous Bloom is one of two retail cannabis shops that were operating in Chilliwack until a few days ago. The Kure on the Skwah First Nation not far away recently closed its doors, posting a sign on the fence that read: “Temporarily closed until government licensing issued.”

Indigenous Bloom has stayed open and while it is not a store licensed to sell cannabis by the provincial government, the band passed a new “cannabis law” through their land code and they say they will be meeting or exceeding federal standards under the Cannabis Act.

In July, both local cannabis shops were raided by the RCMP who executed search warrants, but both were back open soon after and have not had subsequent raids.

Up until recently, a wide variety of products were available at both The Kure and Indigenous Bloom, including edibles. As of Oct. 17, however, Fedoruk said it was just straight cannabis.

“Everything was flower and plant-based,” he said. “They are doing everything that they are supposed to.”

Exactly just how legal Fedoruk’s purchase was may be a grey area, but he said the package he purchased had a Health Canada sticker on it, information about how users should not operate heavy machinery and how thousands of people are injured in vehicle accidents after using cannabis.

Fedoruk buys cannabis for medical purposes, suffering from chronic kidney stones. He uses marijuana as an alternative to opiates that he said destroyed his gut.

“I got addicted and used cannabis products to get off them,” he said. “I’ve been opioid-free for seven or eight years.”

He’s a big fan of the lifting of prohibition and his purchase on Oct. 17 was for the novelty of being the first guy in town. He understands it’s early days and there are many wrinkles to be ironed out. Because of availability and the lack of retail shops, price will be fluctuating for a long time as the black market adjusts.

“My personal opinion is there is not going to be a price stabilization until late spring or early summer,” he said.

As for cannabis use and the stigma, Fedoruk thinks a few years down the road it will be as normal as having a drink after work.

“I think a lot of [the stigma] is going to be lifted. Mama needs a joint should be just as acceptable as mommy needs a glass of wine,” he said. “Dad sitting in his dad chair and instead of having his beer, he’s having a joint.

“My children have always known me as a medicinal user but it’s never been in their face. That stigma in 10 years is going to change.”

A sign recently posted at The Kure off Dyke Road on the Skwah reserve. (Paul Henderson/ The Progress)